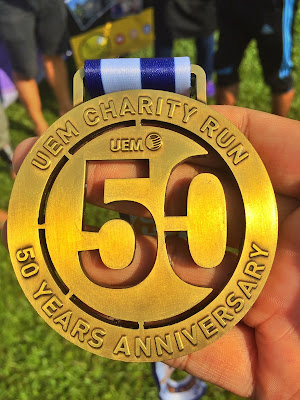 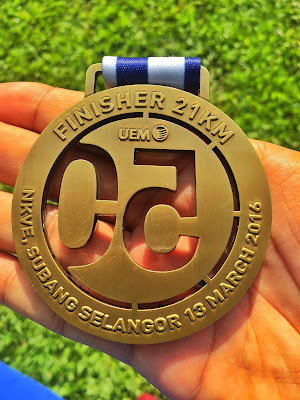 
It has been a while since I shared my experience running Half Marathon (HM) here. HM would always be my favourite distance because it was not that short as 10km and not too long like FM... Just nice, in between... Plus it did not take a longer time to complete. Normally within 3 hours max although I did 330 before hehee... Yikes! 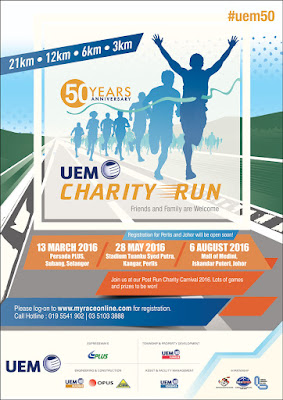 UEM Charity Run 2016 was held in conjunction of 50 Years Anniversary of UEM Group Celebration. This was their first of the three series run. The other two running events will be held in Perlis 29 May (Perlis Marathon) & Iskandar Puteri Johor (6 August)

The moment they announced about UEM Charity Run 2016, I signed up for it immediately. Not just because of its reasonable registration fees, RM60 but running along the total shut down NKVE excite me the most. Runners would feel so safe running there, hassle free. Plus we could get the flashy finisher medal along with Ultron running tee & awesome finisher tee. I'm pretty sure the newbies would more excited to join such inaugural race.

It turned out I was right. There were so many runners happened to participate this event than Bukit Jalil HM on the same day. Like they said, the more the marrier. Everybody would love to run on a new route that possess new challenges too. 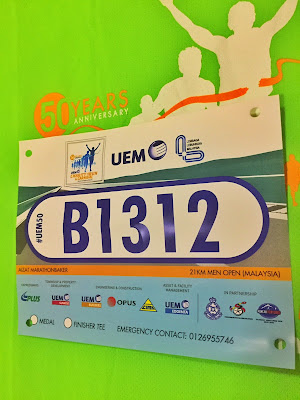 The REPC was smooth and silky. Easy peasy. I went to Stadium Shah Alam to collect mine & other Marathonbaker's ambassadors racekit.

Once again we were proud to be one of the co-sponsors for this charity run. Thanks to the organizer Puncak Venture for the opportunities. We also had our own booth for sales & promotion at the open field. Later I'll tell you guys about it ok...

On the race day, I could not sleep well the night before. Plus I need to wake up early to get a decent parking not far from the starrting line. To make things worse, I was lost in finding the nearest landmark Dataran Glomac. No thanks to the Waze. Dayumm. Wasted some time to find my way. Finally there was one parking slot near the lake.

Hurriedly prepped myself up and jogged my way to the starting line. Had 1 Marathonbaker Runbananaz before the run. 15 minutes to flag off. Met the usual suspects before gathering in the gantry. Hafeez, Lisa, Azman, Amin Jaafar & Taufik. One of them took a munch of the Marathonbaker energy bar too before running. Wished everyone best of luck before we were being flagged off by 5am.
It was a stuffy morning. I could still remembered how humid it was during the first 3-4km. I was sweating profusely. Tried to maintain my pace throughout the gradually incline route along the highway. We were running towards a curve and went straight ahead to Kota Damansara toll gate. Made a u-turn there and off we go continued running towards the dreadful Bukit Lanjan incline.

I had another Runbananaz energy ball after the u-turn and downed it up with the drinking water at the WS... Must keep on refuel because we were not even half way yet.

Once I reached the hilly part, I tend to do some fast walk. However my fast walk pace was not fast enough so I kept on shuffling and puffing my way on the incline. Had some walk breaks too actually. It was quite a mental route with neverending incline hahaa... Could see some runners performed Fajr prayer at the roadside at some area.

Finally I reached the top of the Bukit Lanjan incline & made it to the u-turn point (10.5km).  Awesome view from up here and now it was time for the effortless downhill run. Yayyy!
I ran my heart out during the downhill part. Need to compensate the time that we've lost when we ran-walked-ran up.  Just keep on moving and enjoy the scenery. Met some runners along the way. Nizam, Will & Ku Irman too.
It was getting brighter as the sun started to come out and play. I did not want to be roasted by the bright morning sun so I just keep on moving.

The last 3-4km felt like forever. U just had to stay focus & overcame the mental straight route hehee... We had to run straight ahead before making the final u-turn towards the finishing line near PERSADA PLUS.

Finally at last I crossed the FL within 3hours (My Garmin records 2:55++ hoho). Yupp, super excited coz the morning was not that hot & fully bright yet hehee... Spare me the blazing light please hihii...
Took the medal, banana & finisher tee at the end of the canopy and walked towards Marathonbaker booth. It's time to perform ambassador/promoter/cashier job with the rest of Marathonbaker Team. That's the least I could do to help them... =D

Almost everyone was here, except Cikgu Mat and Aman. Since our booth was located at the far end, we decided to do some hooha & tried to pull and attract the crowd to come & sample our yummilicious homemade energy bars.
Yim & Cikgu Syed were bringing the buntings to the front & going around the field promoting Marathonbaker. While I took the initiative dragging the mini menu blackboard to the middle of the field and walked towards the FL area too hehee... That way I could meet my running friends & promote Marathonbaker as well. It was like 2-in-1 kinda things, right? Hehee 😛✌️ 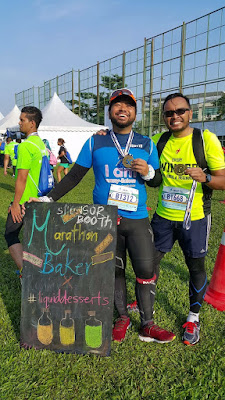 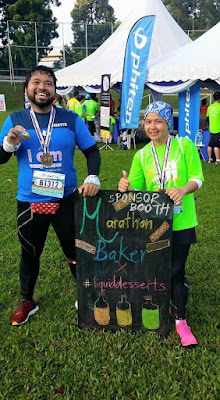 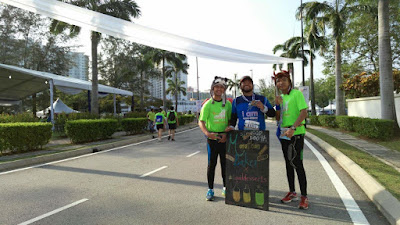 Oh we were truly privileged and honoured to meet and greet Mr Shahrom Abdullah, the national explorer, first Malaysian who succesfully completed the "South Pole All The Way" expedition. He skied 890km traversing across Antartica from Messner Inlet to Zero degree point in 37 days! Wow amazing and truly inspiring indeed! He shared some of his sub zero experiences during the expedition. Still remembered that ABC jokes hohohi! Thanks Mr Shahrom for coming by to our humble booth and sharing all the money can't buy experiences. 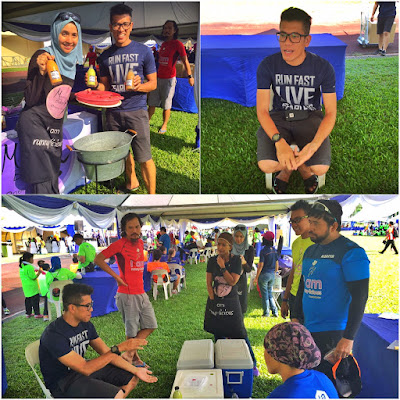 After the prize giving ceremony & lucky draw sessions (sadly tak menang pun hoho), it's time to wrap up, tutup kedai sudah. Packed everything up & off we went for a group lunch/brunch hahaa...

We had such a lovely Arabic cuisine here in Samira Cuisine. Some ordered chicken Briyani but I ordered Lamb Mandy rice was to die for. Had some chit chats with our two Lady Bosses, this was our first time having lunch with (almost) everybody in Marathonbaker Family. Thank you so much babe for the lovely treat. Will be back looking for this cozy eatery spot again since I'm a huge fan of lamb! 😜✌️


All in all it was a nice outing with all my Marathonbaker Family. Three of our Ambassadors finished running under 2 hours. Congrats to Tahira for winning the Champion for Women's Open 21km. Woot! Woot! Congrats to all of us finishers... I had so much fun from the wee hours to assisting promoting Marathonbaker energy bars... It was nice meeting all of you during UEM Charity Run 2016!
29th HM done & dusted here... Hehee.. Looks like my HM is catching up with my FM already hewhew...

Till then toodles!
Posted by eezard_vazz at 11:49 AM