Why do I run? For fun? What makes me addicted to running so much? Why should you run? 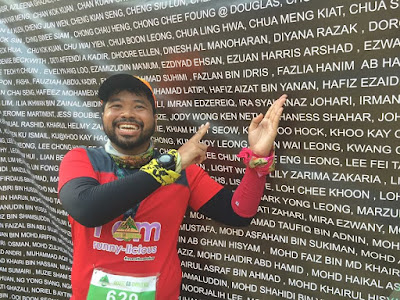 I still remembered my running journey started 5 years ago. I was super obese, 108kg, always get easily fatigue and restless. Migraine & chest pain were my best friends back then. Dizziness and feltso unfit because I seldom exercise. Used to jogging casually and played volleyball during my degree years in UKM but I did not stay active once I started working. 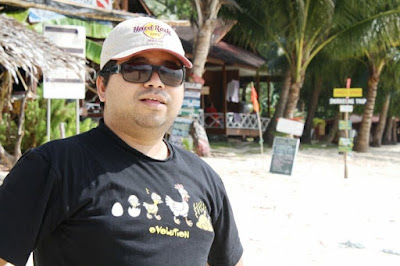 However it all changed when Rashid poisoned me with all his finisher medals & running tee. He asked me to sign up for me first running event. It was Energizer Night-mare Run 2011. April 2011. Back then, I had no idea at all on what kinds of running shoes to wear and running apparel. So I just wear my football jersey and cheap brown Adidas shoes which I bought during a sales in Suria Sabah, KK. Hahaa... Such a cheapo! LOL 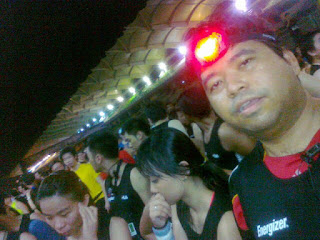 We had to run Sepang International Circuit twice to complete the 11km distance (1 lap = 5.5km). It was tough. I huffed and puffed along the way. I still remembered that I ran with one big 100Plus from the WS during the 2nd loop. Hahahaa! Xpernah dibuat dek orang. =D

After the run, we had to queue such a long bee line just to get our finisher medal & goodie bag. All the sudden the crowd started to create a riot & swarming the medal/goodie bag station. Hungry impatient tired runners were angry runners. I could see some goodie bags were thrown mid air, just like we were in a refugee camp waiting for the aid. Even the policeman or security came to control the situation. It turned to be a disastrous nightmare for first timer like me. Definitely unforgettable. I went home empty handed, quite dissapointed. Later on the organizer did refund the fees & couriered to us all the entitlements but the damage has already done.

However that did not dampen my spirits to stop joining running events. I has been bitten by running bugs already. I ran almost everyday especially when I studied in USM Minden Penang. The track was my bestfriend & I even ran around the campus during the weekends. Running is my therapy after a long day in the lab. Stress free totally.

With lots of running & strict less carbs diet, I managed to lose 22-24kg from 108kg to 84kg in 2014. Tried Herbalife before, did not suit me well. I felt a lot more confident, more energized and no more heavy migraine & chest pain. Super Yeayyy!
Rashid introduced me to his ex-colleagues from UMBI UKM & Inno Bio during every running events and the rest was history. Team We Are Runners (WARs) was my first running group. Although we seldom training together but we always make time for Breakfast Day Run @ Picnic. Rashid, Aafong, Fadhil, Haniff, Raja Del, Ariff & Abu Bac, Kamal, Meg, Maz and Fard Jill. We've came a long way... 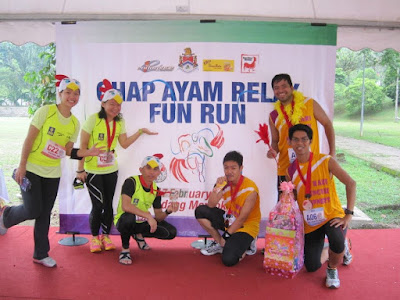 My first Half Marathon event was during BSN Putrajaya Night Marathon 2011. I was tempted to try this distance for the first time because of its alluring red Brooks finisher tee. I managed to complete it within 3h25m if I was not mistaken. It was tough. I had several cramps & chafings along the way. Unprepared with any energy gels too. I could still remembered that I could not walk at all after I've finished the run. I took off the shoes immediately. My feet were killing me at that time. Hahaha! Truly unforgettable moments. Rashid & Kamal were there waiting for me & became my witness. After that the rest was history. 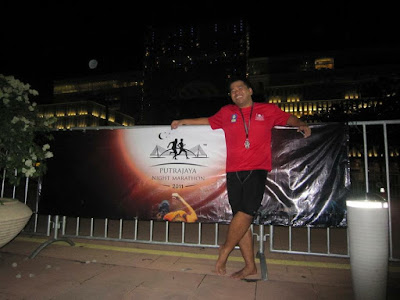 After I hooked up with several HMs events, such as Taiping "International" Marathon, Seremban HM, PBIM 2011, PJ Dawn & SCKLM just to name a few, it's time for me to take up the next distance just to challenge myself. The terrifying daunting Full Marathon! Jeng... Jeng... Jeng...

At first I did not have the guts to register for FM but after I was confident enough to finish my first FM within 7hours cutoff time during Asics Penang Bridge Internatonal Marathon 2012. Despite improper structured training, I finished my first FM in 6h23min++. Had several cramps & nearly hit the wall moment but I persevered haha! You can read all about it here. That was definitely my life changing moment. From there, I became so addicted to run as many FM as I could year after year. I even travelled solo to run in Ayutthaya Marathon in 2013. I had my PB there. It was an amazing run! I love running in Thailand so much although the street dogs were a bit intimidating & loud, hahahaa! 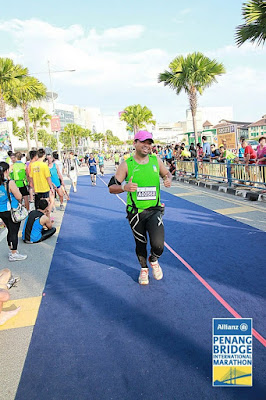 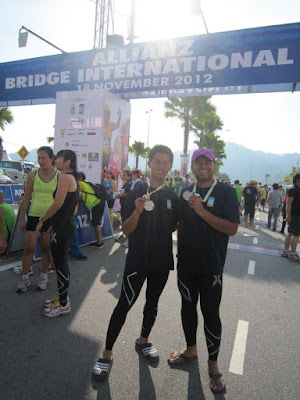 Tokyo International Marathon 2015 was my first Abbott World Major Marathon (WMM). Applied it through ballot system and mine was selected to participate along with other 35,000 runners from all over the world. I was super thrilled and excited as I've never run in Japan before. Especially in Tokyo. I trained so hard and really really hope to finish within the 7 hours cutoff time. The atmosphere during the event was unforgettable. It was super happening with so many cultural shows, choirs, dances, cheerleading and musical shows along the route. Even the spectators were amazing. I could not stop from giving high fives and said thank you to all the public who kept on cheering at us along the route. It was nonstop. I felt my smiling muscles was cramp from smiling and wishing back at them along the way. So many things to see and saviour along the way. They were very generous in providing us with so many sweet tit-bits & drinks throughout the route. I was so relieved that I crossed the finishing line in 5h53m42s. It's a Sub6 y'all! The weather was cold just nice for a run. 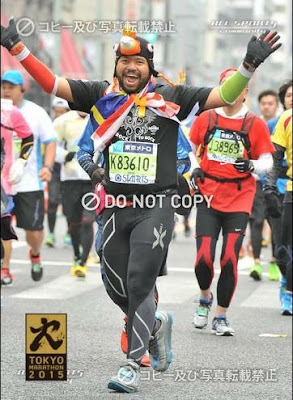 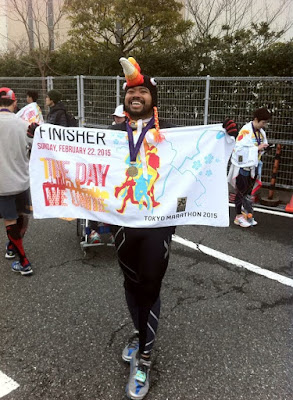 After all the full marathons that I've paricipated, now it's time for to come out from my comfort zone. I want to feel what it was like to go beyond 42.195km. Will I crumble and falter? Will I triumph and succeed? How does my body will react to those ultra mileage? How far can I go?
Therefore I was determined to sign up for Back 2 Endurance 2013 (B2E). More details HERE.... =) 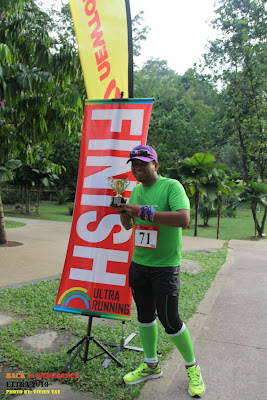 Received my first Silver trophy in B2E 2013... It was tough mentally & physically huhu...

It was my first Ultra race. Basically you have to run as many loops as you can within 12 hours cutoff time. One loops was around 2.3km in Lake Garden. Luckily the weather was not that hot during the race day. There were so many photog during the day that I really enjoy pushing the limit. Had a quick KFC for lunch break. U can read all bout it here. My feet felt like burning from pounding the hot tarmac/concrete path. Hahaa... Bad choice of running shoes, perhaps? Ah well, I managed to get that Silver trophy for nailing 50.5km after been running 23 loops! Yayyy for me... Got my first finisher trophy... I think I should make a comeback soon for this B2E race. Next year je lah...


TNF100 Thailand 2014 was my first 100km duo category. Teamed up with Dr Razinah, both of us endured the crazy hot + madness 50km trail route. The view along the way was definitely breathtaking & spectacular. The hills were alive. The heat was unbearable. Felt like running in Gobi dessert. Hahaa! Thank goodness we finished the run injury free in 19h40min++. Although we exceeded the accumulated cutoff time of 18hours, we were glad to finish our run in one piece. Heard there was a runner who had a heat stroke & hospitalized on that very day. Such a priceless trail ultra experience for me. You can read all about it HERE... 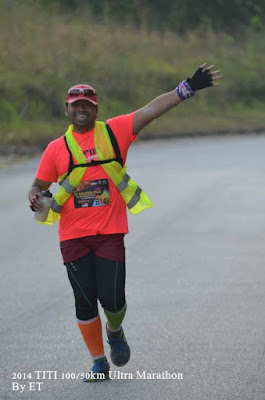 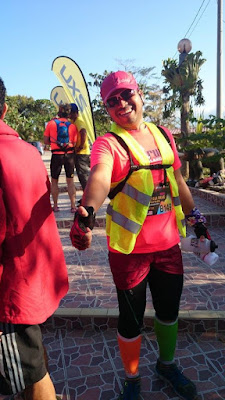 TITI50 Ultra 2014 holds such fond memories for me. That was my first 53km ultra road event. After I went through the route map & elevation, I signed up for the early bird rate. This event was one week after TNF100 Thailand, I was so thankful that I could still run after the huge mileage last week. I love being flagged off in the midnight. It was cooling thanks to the heavy downpour in the late evening. Felt like a dream running towards the famous Genting Perez, Jelebu. Oh I still remembered I was running like a headless chicken coz I want to chase the cutoff time 9hours. The last downhill run was epic! So grateful to reach the FL under 8h45min. Hurrahh!

However my running ultra journey was not all filled with sunshine, rainbow and unicorn, all dandy... my first DNF was during Penang Ultra 2014 84km. Yes I was insane enough to run around the island 84km challenge. Blame it on my under training, mileage and not so well prepared hahaa! DNFed at KM48 2km before the next CP @ KM50... Lesson learned the hard way... I was so freaking tired that I slept in the sweeper bus all the way to FL & continued my beauty sleep in our hotel.  I slept like a log! That shows how tired I was... Hoho!
Since then, I had experienced several more DNF episodes. GNU 2015 (reached the FL 15min after cutoff time), R68 Challenge 2015, Pink Ultra 100km Duo 2016, Kyoto Marathon 2016 & recently Putra 24 H Challenge Run 2016 hoho! I had to admit that DNF was sucks... It felt bitter but I have to accept the fact. Suck it up. Reality hurts. There were so many factors. All I have to do is identify the main causes & overcome it in the next edition. There's no short cut to success yaa... U have to earn it yourself. After all, it was not the end of the world. We grew wiser and better from them. 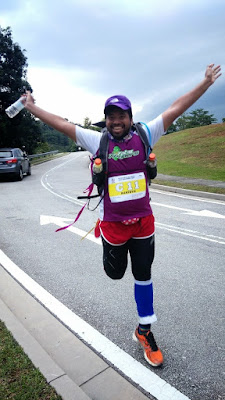 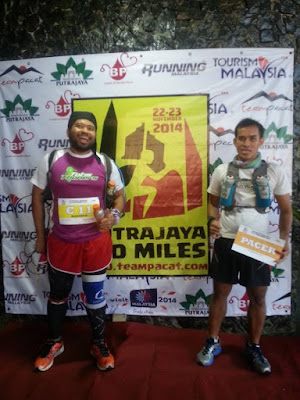 Putrajaya 100 Miles 2014 was my first virgin 100KM Category. I did not know why I signed up for it in the place. Still remembered that Arman, Sis Suzie & late Abg Zack had faith in me and encouraged me to take the challenge. The experience along the route was truly priceless. Nearly hypothermia, blisters galore, chafings, bloody heat challenge, sleepiness. It's all mind over matters. I'm so glad I had Ben as my pacer for the 2nd half 50km. He pushed me to keep going no matter what. The final 20km felt like forever. I could not walk straight because of my blisters & sleepiness. I just want to lie down anywhere & doze off! Finally managed to complete my Epic 100km journey in 25hours++! Syukur Alhamdulillah...

I'm very thankful to have so many positive person along my running journey. Those who are never stop cheering up for me, those who are truly believed in me. Runners are very special person. They were very optimistic, never give up so easily, stubborn bunch I must say. Thanks to all your critics & comment hoho!


So what's next? All in all, after 29 HM, 28 FM & 13 UM, including all the DNFs in 5 years of running, I think I will keep on running no matter what... Just want to have lots of fun while running regardless of the distance. I was thinking of doing 100km again soon when I'm ready for it. Still have no guts to try 100km trails knowing that u have to train lots of time running and hiking in trails & mountains. That's a HUGE commitment. Yikes! 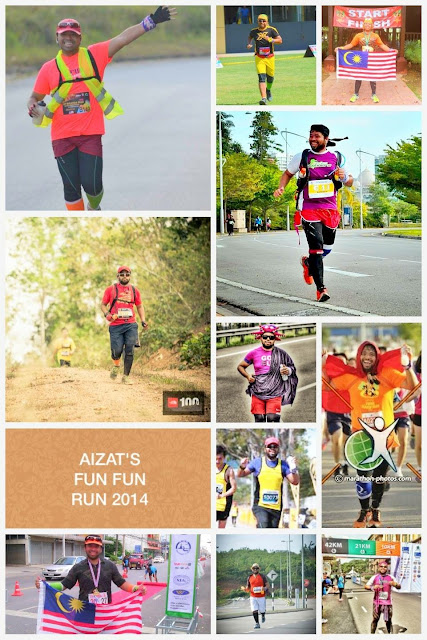 Running is fun... Running never ends... Never let anyone take the fun out of running... Regardless of the distance... Till then, toodles! 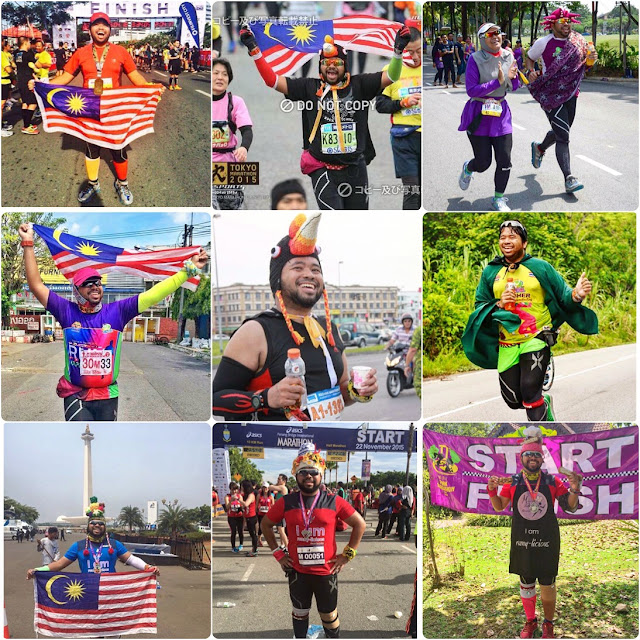