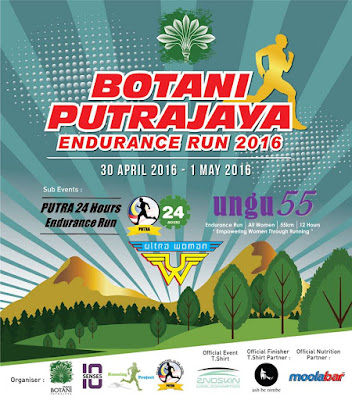 Hola! A little a bit introduction about this event. Taken from the website. Botani Putrajaya Endurance Run (BPR) was a road running endurance event for runners. BPR comprised of two events, PUTRA 24 and UNGU 55. The first of its kind running event in Malaysia, a unique inaugural race experience in Botani Putrajaya Park. Since I only joined PUTRA 24, I'll share my running experience about PUTRA 24 yaa...

PUTRA 24 was an inaugural 24 hours endurance running race around 5.5km loop inside Taman Botani, Putrajaya. This race is open to all genders and nationalities.
The main objective was to promote endurance running inside the beautiful Putrajaya Botanical Park. Furthermore, this race was held to create awareness towards appreciating nature and promote activities to save our nature and rainforest.
It’s a 5.5km loop route inside Botani Putrajaya Park with a Cut Off time of 24 hours. Runners with the most distance covered within 24 hours will be declared as Winners. Absolutely no pacers allowed.
For the record, PUTRA 24 was my 13th Ultra run that I participated since 2013. It was held in Botani Putrajaya Park, from 8.30 am 30 April - 8.30 am 1 May 2016. I was very excited at first knowing that I would be doing loops after loops in this beautiful pristine Botani Putrajaya Park. Since it was an inaugural event, I would definitely love to give it a try.
My running buddy Hazman encouraged me to sign up for it. Thanks to Running Project for giving me the opportunity to run this inaugural event. I would love to see how far I can run during the 24 hours time. How well I could run especially during the wee hours from 12 midnight until 8.30 am. Let's put ourselves to a test, shall we!

Reached the starting venue around 7.30am. Had one Marathonbaker RunBananaz energy ball before the run. Met so many familiar faces, old & news friends. Everybody seems to know everybody. Love the small number of participants. Just nice for a starting place at the iconic wooden bridge towards Visitor Information Centre (VIC).

We had a briefing session by Race Director Razif Yahya at 8am. We were informed that in order to get the finisher entitlements, we had to run at least 11 loops. 1 loop is equal to 5km. However they soon changed the minimum distance rules to 12 loops since they realised it was 4.6km per loop. So 12 loops x 4.6KM = 55.2KM. Easy maths, right?
The flag-off was being done by President of Perbadanan Putrajaya, Dato Seri Hasim Ismail by 8.30 am sharp. We ran towards VIC and went left towards the stairs & another wooden bridge below. It was pretty wet & slippery so we had to run gingerly around this area.

Then off we go running the concrete stretch along the lake. There were so many things to see along the way. Beautiful roots, unique tropical trees, some colourful flowers and I saw some squirrels playing around the trees too. There were many shades along the lakeside stretch.

The weather was just nice, ideal for a morning run. But not for long, it was getting hotter around 10.30am. The endless concrete stretch will lead us to the big tunnel ahead. After the tunnel runners will have to run a little bit of incline in order to reach the u-turn point. There were timing mats at the nursery area.

After the u-turn point, I ran uphill towards the greenhouse and went right downhill going back to the tunnel. The hill was a bit steep & will be quite challenging once you have done 6 loops and above hehee..

After the tunnel, runners had to take left towards the slightly incline stretch. There was a public toilet & resting area here at the right side. U just need to soldier on to reach the wonderful garden after the incline. I could see some stingless bee hives on the left side among the fruit trees. It's like running in the nature.

I was so happy upon reaching the garden within the fence. The WS was there to provide some hydrations and some food to the runners. Plenty of bananas, watermelon slices, kaya/planta sandwiches, biscuits were served at the WS. The 100Plus isotonic drinks, Coke & red sweet syrup drink were provided too. Icy cold. Enough for all the runners. After had some drinks and refilled my bottle, it's time for a home run down and across the wooden bridge. That's one loop. Just keep on repeating the loop. Run - Walk - Jog - WS - Repeat. =D
I managed to do two loops in the morning because I had to go out and attend some family matters. Family First yaa... Could not argue much... Hehe... I heard there was a heavy downpour in Putrajaya with thunderstorms. Looks like the weather forecast was correct after all during the race briefing. 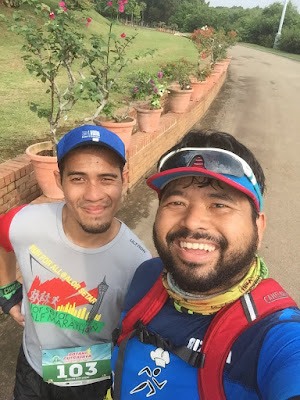 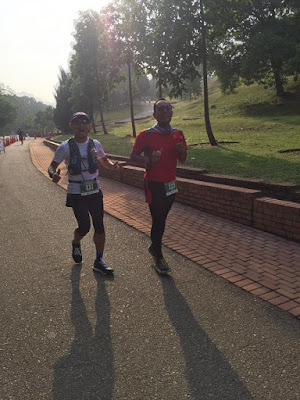 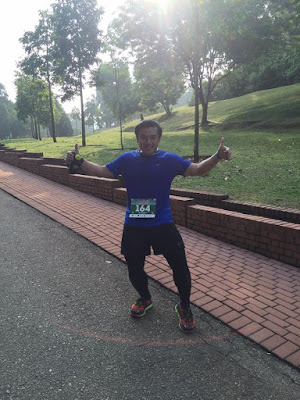 Here were some of the pictures that I managed to snap during the first loop...
Go Go Rudy, Ucu Aman, Shamim & Izwan Mambo!

At last I managed to reach back at the starting line to continue my run. It was already 12.30am. Time was ticking away. All I need to do was to run as fast as I could to compensate the time I've wasted before.

Running in such wee hours possessed its own challenges. Besides sleepiness, you had to be extra alert with your surroundings. The moon was visible on that night. Orange moon was a true beauty up high in the sky. There were some dark stretches along the way. Some of the lamp posts were not functioning. Luckily I brought along my trusted powerbank torch light to light my way & blinker for safety purposes.

Running on the concrete stretch felt like never ending especially at night. I could not see far due to the low visibility. Even if I flashed the route with my torchlight. That's the only part that I dreaded the most. It's good for your mental & physical endurance though. Hehee...

I heard so many creepy sounds coming out from the forest especially around the u-turn point. I kept on reciting surah Kursi & zikr while running towards the dark eerie stretch. Could see some volunteers were sleeping in the building nearby. Poor thing. They must be really exhausted manning this area and the timing mat devices all day long.

According to my plan, I intended to do 11 loops but somehow I was running out of time. I did some calculations while running and I had a new target. To complete 10 loops before 8.30 am 1 May 2016. It was doable until I had a very serious cramps on my hamstrings and calves on my 9th loop. I could not even walk at all. It was sooo painful. I really had to blame myself for not preparing any ORS sachets or salt sticks with me. I was looking for a place to rest for a while. Then I saw this leather cushion seats near the building by the lake. I was thinking of having a 5-10 minutes break when suddenly I dozed off for about 20 min++. Damn... I woke up when I was feeling so cold due to wet sweating tee and morning breeze.

Looking at my watch, I knew that I could only complete one lap before the cutoff time. I just walked all the way until I reached the tunnel because I did not want to have cramps attack again. Tried to run a bit. No more cramps. Looks like muscles were already relaxed. I just jogged my way towards the WS when I bumped into Dzul Izwan. We speed walked together. Congrats on your 24 loops ya bro! Amazing Top 6 placing woo! Kudos...
Finally I crossed the FL before 8 am hehee... Sadly I had to DNF this nicely organized event. Hutang 3 loop saja lagik nih... Adeii... It was definitely doable if I started 2h30min - 3 hours earlier than my midnight run for 3 more loops. Ah well there's no need to regret. My time management sucks. Period. However I've tried my best. I ran with my heart out. I did not cheat my way for the Ash Be Nimble finisher tee and finisher mug. I'll take it, 9 loops = 41.4km (My Garmin watch recorded 45km) as my longest run and mileage for this coming FM in Thailand. I did enjoyed my run, morning & night. =)

Congrats to all the top winners, finishers for PUTRA 24, Ungu 55 & Ultra Women category. You guys were amazing. Truly inspiring indeed. Thanks once again to the all the selfless and dedicated volunteers, supporters, photographers, crews and organizers, Running Project,10 Senses and Taman Botani Putrajaya,  for organizing this smooth inaugural ultra run event. However since it was the first edition, there were rooms for improvements for the next year's edition.

1. Plenty of food & icy cold beverages for all the runners. The support crew was amazing and efficient! I love it the most!

4. Generous amount of buffet spread for lunch, dinner & breakfast for everybody. I heard the Tau Foo Fah was the best seller among the participants. Lariss uols... Yums! Love the spicy Nasi Lemak Rendang Kerang & Sambal Sotong! Yummeh!
5. Clear direction markers along the route during the day time only. You could never get lost along the route.

6. The crews were checking up on the participants with their motorcycles and cheering on for them too.

1. Some parts were slippery, need to be extra careful and put some signage/signboard. Even the wooden bridge before the FL had some uneven steps protruding. I had to run gingerly at some parts.

2. There were no blinker/reflector at the safety cones and direction markers. The cones were difficult to be seen at night.

3. The organizer was very lenient when I could see some runners & lady runners ran without any headlamps or hand torch. The briefing about not wearing mandatory items like headlamps will be disqualified, (DQ) was that just for formality? I wonder...  Mandatory items are meant for safety purpose if I'm not mistaken.

4. There is no water supply at the restroom near the u-turn point at the Nursery area. Did no. 1 business there during my morning run. However I had to do no.2 business in the toilet during my night run and had to use my drinking bottle. I just could not flush away. oops sorry for that! They only provided one tank of water at the urinal area. Well, not so many water left actually inside the bin.

6. Hopefully they will provide finisher medal for the next year's edition. That would be a very nice momento for all the runners who kept on pushing themselves for 24 hours. Maybe with some options with or without event tee, perhaps? Just some suggestions from a mere mortal like me.

Well, that's all for now. I had so much fun running and encouraged each other too since we're running loops. Will definitely be back next year to finish what I've started.
P/S : For more pictures and results, feel free to visit their Facebook page Running Project and Pixeo HERE
Posted by eezard_vazz at 10:42 PM