Once the date for the 4th edition for 5F Running Movement by ULTRON was announced,  I immediately signed up for it. Because I missed joining the 2nd and 3rd editions which were being held in Taman Tasik Cempaka Bandar Baru Bangi and Taman Saujana Hijau Putrajaya. Plus it was the last edition before they took a break during the fasting month of Ramadhan. Would not want to miss this one for the world. And I really really missed running at Taman Tasik Permaisuri before. The hilly parts, the flat around the lake part and the number of runners, joggers and walkers alike coming here. Either with family members, friends or individually. So it brought back sweet memories back then. 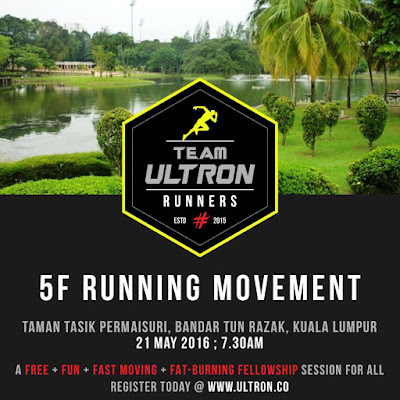 On Saturday morning, 21 May 2016, it was still raining when I woke up. Even though it was a drizzle but I was hoping it would stop raining circa 7 - 8 am at the venue. Prepping myself and I left home by 6.50 am.

Once I reached the parking lot near the main playground, I saw Capt Ariff Blaze was looking for the venue. At first I just wanted to jog my way to the rendezvous point but I decided to show Ariff the actual venue.

We arrived when everybody was already there waiting for us. 26 participants turned up on that very cloudy wet morning, including my old running friends from We Are Runners (WARs). Long time no see folks! Quite a crowd of running enthusiasts, I must say. Many familiar faces were present during this 4th edition event.
As usual they started the routine with a warming up session, lead by Capt Abu Bac. Then off we went running the normal loop around the lake and up the hilly part and went down towards the starting point.
Taman Tasik Permaisuri's running track was  still under renovation and some facelift. So you had to be extra careful when you ran on the punctured track. The holes were pretty hazardous.

Once we finished running one normal loop, around 3.5km, now it was time for the most anticipated fun part. Playing games time! Yayyy... Let the game begins!

But before that Ms Joanne Kay, the founder and CEO of ULTRON gave her welcoming speech and announced that there will be some prizes for the Top 2 Winners.
It was called, "Semakin jauh, semakin sayang" or we called it the "Distance makes the heart grow fonder" hohoho. The participants were divided into 6 Teams. Basically all they had to do was to pass the water balloon to the team mates on the other side. Once the team mate received the water balloon safely, they had to take one step back and threw it back to the 2nd team mate. The team with their water balloon burst will be disqualified.
I was on the same Team No.1 with Capt Rashid, PM and another guy ~ I forgot his name was (yikes - sorry!) but familiar face though. PM threw the balloon so high and fast but Capt Rashid could not catch it properly so the water balloon fell and burst beside me. Therefore we were the first time to be eliminated from the game. Sigh... Tough luck =P

The other team were tossing the water balloon carefully despite the distance between were growing apart. Some of the balloons were so difficult to burst even though they fell hard on the ground. Very durable! Belon kebal nih hoho...Then it all came to the final two teams to determine the Champion for this finale round. After several toss and catch, Team 3 was the last team to burst their balloon! So terror one!

The winning team received ULTRON Micro-Dry Champion running tees while the 1st runner up team received the Australian made neck wraps. Congratulations to all the winners! You did great! Woot2!
For the rest of the participants, they did not go home empty handed. Instead each one of us received ULTRON e-voucher worth RM10 for every purchase of ULTRON merchandise and running apparel. Thank you ULTRON!
After the prize giving ceremonies. It was time for the group photo session. We took lots of pictures with Joanne and the three Team Ultron Captains. They also did that Pose Gaya Aizat. LOL! Thank you guys for admiring & acknowledged my unique signature looking over the horizon pose... Hohohi!
Later on, it's time for a group breakfast! Me & WARs group went to the Pasar Tani and bought our breakfast meals. Joanne went along with us but she could stay for long. So we sat at the wakaf hut by the lake enjoying our breakfast together... Catching up on the latest stories on running events and all sorts. We were even planning our buka puasa get together at my house during Ramadhan! Erk that one I had to reconsidered it thoroughly first yaa...

I stayed on and did another 4.5km walk - run - walk, sightseeing pace around the lake while waiting for Mis Fid from MisFydKrafts to come and deliver my SuperVillain costume hohohi.... Thanks a lot Fid for all your hard work. Could not hardly wait to flaunt it during Superheroes Race 2016 - Overload... =D
That's all folks! Congrats to Joanne Kay and all her Trio ULTRON Captains for a successful 4th edition Running Movement. See you again in July as the 5F Running Movement will take a break during Ramadhan.
For more info and new updates on 5F Running Movement do follow ULTRON on Facebook, Twitter @Ultron.co and Instagram @ultron.co . You can even sign up for the next Running Movement in July HERE.

Toodles! Thanks for reading folks... =D
Posted by eezard_vazz at 3:31 PM