Hello there dear fellow readers and followers, mostly my hardcore brother and sister runners... It is New Year's Eve already and I'm sooo getting nervous for what I might be facing throughout this coming 2013. It will be my Ultra year, Insha Allah, hopefully. Therefore in order to tackle the Ultra distance marker of 50KM head on, I've decided to take up this Newton Challenge Malaysia 2012, my Half Ultra challenge. It was my closing running event of 2012, the grand finale of this year (so-called). I'll share with you guys the chronology of my race review. =D

I went to collect my racekit and Rashid's on the very first day, 27th December 2012. It was a very hectic day where I had to make several rounds at the carpark area in Midvalley to search for a decent parking space. It took me 1 hour to be able to do so, since it was school holidays + Christmas holiday spirits (still) + lunch rush hour. However the racekit collection went smooth like a breeze. Awesome!

On  the same day, I've received my so-called "Christmas present" from CIMB Clicks via courier for being the winner of a football campaign that I never know I participated in, perhaps a random CIMB Click user, just like a lucky draw. Sooo lucky of me. It was really cute and it came in red and white, just like a Santa Claus with tentacles LOL... Thanks a lot CIMB... U made my day... =D
Fast forward to the day before the running event, as usual I had my 'Carbo aka cholestrol loading' lunch meals consisted of blazing hot and spicy Pecel Lele, several deep fried tempeh chips and taufoo at my favourite ever Pecel Lele Mandrem restaurant in Hentian Kajang. It was awesomely hot... i was sweating like a pig devouring those mouthwatering delicacies. @..@ For an early dinner I had a chapatti with Tandoori chicken nearby my house. Super yummeh!! =) 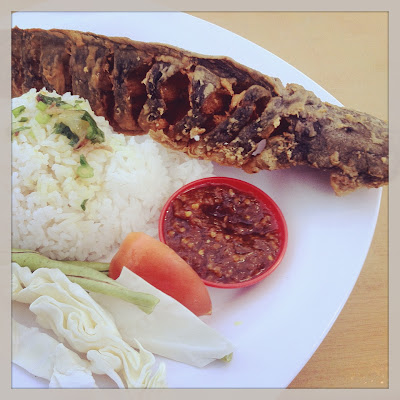 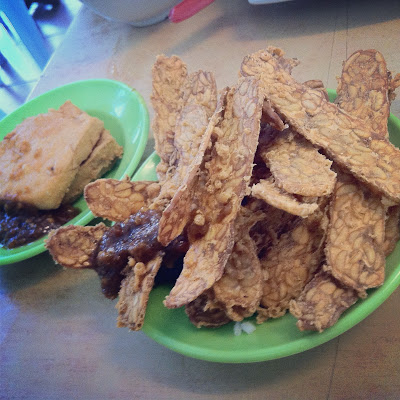 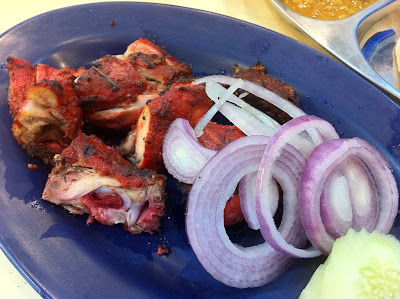 On the Eve of the event

I did risk myself to jeopardize my performance the night before the event, where I've agreed to go for a friendly volleyball games with my fellow FB Sharkz group friends. Why? Because I haven't seen them for a long long time due to personal, running and work commitments. It started around 9pm and was supposed to end around 12pm, but I decided to go home early around 11.15pm. Since I have never been playing volleyball for a long time, I suffered a very sore arm muscles after the games. Goshh! Plus, I felt hungry after the games too... Looks like my energy have been depleted but I kept ignoring it before I went to bed around 12.30am.
Around 3.45am, I woke up, wide awake, felt a bit thirsty, dehydrated perhaps. I still felt sooo tired, sleep deprived totally. I struggled to gather all my running equipment and apparels after I had my shower and done doing my number 2 business. By 4.30am, Rashid and I rushed to the running venue. We arrived around 5am.  I was feeling blur + superjittery that I forgot to bring my energy gel (Dammit). Luckily Fadhil, one of my WARs companion offered his extra gel. I even brought along 2 small bananas in my utility waist bag. I also forgot to fill up one of my bottle with isotonic drink (Gatorade my favourite). Instead, I only filled plain water in one bottle while ORS water in the other one, which I regretted it the most throughout the end of the race. T..T
We were being flagged off on 5.30am sharp, I guessed so. It was a huge running crowd as it took me and Rashid 3minutes before we crossed the starting line. I tried to start running at my comfort pace for the first km, around 5.35 min per km. Then it dropped to 7'28'' around KM3. At KM5, I decided to go for a Subuh prayer at Pangsapuri Enggang Musolla since it was already around 6am by that time. After that it was time to meet the renowned Ammah Hills. It was still dark when we first tackled the rolling hills. Not that steep but doable. I struggled to catch up with the back pack after my Subuh prayer and maintained my pace around 6'43''. I managed to clocked in 1:17:15 for my 1st 10km. By that time I saw many 12km runners started to tackled the hills as I was running downhill.

Later on, I ran towards the Esso station and I passed by my old rental house in Taman Puncak Jalil 5, I guessed so. I tried to survive the next 10km as I was getting lethargic and really really hungry as I ran on plain water and ORS with no Isotonic drinks being served so far. Only at 13KM WS did I managed to had a gulp of 100 Plus. I was running out of my juice and mojo around 21KM marker. I felt like I started to hit the wall mentally.
It was 2:40:24 with 9'23'' pace by that time, my worst timing for HM distance this year (T..T) but I kept on running even on a labi2 pace... LOL... Even Azim started to overtake me by then. I couldn't being able to catch up with Kak Lina, the Polca-Bat-Wing-Ears runner who was running steadily and strong at 500m in front of me during that time. The final 2KM felt like forever to reach upon. Thank goodness the tormenting experience was over as I reached the under-distanced 25KM (24.48km) finishing line at 3:07:14 Yayyy...

Although I've targetted my finishing time around 2.45 but I have to settle with the 3.07 finishing time. I really paid a HUGE price of playing some volleyball matches back-to-back with the running event. My energy was depleted and I didn't do anything to top it up before the race. I learned my lesson the hard way eventually... That's it no more extreme sports before any endurance race. I'm not an Ultraman yet... LOL!
After the run, I got my sweet finishing medal, took down several 100 plus cups, missed all those succulent watermelon slices as I finished late (3hours++). My legs were killing me that time. It was like Brooks HM 2012 dejavu all over again for me.

Then it was time for post-race photoshoot session for all of us. I took some pictures with Kak Lina and Abang Zaini, Gus Ghani, Izwah, Kak Nannoor and her hubby Abang Ib, my fellow WARriors and last but not least, the legendary famous Ultramarathoner (160miler), Sifu Ultra Rayzeef. It was an  unexpected rendezvous  for being able to have a meet and greet session with the legend himself. Truly really inspiring just by reading his running blog all these while. It felt like a dream, just like meeting some Hollywood celebrities (James Franco,Mariah Carey,Madonna,Nicki Minaj,Brangelina just to name a few) LOL... Sempat lah ambil berkat dan aura ultra dari Ultra Ray semalam... huhuu... Owh by the way Congratz for your Newton Ultra Challenge with an super awesome timing of 5.15!! Full RESPECT Bro!! I was blown away amazed!

Overall, tt was an awesome running event, the weather was sooo nice and kind on us, it wasn't blazing hot at all on that morning. We were truly blessed as it was an overcast sky and we did start earlier compared to the previous edition. The rolling hills were entertaining me throughout the race. All I had to do was blaming myself for not being able to finish strong yesterday... Sob2... It's ok then, looks like I have to beat this personal record of mine next year then... Bring it on NEWTON 2013! =D

Happy New Year 2013 guys... And enjoy your holidays too... May this coming 2013 will bring us more challenges and hopes in our journey to pursue more PBs whether for our HMs, Maiden FM, FMs or even Maiden Ultra to come. As for me, I'll expecting more Marathons and Debut Ultra for 2013. Insha Allah... Cheers y'alls!!!
Posted by eezard_vazz at 9:53 PM