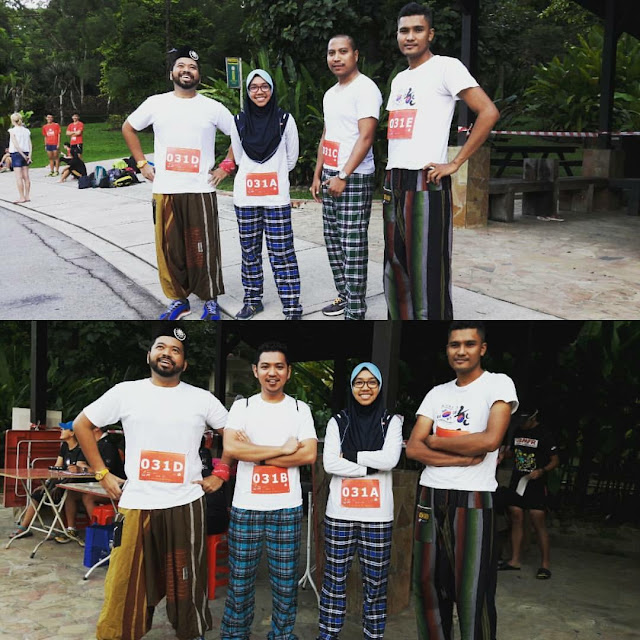 For the record, this was my first Pacemakers Anniversary Relay run for the 2nd Series... Normally I just ran the first series since PAR X in 2014... Pretty excited since I heard they normally would tweak and change the route here and there especially for the 2nd Series... Bring it on then! 😁✌️

As usual without fail, Team Chap Ayam Runners took part in every PAR XII both series this year by sending 3 teams for the 2nd Series. I tell you these runners loved the challenges of running a fast pace Relay in the holy month of Ramadhan... That's insane!
My name was in Team Chap Ayam Runners 3, along with Aeishah, Shaiful Nizam Bomba, Rhuddy Alang and Zam Mohammad. This was the same team for PAR XI  1st Series last year. We decided to pick a simple theme for our team. It was Malay Classic white pagoda shirt with pelikat pants. No pressure at all, just want to enjoy the run and route. Plus, running in a pelikat pants was not that hard. Still runnable hehee... Just like what I've did back then during Hatyai Marathon 2014.

On that Sunday morning, I woke up early to had my pre-dawn meals. This time around I had a proper heavy meal knowing that I had to run with lots of energy. Drank lots of water too. Downed one m-prolabs alpha capsule for the boost I needed.

After Fajr prayer, I dashed to find a perfect parking spot near National Memorial. I put on my songkok with a shiny bling-bling brooch just to complement the Malay Classic theme. Just like in P. Ramlee era hehee...

Jogged down towards Lake Garden and met up with the rest of the team. I was the fourth runners. Yayyy... Syukurr! Way less pressure compared to the first series LOL! But still I need to outdo myself too no matter what...
We took one group photo first before the Relay started. Mr Rhuddy was running a tad late but it's ok because he's the third runner.
The runners were released on 7.30am sharp. They dashed like mad I tell you. Looked like less participants in the 2nd series compared to the 1st one. They have reversed the route this time.

While waiting for Aeishah, our first runner to reach the transition line, I just hang out and snapped some pictures of familiar faces taking part in this event. I was truly inspired to see most of the Muslim runners ran their heart out and finished strong!
Not long after that, I could see Aeishah finished her run and Zam took the baton as the 2nd runner. She could not stay long because she had a class to attend on that morning. My tummy started to feel a bit uncomfortable and I had to relieve myself first. Fuhhh so glad I was the 4th runner, still got plenty of time for nature call... Lega rasanya! Done with my "Second Wave" LOL!


Rhuddy was a strong runner and I had to get ready in the transition area any time now. Waiting anxiously for my turn when I saw him running towards the finish line and looking for me. Once I received the baton, now it's my time to shine bright, like literally... LOL!

I just dashed my way towards the first 200-300m before we had to run up the hilly stretch. It was still runnable at this point, so I just braved myself for it. The normal undulating hilly part was killing my calves hahaa... Fast walked a bit when it got steeper and steeper until I reached the neverending stairs. It felt like forever to reach the top. Just keep on tackling the stairs. Very doable but my heart was beating like crazy. After that it was all going downhill. 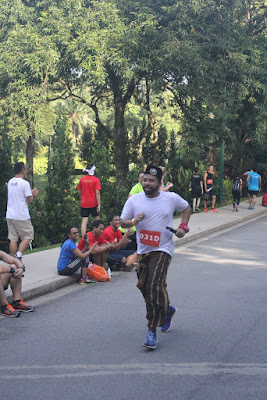 After I ran passed the building I had to run across some concrete path. It was a neverending up and down route here. Mini rolling hills I must say hahaa... Just run lah (cursing myself deep inside at the same time! 😝🙈) 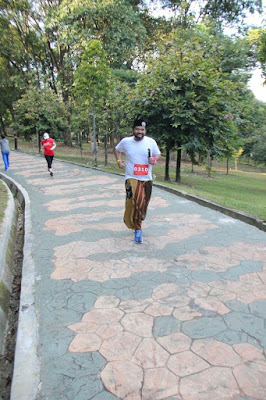 Still could not see the Finishing Line but I sensed that I was getting closer and closer as I ran the last downhill stretch. Saw several photographers were stationed at this part towards the Finish Line. Once I handed the baton to Shaiful, my suffering moments were over! Fuhhh...

Walked a bit to lower down my heart rate and breathing back to normal. Almost see some stars after my turn was over. Went to the loo to wash my face before joining them chillaxing at the nearest hut.

Once Shaiful has reached the Finishing Line, he gave me the baton and I went to the organizer's canopy to collect our finisher medals. Went to tapau some breads too for my team mates hehee...

I went to tapau two packs of nasi lemak for my breaking fast, as always... Hoho! Then went back to take some photos with the runners from other teams.
The competition for best dressed team was getting tougher for these second series. The No. 1 Best Dressed Team was wearing traditional Chinese wedding dress while then No. 2 Team was wearing the Malay wedding songket! No. 3 winning team was the Teenage Mutant Ninja Turtle Kids hehee...  So creative of them! Kudos guys!
Congrats to all my team mates for finishing strong. Although we did not win any trophy, but we managed to get that Judges' Honourable Mention. Yeahh... It turned out that our team timing results was not that shabby either. Clenched 137th place out of 206 teams with net time 1:43:40 and average team pace 6:35 min/km. 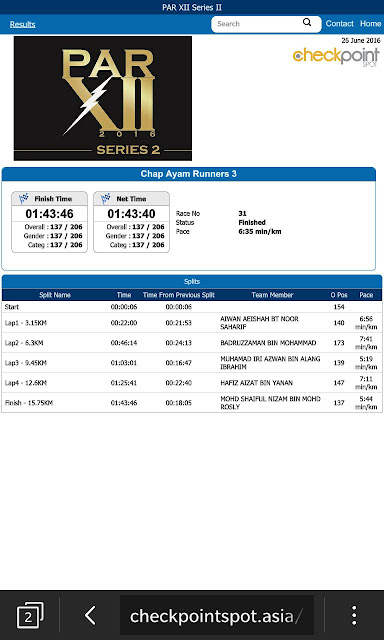 All in all, it was a great run. Most of the route was hilly with a lovely stairs to add on to the challenges. Plenty of marshalls with sufficient signage markers along the route. Nice clear sunny weather that morning. Cool finisher medal to combine with the previous 1st Series. Could not get any better than this. 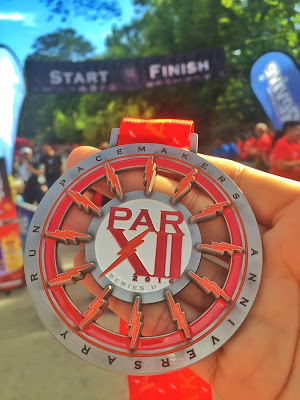 Till then, toodles! Just could not hardly wait to join PAR XIII next year... I heard the theme will be STAR WARS oriented... Episode I & II... Stay tuned for the further updates... Yayyy!