10th HATYAI INTERNATIONAL MARATHON 2016 - What A Blast For The 4th Time In A Row! 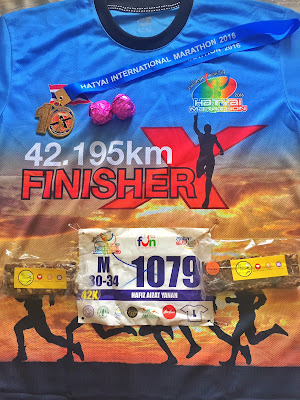 Sawaddee kap! I'm back in The Land Of Smiles! Hatyai International Marathon 2016 was the most anticipated marathon every year for me. You want to know why?

It's because of the wonderful glorious Thai cuisine... Hahaa! Makanthon is No.1 priority, Full Marathon came 2nd lorr hehee... No kidding one...

Occay2... To tell you the truth... I went for Hatyai International Marathon because of its 10th Anniversary... I'm pretty sure the running tee, finisher tee and medal would be more awesome than previous years... It turned out that I was right! Hatyai never fail to disappoint us runners year after year... 😍👍👍👍 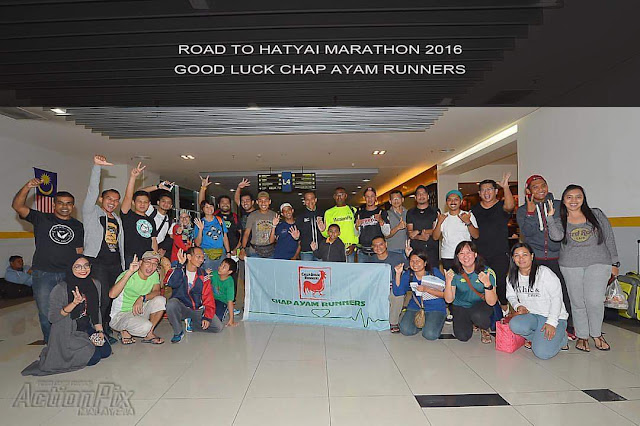 At first we were agreed to go to Hatyai by taking the midnight train but however the timing was a bit off and it was way more expensive. So we decided to take a bus. Luckily Azrie & Lily arranged all the transportation matter. So we went to Hatyai with all Chap Ayam Runners on Friday night.
I slept soundly in the bus although it was quite cold. Lucky that I came well prepared and brought along my trusted kain pelikat & little blue stinky pillow huhu...
After two short stops we arrived at Malaysia Thailand immigration border around 7am. The queue was still not that long and we were back on our bus to Hatyai in no time. Dozed off again until we reached the town around 9am. 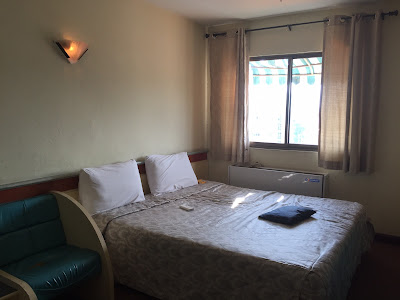 My group went to the hotel first to check in & put our things before went for our breakfast. I chose Cholatarn Hotel for this trip because of its good review.
Went to Hameed for the breakfast and chillaxed there while waiting to collect our racekit in Jiranakorn Stadium by 11.30 am. I just had chicken martabak & thai green iced tea. Yumm! Thanks Nast for the treat bro! After that we took a tuktuk and went straight to the Jiranakorn Stadium. Meriah abess tuktuk sepenuh alam nih hohohi!
I just can't wait to go to the stadium. Once we were there, the race collection was smooth like a breeze. Not so many runners around during that time. The crowd was still bearable lah hehee.... 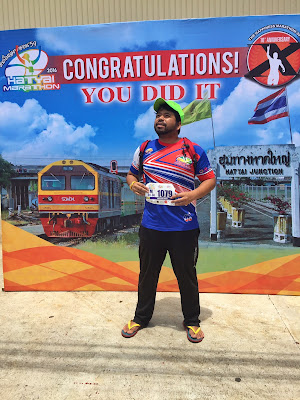 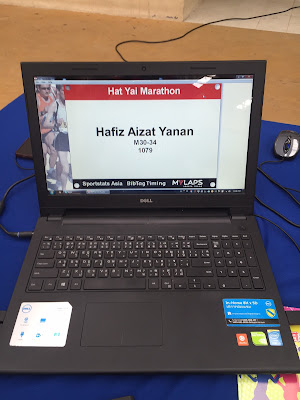 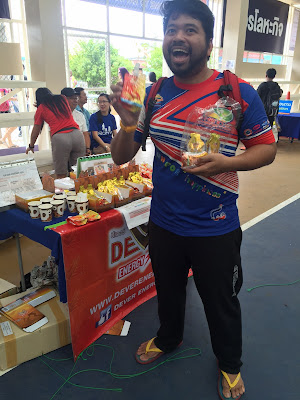 Bought some energy gels and went around the sports stalls. Look see look see if there's any fancy tee or shorts or even dri fit boxer brief at a cheap price. Bought a pair of arm sleeves & Under Armour boxer there. Cheap cheap one... Me likey!
Bumped into Sandra at the sports market and delivered her Marathon Baker homemade energy bars. Around 2pm we went back to put our stuffs and walked to Kaitod Daycha Seafood Restaurant for our awaited lunch. It was raining cats & dogs when we got there. But it was worth running through the rain for. We ordered a lot for lunch there that we have to tapau the yummy fried chicken! So freaking full weh... The restaurant owner was so friendly too! 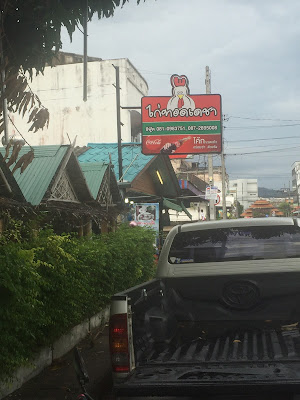 Went back to the hotel and I just rest my feet with my roomate, Nast. Somehow I was super tired + sleepy + full that I dozed off immediately! Slept like a log. Woke up around 9pm and I forgot to deliver Marathon Baker energy bars to my running friend Kordi. Yikes! Contacted him and went down to the lobby to hand in the package... Thank you guys for your support! 😍

D day has come! Woke up around 2am, preparing myself up and by 2.30am, we went down to join the rest of the group and took a tuktuk to the event venue.
Saw many familiar faces at the stadium. Bag deposit flow was smooth & quick too. Went to the loo first before join the crowd for photo session.

At 3.30am, we were being flagged off with a not so loud bang! It was a chilly morning, unlike previous years. That's a good sign. I had the feeling that it was going to be an awesome run.

First 5km felt so lazy to run. Plus my tummy rumbled again. So I was looking for a decent place for no. 2 business. Luckily I saw there was a Shell gas station not far. Fuhhh so relieved! All I had to do now was to run as fast as I can to keep up with the last runner. The ambulance was there tailing the last runner. Felt like a sweeper van or something.
Managed to tag along the last male runner and distanced myself from him. Being followed by an ambulance could feel very stressful. Their blinding red & blue lights did not helping either. Hahaa...

As we entered the highway, I lost sight of the ambulance but I still saw the glimpse of its blinking lights from far. Fuhhh, still not in the mood to run actually. Felt liveless but somehow I fought the feeling back. Looks like running on a flat route could be pretty dull and boring to death. Hahaa
It all changed when I started to see some familiar faces running back from the u-turn point.  It was around KM16/18 that boosted my running mood. We exchanged high fives and encouragement as we passed each others. I just did not want to be last finisher again this year.


After KM21 done under 3h15min, I was quite confident to finish this under 7h. Met so many running friends along the route. I was still tagging along Pali and his friend ever since KM 18. They were like my "accidental pacers".
Once I reached the u-turn point at KM25, it was still a cloudy morning. The sun was still shy to shine bright and kept hidden among the thick clouds. Well that's what I love!
The weather remained overcast and windy once in a while through out the morning. Even when I had to run along the shadeless highway route, it was still not that hot, unlike in the last few years. Very bearable. I felt so lucky and blessed. 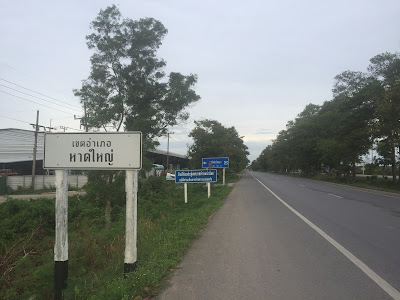 However, cramps attack started to threaten me after the u-turn. I kept on drinking my ORS filled water and had my Runbananaz Marathon Baker energy bite to keep the cramp at bay.

I stopped at the WS looking for ice to cool down my hamstrings and calves. There were plenty of cold drinks, especially that icy cold sweet syrup drink even for slow runners like me.
Once I approached the final 5km it felt like forever! Knowing that it was an over distance fullmarathon, I had to keep on moving to achieve my timing. I kept on running during the final 2km stretch to finish my 29th FM under 6h53min! Yayyy... Yatta!

P/S: A special shout-out to my roomate Nast Run for his FMV journey here in Hatyai... Congrats bro for finishing your run bro! Bravo2... You are now officially a Marathoner! Woot2...

After the run, it was a quick group photo session with my running group friends and off we went back to the hotel to relax and ate our brunch/lunch hohohi.... I had that lovely yummy Nasi Ayam Thai in my after race pack. 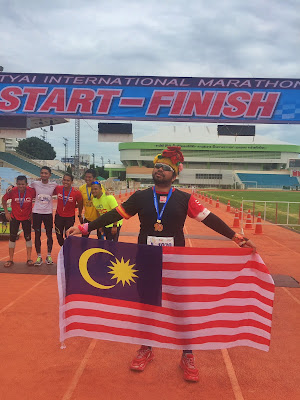 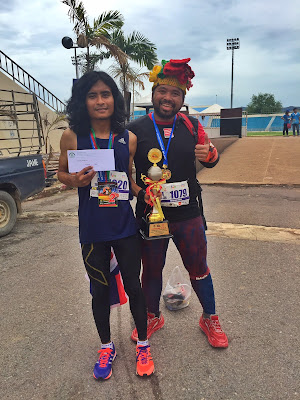 Later on we went to the same restaurant for a celebratory lunch. Now we could order super spicy dishes hohohi.... I had the famous bubbly teh tarik along with simple Thai cuisine for lunch.

After having a relaxing foot massage, thanks to Tokdad Romzie for the treat, we went for a sightseeing @ makan-makan at the Klonghae Floating Market. Considered it as the recovery walk lah hahaa... Still walking like a crab after the bad chafing at the strategic parts LOL! My bad hahaa... 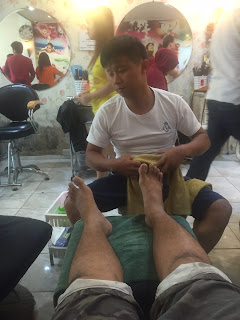 Overall it was a great event.... We were very lucky to run in such an awesome weather this year... Lovely finisher medal and tee design... Plenty of isotonic drinks and drinking water along the route, good traffic control.... Good improvement by providing a portable toilet for the runners this year... So looking forward to come back here again in 2017... For now, 29th Full Marathon - done and dusted! =D
Toodles folks!
Posted by eezard_vazz at 1:00 AM