It all started when Sal invited yours truly, Apeng, Tokdad Romzi and Lisa to make a team of five once Pacemakers announced the date for Pacemakers Anniversary Relay Run (PAR XII) 2016 - First series. We had to register asap because of the limited slots and its selling out fast too!

The rule was simple. Runners must assemble a group consists of 5 team members. Every team member must run 1 loop (3.15KM) relay and carry the baton with timing chip on it. The winning teams (Top 15) will be determined from the accumulated time. There's also prizes for Top 3 best dressed Team. :)

We chose No CrankyCranky Team as our team name because we wanted to enjoy the relay run cranky free hohohi... Plus we had to run in the morning during the holy month Ramadhan. Just run my heart out then hahaa...

A few weeks before the event, Sal went to collect the racekits for all of us at ULTRON NU Sentral KL. Thank you so much babe! We also decided to pick Purple for our official team colour. Yayyy.. That's my favourite colour... Purplelicious then! 😍👍👍👍

On that Sunday morning, I woke up a bit late for a proper Sahoor. Just had some juicy sweet dates and drink lots of water along with alpha mprolabs capsule. I just knew it's going to be a tough run. Running on empty la katakan... Just go with the flow then hoho...

After Fajr prayer, Rashid and I went to Lake Garden. I had to park near the National Memorial and slow jogged all the way to the venue. Consider it as a warming up run lah...

I chose to wear purple Pink Ultra finisher tee and MisFydKrafts purple bling-bling Magneto cape to match with our Team colour theme. Met with the rest of my team members 15 minutes before the flag off time. Oh I was being given the mandate as the last runner for my team. Gosh, that was the most stressful position for every team, the first and the last runners. Hehee... After we took our group photo, Sal went into the gantry first. She was the first runner for No CrankyCranky Team.

The women runners were being flagged off at 7.30 am sharp! While waiting for Sal to arrive, we took some photos together and started to warming up a bit.

Once I saw Sal was about to reach the transition area, Tokdad Romzi was already there to receive the baton. He ran his loop quite fast, 17min 06sec. The fastest timing among us. Awesome!
After that it was Apeng's turn to run the relay as the third runner. She ran barefoot and was fast too... Damn! Truly inspiring...
Once Lisa received the baton from Apeng, I knew my time will come pretty soon. Luckily I managed went to the loo for my no. 2 nature call. Fuhhh lega hehee... No more tummy issues hehee..

It was a cloudy morning, with chances of heavy rain too, based on the really dark clouds from that early morning. I need to outrun myself so that I won't be running in the rain & got myself drenched. Well that's a good motivation, so to speak.

I could already see Lisa approaching me in the transition zone. My heart was beating fast while I was waiting for her. Goshh... Once she handed the baton, I just sprint like crazy... LOL! Full of adrenaline rush... Plus with lots of photographers were standing nearby to capture the moments. Must go all out to look good in photos. LOL! =D 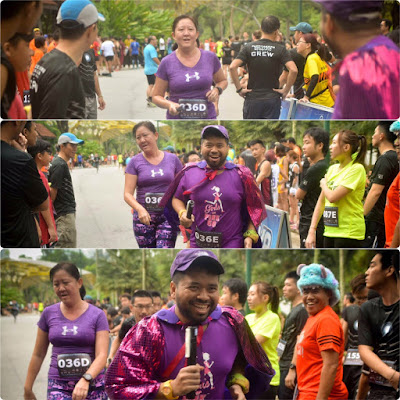 Well it did not last that long though hehee... About 500m or so, I slowed down my pace while catching up my breath. My throat felt so dry, I could only swallow my own saliva hahaa... Gulped! I tried to maintain my easy pace and kept on moving. The cape was a bit uncomfy to run with. Not with this pace hehee...


I love running downhill part. That's where I should be able to increase my pace and get ready to sprint once I reached the corner. As I could see the FL, I gathered all the remaining strength I had and sprinted like there's no tomorrow. All the runners & my friends were cheering for me on both sides. It was a mad dash towards the FL. I could already see the stars & moon once I crossed the FL. Too tired to go and handover the baton to collect our finisher medals, so I gave it to Lisa & Apeng. I clocked it 24:43 for the final lap. Way better than my earlier target 28min hoho... 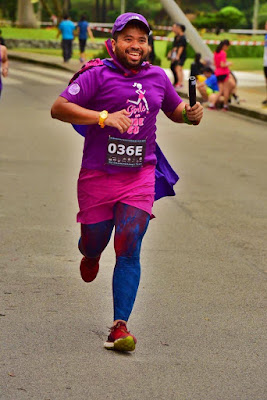 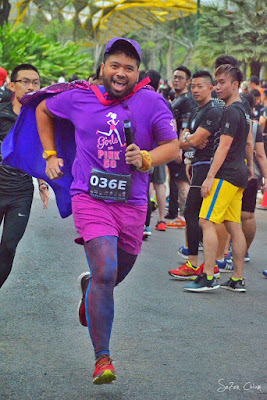 Took a group photo at the field and right after we went back to cheer for the remaining runners at the venue, it was started to rain cats and dogs. Some of the runners were still running despite the torrential rain.
We took shelter at the hut nearby. I had to lay on the wooden floor as I was still pretty much fatigue and still not recovering well.. The cold weather made me feel hungrier hahaa... Luckily it was Ramadhan and I had already tapau-ed some nasi lemak and bread.
The rest of my team headed home while I waited for the prize giving ceremony. Soon after that, the rain subsided and it was time for crowning the Top 15 Teams & Top 3 Best Dressed Teams. Congrats to all winners!


All in all it was a very well organized annual event. Great event tee by ULTRON  as the #OfficialApparel #MicroDry, awesome finisher medal design too. You have to run both series to complete the Ironman inspired finisher medals. How cool is that. Plenty of banana, nasi lemak, bread, Revive isotonic drinks and drinking water for a great after race hospitality.

Once the result were already out in the evening, placed at 130 out of 199 teams. It turned out that we did great, despite that there were 4 of us were fasting on that event day. Yayyy.. Fasting was not a hindrance for us to stay active and running on the broad morning light. hehee...Congrats to my No CrankyCranky Team for a great teamwork! Thanks once again to Tokdad Romzi for pacing me and Apeng. I had such a great time running here for the third year in a row.... It's like my annual Ramadhan event already... =) 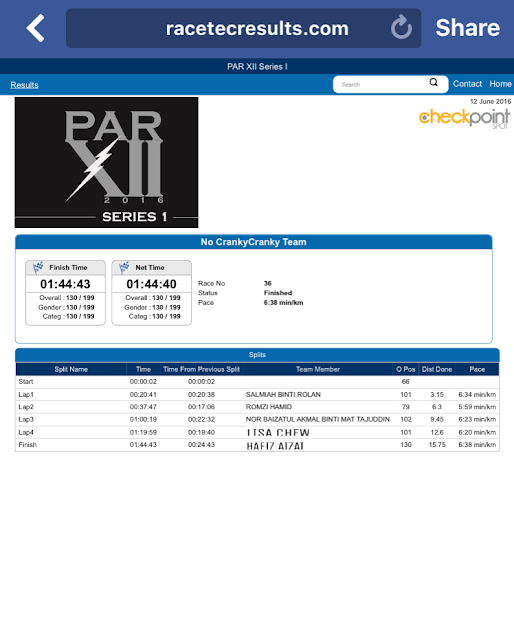 Till then, take care and thanks for reading guys & girls, ladies and gentlemen.... =D