Helo there fellow readers.... So sorry for keeping you waiting for my backlogged entries, lots of them actually. I will try to publish them one by one and tried to stick to K-I-S-S (Keep It Simple la Stupid hoho!) concept. This super late entries was due to super laziness, the lack of mood to write and share although I really love to comment on other's blogs asap. Hahaa... How irony of silly me... I really deserved more *Piakkk7x at the back from you guys, ya... Forgive me then...

Men's Healh & Shape Night Run (7 September 2013)
Enough with the introduction, let's go straight to the point ya... The normal suspects, me, Rashid and Fadzil T, went to the Men's Health & Shape Night Run venue in Palace of Justice just in time. For your information, this was second attempt in securing the Top 1000 limited medals after not being able to grab those limited Top 500 medals last year which happened to be on my 30th Birthday by that time. It was drizzling wet all the way but I hope it will stop from raining by the time we were being flagged off. It did, temporarily. Nearing the gun off time, I was rushing to get Rashid's SPI belt from Aafong. And I could not place myself as near as I could at that time. Not being kiasu much and I really paid the price from not doing so on that night. Hahaa... *dush2 me...
Oh well, as soon as I reached the finishing line in 1:24:52, it was very hectic and havoc. We were requested to line up to take the number for the limited finisher medals. Unfortunately I was 16 seconds late from the last person who received the limited medal. Oh well, better luck next time. Not having the limited medal for the second time was already sucks, unlike my other running buddies. I had to blame myself for neglecting the speed training several weeks before the running event. Plus, I`m not super kiasu enough to place myself among the front line. So now all I need to do is to take the bitter humble pill and move on as I really need to get a decent sleep before the next running event which will be helf on the very next day. *Sigh....  (Nanges2.. Dah lah kaki sore segala, pace sendu tetap hajat tidak kesampaian... Apakan daya, takdir menentukan segalanya...) =P 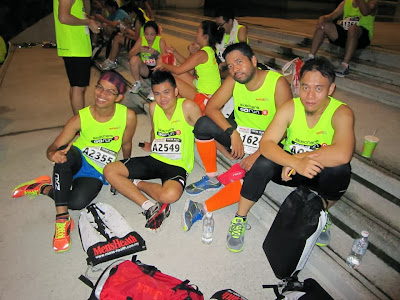 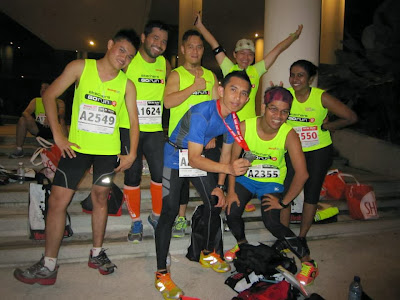 Pacesetter's Back 2 Basics Run (8 September 2013)
I woke up lazily on that wonderful chilly Sunday morning after the exhausting tormenting night run and hurriedly prepping up myself for the event. Although I was still feeling traumatised and demotivated after I failed to secure the limited medal, but I managed to stay calm and positive about my unfortunate incidents. Maybe it was not my time yet to shine. Hahaa... Dramatic much! Luckily it was held near at the heart of my office compound, MAEPS Serdang, Selangor. Managed to snap several photos with my usual partner in crime, Rashid, hunkilicious Ridwan and super determined Gme Azmi before we were being honked off. I treated it just like my normal weekend's LSD run, except it was a wee bit faster.

We were running on a 7km loop along the wonderful breathtaking scenery along MAEPS Serdang. It was supposed to be a 10km loop distance but I heard that the authority did not approve the additional 3 km route on the 11th hour. There were some photographers seemed to be taking the runners' pictures along the route. That's really helpful considering that us runners tend to run a lot more when they were in sight. Hahaa... Motivating much! Must look good in camera by the way. There were two Water Stations along the route. After the first loop, I heard the sound of the usual brass band performed while the runners were running. Hmm that's unique! I immediately snatch some heavenly slices of watermelon after the first round. And I was ready to go for the second loop. 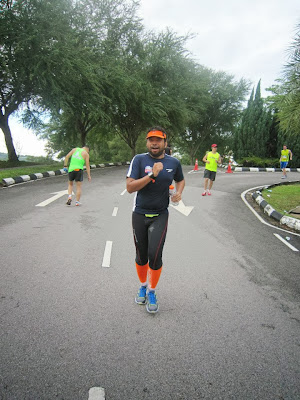 I've decided to add some elements of fun and leisure during the second round. I changed my running tee and cap into a different colour. So did Rashid and Azmi too. Hahaa... It felt so good to run in a group, eventhough I know my pace was way slower than them. Hehee... After I completed my third loop, it was time to call it a day. There's no point of doing the fourth loop because you will be 2km short by the way to make it 30km. Blame it on my lazy bump for not doing the final loop hahaa... 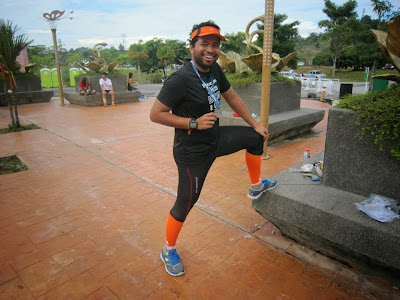 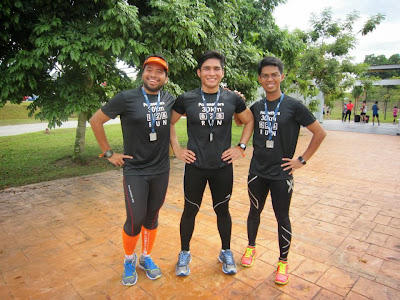 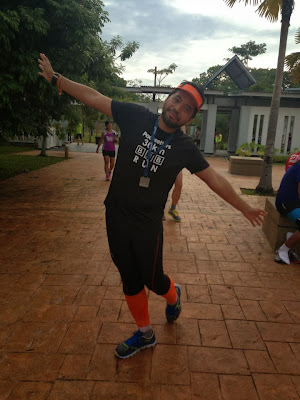 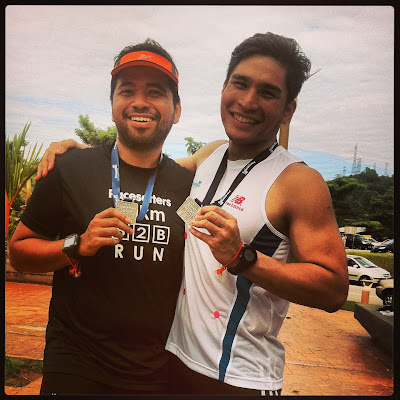 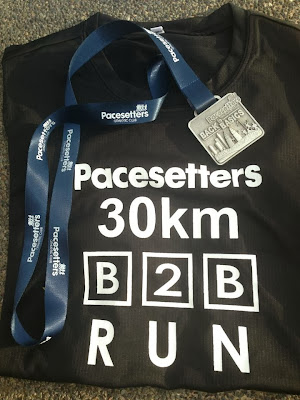 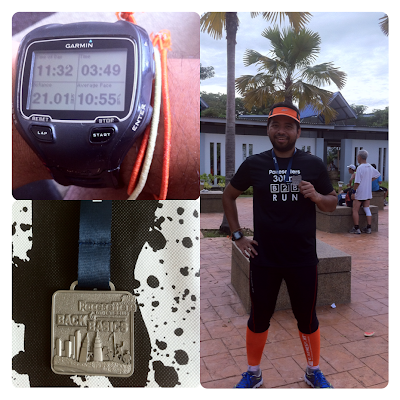 After that it was time to indulge the yummy nasi lemak and juicy water melons and limau kucing. I enjoyed meeting the usual suspects and we took lots of pictures together. Definintely a FUN running event. It was well organized, lots of marshals at WS and at the main junctions, the food was good although it was a small scale event only. However the running bib was so dodgy, it crumbled after my second loop and had to keep to redeem my finisher medal and tee. The design was awesome! It's a must join event for next year then for me! =D