Hi there guys and gurls, fellow brothers and sisters in runninghood, even to all non-runners readers too. Happy Tuesday guys! Let's cut the chase, shall we? Okay, I know this entry was so backdated already. But somehow I need to publish this one. Why? Because this is the only running event that I've started super late, like almost 1 hour late, I tell you! So bear with me as I`ll spill all the juicy details later on.

It was all started just fine. Me and Rashid were contemplated to sign in for this event. Why? It's logical. It was held on Sunday, 22 September 2013, 1 week before the postponed Standard Chartered KL Marathon and we could not afford to injured ourselves during the event. Very very risky. Some how in the end, we managed to sign in on the 11th hour after seeing the attractive finisher medal and not so vibrant finisher tee. Hahaa... If we could survived the 20 horrendous grueling man made obstacles during the Viper Challenge, how hard could it be to endure 9 obstacles on a 18.95km distance event? We shall find out soon. Hehee. I received my racekit via courier, two weeks before, I guessed. But things happened for a cause. I simply couldn't sleep early the night before the race. I slept around 2.30 am!!! Disaster in the making, most definitely... @.@

O-M-G! As expected, I woke up around 6.30-ish, I hurriedly got all the important stuffs ready and off I go to Palace of Justice. I was driving frantically like a F1 driver, Fernando Alonso, perhaps? Did Not Start (DNS) is not an option by that time. There's no way I could let that precious finisher medal and fabulous tee slipped away from my hands. Once I arrived at the starting line, I could see there were 1 lady runner started out super late too and I tried to over take her along the route. I did not have time to do the warm up and I just dashed to catch up with her.  It was already bright and I was running without the safety cones anymore because they might have cleared things up already.

After the first WS, I was not that far from her. She was running quite fast too. She was wearing a Vibram. But somehow I had to decrease my pace fearing that a cramp might be creeping up on me anytime soon. At that point, I already reached KM4, where I could see some fast runners were already making their way back to the finishing line already. I still remembered that Rashid seemed puzzled when he saw me running followed by a safety motorcyclist. I knew I was the last runner by that time. Hahaa! I saw M.Ridwan and Nick running towards me then.

Thank goodness as I tackled the incline at Putrajaya International Convention Centre, I was no longer the last person as I managed to run a bit faster than the lady runner. Fuhhh... It was quite a pressure to keep up with my own pace and at the same time being escorted by a motorcycle. Blame it on me, as usual... Hehee...

I reached the first obstacle, which is the sandbag challenge. Managed to carry the heavy 15kg rice sack on my shoulder for 80 metres. Fuhh thank goodness haha! Next it was the most daunting challenge, the monkey bar one. I attempted once and I slipped. Therefore I just did the 10 burpees as the penalty. Dang, doing a set burpees was definitely tough, especially after running 5- 6 km! Later on it was the third obstacle, the barricade. I did not dare to leap like a pro athlete. So I just crossed it carefully. Could not afford to fell and injured my precious foot, remember? Hehee...

After 400m run I met again with the same anthills just like in Deuter Trail Run. I swore that I could already see some stars after the last anthill(fourth obstacle). My heart was screaming for mercy! To add more salts to the wound, I had to tackle the nasty steep climb immediately. I was forced to speed walk for 200m before I could run a little bit more (fifth obstacle). Then I could see the familiar Deuter trail as my sixth obstacle. It was fun and exhilarating running downhills but with care too. At the end of the trail run, I had to cross the ocean of tyres in order to get to the other side. That was my seventh obstacle so far. I took my sweet time to overcome this as I did not want to trip myself up. I even witnessed one of the runner's shoe left in the tyre.

Later on, after 400m run I reached the eighth obstacle, which is the high wall challenge. I failed at my first attempt and luckily there was this one kind hearted marshal who lend his shoulder for me to step on for the leverage. Blessed you, Sir. Even the Orange Man helped me a bit at the other side of the wall. Thank you too, Sir! Looks like my upper body still sucks and not that strong to support my heavy body. Urghhh! I nearly had a hamstring cramp when I was on top of the wall.

Finally it was over. I had to keep on running after going through all those challenges. By that time it was getting hot and the sun was shining bright in the sky. Running in that kind of condition alone was quite tough, just so you know. Reaching the final 400m, I could see the last surprise obstacle. It was two Ford pajero being parked back to back. I had to climb over the pajeros carefully and made my way to the finishing line under 2:36:22 according to my Garmin time (3:21:16 nett time). 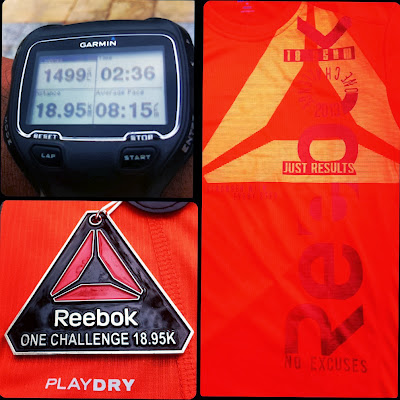 I was freaking tired that I did not had the appetite to savour the scrumptious buffet spread afterwards. At first I thought it was meant to cater for the VVIPs only because it looked quite posh. The heat was unbearable too. After all the post-race photo session with all my running friends, then I managed to swallow some of the food. The briyani rice was delicious! Yummeh... 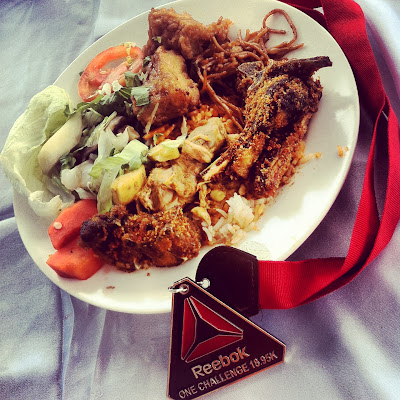 Thanks to all my running buddies of We Are Runners for being patiently waiting for me, the super EPIC late runner. Almost 1 hour and 10minutes ya. I`m so touched! Muaks guys n gurls!!! =D 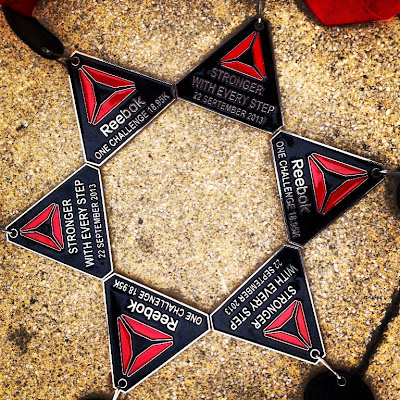 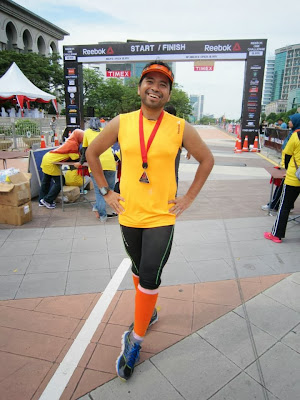 Cheeky me!
Overall, it was a very well organized events, especially for an inaugural event. WS were aplenty too, serving icy cold drinks and isotonics too. Medical team were always on the go. Love the reversed route, instead of POJ - PICC usual route. They even provided us the wet sponges to cool off the heat. Well done to all the volunteers, marshalls and organizer for the smooth sailing event. Thank you to the motorcycle marshal guy for escorting me for about 2km. Safety first as always. We shall see if there will be another Reebok One Challenge next year, perhaps?

Till then, adios amigos!

P/S: NEXT: The most anticipated full marathon event of the year in Malaysia. My 6th FM by that time.. =D