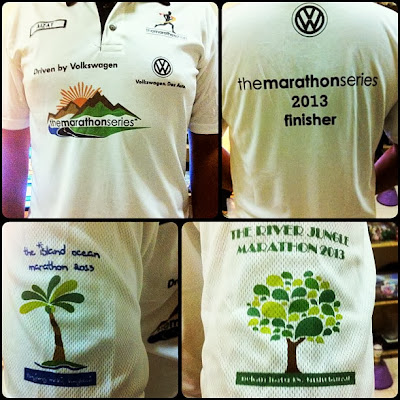 Hola there to all my humble distinguished followers and readers, brothers and sisters in Runningdom. Happy Tuesday to all! Once again, I've been longing to write an entry about this not so recent  River Jungle Marathon 2013 aka RJM. Sounds like a Military-ish @ Rejimen Marathon, don't you think? Hehee... But unfortunately, the laziness in me really got to me this time around. Well, better late than never, right? So much with all the excuses... Hahaha! By the way, just a little bit about this RJM. It was the Part 2 of The Marathon Series Combo for 2013. The first part was The Island Ocean Marathon (IOM) which was being held in Langkawi on 21 April 2013. You can read my IOM race review  HERE. As a boutique marathon, all the runners aka clients were treated and pampered like a VVIP and there's NO cutoff point at all. Believe me, it was really worth the money spent for the registration fees and such!

A day prior to the running event, Rashid and I joined this laidback breakfast run, organized by Le Sabuns Ultra. It was held in the luscious greenery of Taman Saujana Hijau, Precint 11, Putrajaya. All the participants were encouraged to run/jog/walk at least one loop of the park before we can enjoy the delicious piping hot nasi lemak with all the sinfully yummy condiments like beef rendang, sambal sotong and sunny side egg. Both of us ate one each and tapau home one, since there's plenty of extra nasi lemak left. Boy I tell you, I had a love at the first sight with this magnificent park. I was thinking of doing my LSD run here soon. The route was awesome, especially the rolling hills and wonderful landscape. It really got me so excited to run along the route and took some beautiful pictures along. I highly recommend to all the runners out there to visit Saujana Hijau Park, at least once! 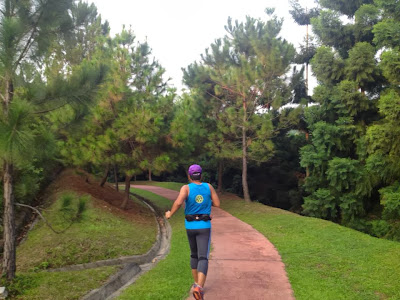 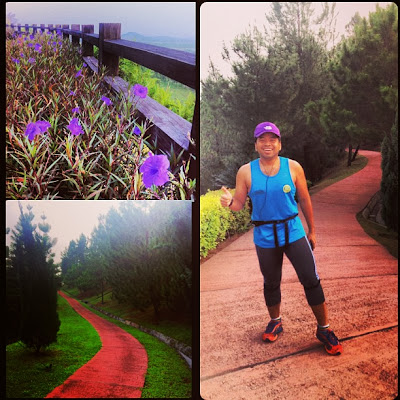 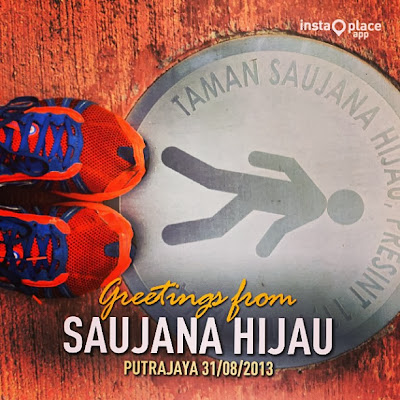 Fast forward to the morning of the racing day. We was quite late that morning and I had to rushed to Batu 18 Hulu Langat. Luckily the traffic was clear since it was still 4-5 am in the morning. Managed to park adjacent to the starting point and joined the Le Sabuns Ultra team for a photo ops before we were released on 5.30 am sharp. Once again, we were flagged off with a brief fireworks display. Super nice! And off we go!

The First 10KM (Running in the dark, love the sweet smell of jackfruits!)

We were running along the narrow road towards the rustic part of Batu 18 Villages in the darkness. Since I forgot to bring my Energizer headlamp (thanks to the kalutness of me... sigh!), I had to follow those runners with the bright headlamps. We were greeted with a wonderful smells from the ripe jackfruits and durians along the route. I barely felt the incline at this point because it was still dawn. Had my natural toilet break somewhere around KM6 since I didn't get to go to the toilet before the flagoff. I took my 1st energy gel circa KM8-9 and realised that I've dropped one of my energy gel along the way. Dang! But it's ok, remain calm and positive. =D

The Second 10KM (Running through the misty incline, it's priceless!)

As I progressed well towards the second part of the marathon, suddenly I felt this sharp pain more like a cramp on my mid foot. I never had this such excruciating pain before. Had to blame it on the lack of warming up before the event. At first I was scared that it might be PF as I felt so painful to run and tried to slow down my snail pace. Luckily the pain went away after I started to run on the incline circa 11 km onwards. I started to keep on running up up and up all the way. Met Abg Zaini (Kak Lina's hubby) on my way up. He's running and walking fast too. Not that steep though and it was totally doable. I could see some fast runners were already making their way down the winding road, including Rashid and K.Romz.

The weather was still overcast, cooling with all the mists around us. I love loops not because I am a speedy runner but I love to get encouragement andsome high fives from them as the loop was getting more mental. It felt like forever for me to reach the 16km U-turn. Now it's getting much much more easier to run down the decline. Just let the gravity do it thing. The view was getting more awesome as if I was running through the clouds. Just like a fairytale... Had my second outdoor toilet break circa KM18 before I took down my 2nd energy gel and endurolyte pill. 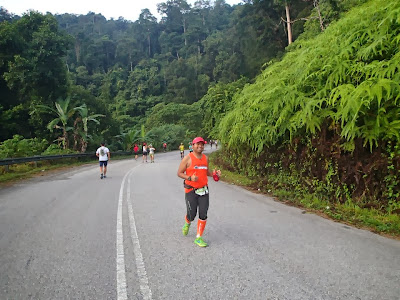 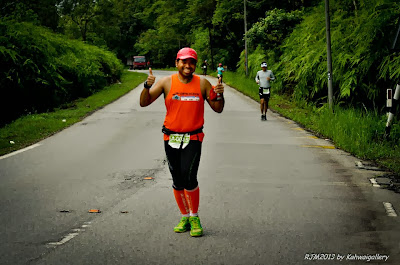 The Third 10KM (Running through a "Pasar Tani", surprsingly! LOL)

Before I tackled the second incline, I stopped by the medical aid station and requested for a muscle spray for my knees and hamstring as I could feel the stiffness of the muscles already. I felt like to open up my shoes and spray my midfoot too but it;s too tedious and time consuming. So I soldiered on. Met with Deo on my way up the second incline. Oh my goodness, he was super fast. Even faster than Rashid, LOL! Truly inspiring indeed. I was shocked upon seeing a mini Fruits Stalls out of nowhere as I reached KM23! Didn't get to taste the tempting durian as it was almost finished when I reached. However I gobbled up some super juicy mangosteens, rambutans and mata kucing (longan). I was stoked with the juiciness of the longans that I decided to bring some with me for my marathon journey.

The view along the route towards the 26.5KM was totally breathtaking. I could see the magnificent Semenyih Dam with the mountains in the background. I was given a humongous banana at the WS at the 26.5KM u-turn loop and there were lots of monkey were hanging around waiting for the free bananas. Let's go bananas guys! I caught up with Kak Gai after the banana stall. Wow, she's a tigress and so fast too! Met with Abg Zaini too along this route. He was doing super fine at that moment. Did not look tired at all. Dah macam main kejar-kejar lak. LOL! Around 28km, the runners were served with a icy cold sweet Pandan Coconut drinks! I even gulped down two of those, guilt free! Really need all the natural electrolytes by the way. 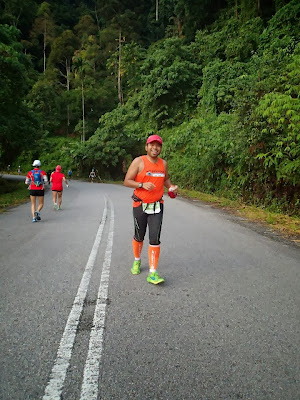 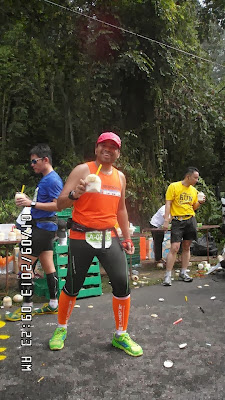 The Final 12.195KM (Running in a toaster/griller condition, Super EPIC!)

As I reached the 31KM mark, it was getting hotter and hotter. I was running out of water at some point and suddenly I felt hungry, seriously. Especially after I passed a wedding reception that was being prepared by the roadside. Hehee... I tried to run under any shades available and tried to soldier on nevertheless. Luckily I remebered that I still had some of the juicy longans that I took for the second time after I had my coocoonut drinks. Totally irresistable and felt like sent from heaven! I was running out of endurolyte too.

I've decided to gulp down my last energy gel after 35-36 KM mark. The traffic was buiding up and we had to run in a single line for our own safety. At this point I was still running aka shuffling along side Abg Zaini. He's a power walker I tell you. Given an adequate amount of training, I'll be eating his dusts all the way. LOL! I was truly amazed  and touched by his perseverence and tenacity to finish his Full Marathon Virgin @ RJM on behalf of his beloved wifey. More over, it was their Anniversary and Birthdays month after all. Running for a good noble cause. So sweet of him! The last 2.195KM felt like forever I tell you... Thank goodness, I crossed the finishing arch in 6.00.18 (unofficial time). 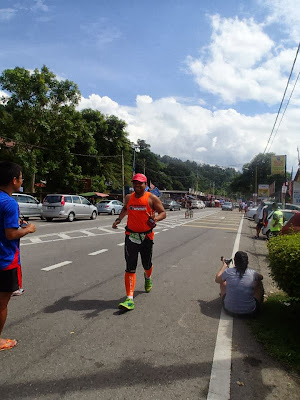 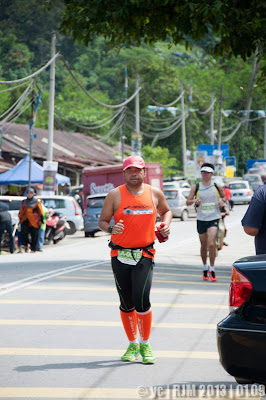 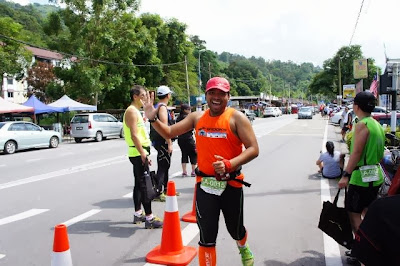 Later on, I headed to get my precious finisher medal, certificate and two finisher tees and finisher combo tee. Not bad, huh? I went straight away to take the nasi lemak and fried bihun and gobbled up uncountable slices of watermelons. The heat really took a toll on me. Started to felt the dehydration symptoms. Luckily there's plenty of other refreshments being provided by the ever supportive Kak Lina. The Coke and grapes had never tasted any better at that time.

Took some pictures with the rest of Le Sabuns Ultra contingent after the run is a must. Met with Madam Sabuns and KraziRunners Sistahs too. Congrats to Sis Gai for her Maiden Full Marathon. She finished strong, earlier than me, most importantly. Looks like she has unleashed her inner tigress eh!  =D

Honestly, I felt so blessed running this RJM. Not only I found so many pictures of me being taken by other running buddies and event photographers, but the strong feeling of camaraderie between us runners along the way. It really lifted my spirits from the beginning towards the end. I will definitely want to repeat this route again next year. Soooo awesome! It makes me smiling wide by looking at all the pictures. =D

For my Garmin data, please refer HERE ya!

Next: The forever daunting back to back events of Men's Health Night Run & Back 2 Basics LSD Run Report... Basi dah weh! @.@
Posted by eezard_vazz at 5:36 PM