Happy Wednesday folks, my distinguished brothers and sisters of runninghood. I would love to share with you on my not so recent 6th Full Marathon, or shall I say Fun Marathon this time around? I intended to run fancy coz it was the most happening n biggest marathon in Malaysia. It was like a Mecca for us Malaysian runners, where it was a MUST join event of the year. It was my second time joining this event. Last year I did a Half Marathon category. It was a sendu run back then.

As usual I had a so-called carbo loading session on the Friday. Had a lovely pasta during my karaoke session with my ex-schoolmates. Sinfully yummy indeed. Hahaa.. Stayed up all night long after the session. Too many gossips and dirty laundries secret to be shared among 4 of us.. LOL!
Pre-Race
A day prior to the BIG day, Rashid n I joined the Le Sabuns Ultra Breakfast Run aka "The Sarong Run". It was just a morning run around KLCC Park. What's the catch? We had to run in sarong, duh! I'm confident that we were the highlight of the morning. Luckily we runners are the crazy bunch of people hahaa... 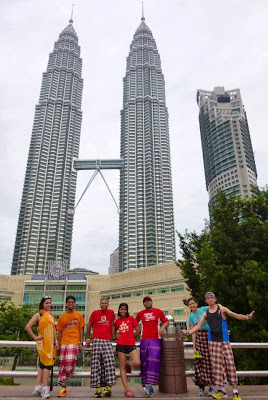 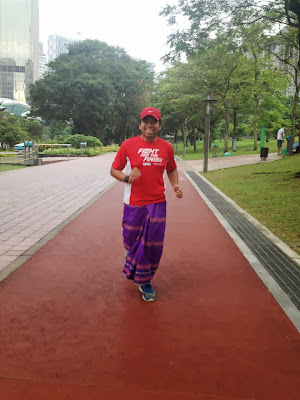 Later, I went to pick my props for the event from Mis Fid. She was Rashid's ex colleague and had her own Krafty blog. Feel free to visit her FB wall HERE if you are interested ok. You can even follow her Instagram at @misfyd too. She's an expert in doing all the delicate crochets for babies and adults. Not forgetting her famous sexy Bunny Ears and fluffy Bunny Tail too. Thanks Fid!

Then we went back to my house to rest our feet. Had my tapau-ed lunch, the leftover nasi lemak with sambal sotong and runny egg. After that I dozed off until 9pm, i think. Goshhh! Hibernated much. @..@

Race Day
Woke up lazily circa 2am after a short nap (I slept at 12.30am!). Had to wake up early coz we need to fetch Fadzil at his house first before we headed to Dataran Merdeka that morning. He'll be doing his 1st SCKLM HM. I managed to park at the parking lots before Bukit Aman by 3.30 am. Still being nervous, I wore my CompresSport calf compression, energy gels belt, SPI belt and running shoes at the parking lot.

After deposited my bag, I went to the paid toilet to force my no.2 business before the event. Don't want to waste any time doing it during the run. Hahaha... Didn't have time to warm up properly as I intended to enter the pen early, around 4.15 am, which I was really regretting very much until now. Managed to had a pre-photo session with these both running legends, Ultra Ray and Jamie. Felt blessed totally!


I maintained my pace throughout the first 10 km. Had my 1st energy gel after 8 km WS, just as I've planned before. I was running along the Sungai Besi airport stretch and heading towards Jalan Dewan Bahasa Dan Pustaka and anxiously looking for the 12 km WS for Fajr Prayer.

11 - 20 km (Time to seek divine blessing and stayed running strong)
Stopped by at 12km WS for a Fajr Prayer and my only toilet break before I continued my run. I was still within my pace band pace by that time eventhough I took a prayer and porta loo break. I had my 2nd energy gel after 16 km WS and still felt fresh. We were running along Jalan Cheras towards Jalan Peel and had my banana treat at the 1st banana station at KM 17. Took 2 pieces of it. Yum! Then I kept moving on to meet the cut off time for 20 km based on my pace band (2:36:24). Bumped into the glamorous and gorgeous as always Marathon Mom Sis Nannoor and her great hubby, Abg Ibrahim somewhere at Jalan Tun Razak heading towards Prince Court Medical Centre and Pavi. Said hi to them and kept on running. It was started to get all shine and bright after I reached Jalan Tun Razak... 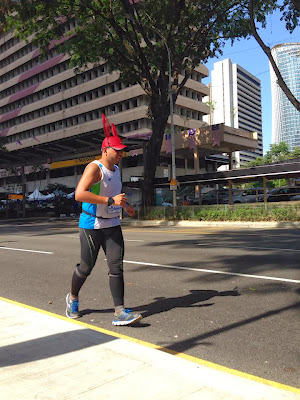 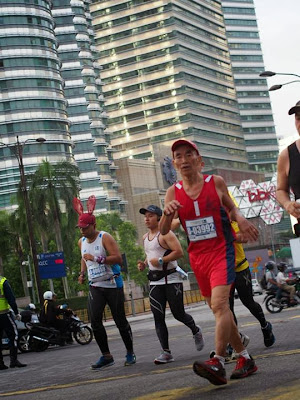 I was caught running at KLCC area and Jalan Hang Tuah, if I`m not mistaken. I didn't realised there were any photogs at that time... Gosh!

21 - 30 km (Beware! Enter the mental stretch at your own risk! )
After running towards Jalan Sentul from Jalan Tun Razak, I did not realized that I'll be heading towards the first mental stretch along Jalan Ipoh. It was getting hot and so bright by that time. Running in this kind of condition was never an easy task for me the slowpoke bunny. Need to remind myself to bring along my shades next time. Gulped down my 3rd energy gel circa 24km. I could already feel the cramp started to accumulate around my quad and hamstring but I continued on running. One of the motorcyclist honked me and gave me a thumb up for my funky head gear. It was hard to run fast with this fragile bunny ears and heavy bunny dangling bunny tails ok! Tobat xmahu lari pakai headgear berat2 dah lepas nih... T_T

31 - 40 km (Hot was just getting hotter and hotter!)
I was not done with Jalan Ipoh yet ya. It was sooo long until I ran into Jalan Kuching, where the mentally exhausting route kept on like a never ending story. Hahaa, super mental I tell ya. I stopped for a while circa KM 33 to stretch my feet  for a while and took a breather. To make it worse, it was sooo freaking hot. I never felt that extreme heat before even during my late long runs before. Totally fatal ok! Mad I tell ya, mad. I could see many of the runners were tried to run under the shades of the trees along the route. Finally the torturing heat was over when we ran into Bukit Tunku. The inclines were runnable. I would rather run on a shaded inclines than running under the bloody hot sun. Took my 4th energy gel and endurolyte pills after KM35. Stopped by at FMV' Kak June's kedai runcit and said hi to Farah Fazu. Sipped down some water and continued my run. Another pitstop was at le Sabuns Ultra's kedai runcit and had a icy cold Coke and grapes. Hahaa, thanks to Abg. Zul and Zinov, the taukehs of the day.


41- 42.195 (Almost there, almost home!)
Once I've reached the Bank Negara loop, I knew the journey was almost came to an end. I tried to quicken my pace knowing that my Sub 5:30 was far fetched. I tried to muster any last strength to endure the long stretch along Jalan TAR loop towards Pertama Complex and running towards Dataran Merdeka. At the last 400m towards the finishing line. I was startled and awed to see all the familiar friendly faces snapping my pictures. Felt like a glamorous artiste being swarmed by the paparazzis at that moment. LOL! Thanks fellas... Love your support! =D. I managed to cross the finishing line in 5:50:42:31 (nett time), 5:47 (Garmin time), within the cutoff time of 6hours. Hehee... Not that shabby though, considering the insane lethal heat. 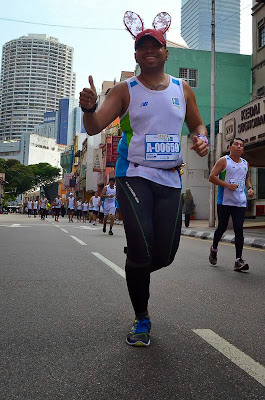 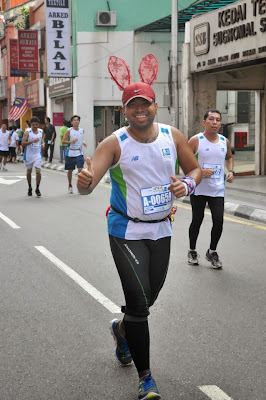 I stayed at the favourite spot after wards to keep on cheering the incoming marathoners. It was  a very nice moments at that time. Most of them looked suffered like hell due to the merciless hot weather. After that, it post-race photo-ops with the usual suspects and supporters. Chewah! 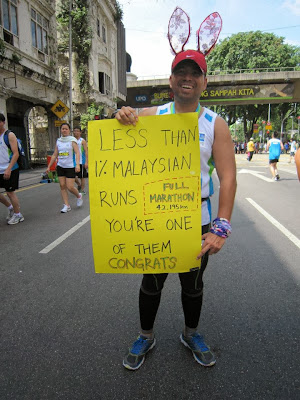 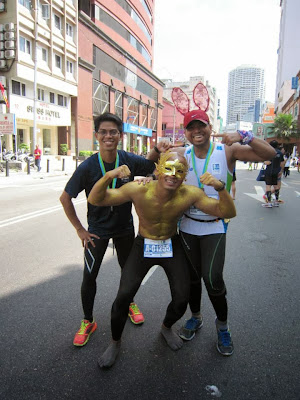 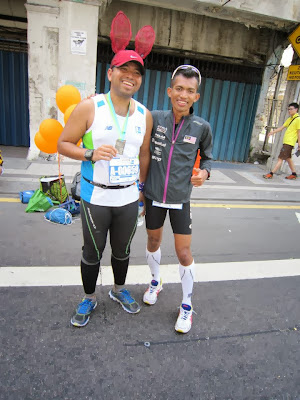 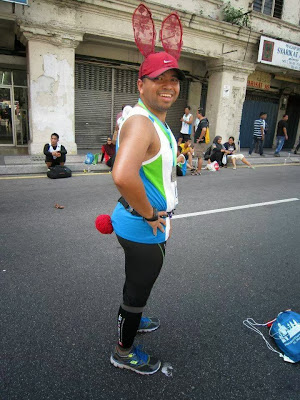 With the Sub 3 Marathoner, Edan Syah... I read his blog before... Very very inspiring ok!
All in all, it was a very well organized event. Lots of Water Stations along the way. Plenty of bananas, energy gels (twice), water and isotonic drinks. The traffic control was awesome. Many thanks to all the policemen, policewomen, DBKL personnel, road marshals, the cheerful volunteers for the smooth sailing event. They were the unsung heroes of the day. I just could not thank them enough. The only con of SCKLM was the super dogdy cheaopo finisher tee. The material and the design was super sloppy. Tangkap muat betul la, not worth for what we have paid. I personally think last year's one was way better than this year. Sooo disappointing. Buat lap lantai jelah nampaknya nanti. Nak pakai sambil brag pon rasa malu bila tengok finisher tee event lain yang jauh lebih berkualiti ok! Urghhh...

Next Entry: My 1st Ultra Loop Maiden Attempt. My mental strength was tested to the ultra MAX!
Posted by eezard_vazz at 2:06 PM