Hello there fellow followers, silent readers, dearest brother and sister, near and far... Welcome back to my humble shabby blog. As I am writing this entry on the Merdeka's Eve, I would like to share my recent 4th Fool Marathon experience with all of you out there. I labelled it Fool because I was so under training and not mentally and physically prepared for it this time around. I just don't know why. Perhaps due to the low mileage during Ramadhan and Syawal? Something wrong somewhere I bet. There were many factors actually. So please bear with me. =D

First of all, it was meant to be my 3rd Full Marathon (FM) before SCKLM. Since it has been posponed due to 13th General Election, I've decided to go for Hat Yai International Marathon in May in order to go for the Marathon Maniac (MM) title (kiasu much, yes I am... more to passion I guess... LOL) Unfortunately my MM dream shattered when they've decided to pospone SCKLM in June due to the chronic haze problem in Klang Valley. It's ok, as every cloud has a silver lining, I said to myself. My time will come sooner or later...

The week before the Borneo International Marathon 2013 (BIM), it was carboloading time. I had a spaghetti in the office, prepared by my colleague on Monday. Had a mixed bento with Rashid at Sushi King (Yes, we are Sushi King freaks, I have to admit... =P). I went to Sis Nannoor's house for Ziarah Raya with Rashid, Sis Eena Amir and Azri. We were served with fried noodles, nuggets and her signature dish, cheesy french toast ala lasagna. So filling indeed! Rasa macam nak tapau je malam tuh.. LOL! The carbo loading continued in Kota Kinabalu, Sabah. We had a scrumptious lunch in Upper Star Suria Sabah just after we collect our racekit on Saturday, 24th August. Followed by a very hearty seafood galore at Pasar Malam near the harbourview. Fuhhh, I felt like I was super stuffed and overloaded at the moment. Super delicious cheap fresh seafood, I must say... Deep fried battered calamari is my favourite dish ever! Love the curry flavour... Yummeh... Let's the makanthon begins, eh! @_@ 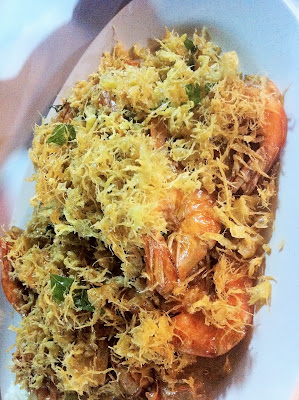 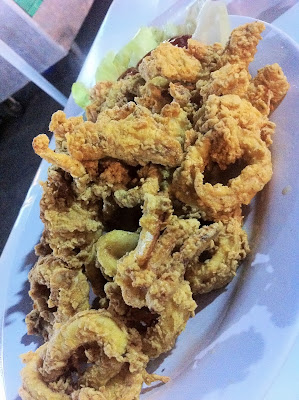 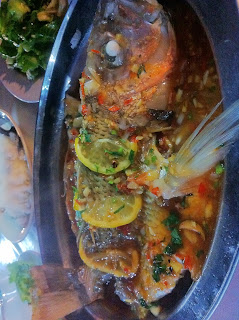 After that, I walked to my service apartment and tried my best to sleep. I was sweating when I woke up from my sleep. It was restless night for me as I managed to sleep more or less than 3hours as I had a shuttle bus to catch up by 1.45 am.
Circa 2.20 am, I reached Likas Stadium and deposited my bag and went to do my number 1 business. After having a warming up session (10minutes), we took some photos and wished each other good luck. I was thinking of doing my PB for this BIM 2013, targetted 5:30 after considering the doable flat route. Boy, my plan really backfired on me. About 2.55 am, we were flagged off. I was feeling so nervous. Tried to run my best during the first 10km but I failed miserably. Managed to do 1:14 (pace 7:28/km). I ran lifelessly from the stadium towards Kompleks Karamunsing and headed back towards the stadium. I tried to muster every strength and determination that I've got but none to avail. It felt as if as I was running my LSD pace all the way. The next 10km was a disaster as well. I screwed up my 1st hydration plan as I just had my energy gel after 12km. That's so not me... T_T 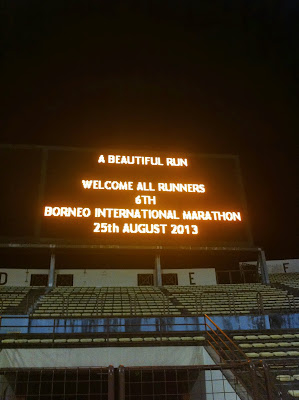 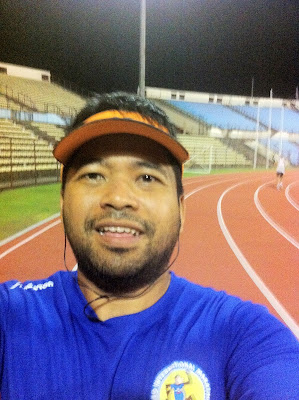 I stopped at Shell gas station for a Suboh prayer and toilet break. That costs me 10minutes or so. I didn't get my 2nd wind after that short break either. Because normally I'll feel a lot more refreshed and energized everytime I stopped by for a prayer or toilet break. That's weird... Gulped down my 2nd energy gel after 18km or so. Tried to stay as positive as possible during the hillly course in UMS. Not as steep as I've expected before. (Bukit FST UKM lebih tinggi dan mental weh!). They gave out a  banana in UMS to all the HM and FM runners. I maintained my sendu pace after I came out from UMS and running towards 1Borneo and Sulaman.
The dreaded mind boggling stretch felt like forever at that time for me. I saw several suffering faces from the famous speedy respective runners on their way back from the loop like Romzi Liu, Zamil, Aniza and Gme and his pacee, Suzana. It reminded me of the mental Jelutong Highway in PBIM. Luckily there were plenty of water stations along the route, every 3km for me to refuel and pour some water on my head. I was barely holding on to my sluggish/sloth pace of 9.30 when I saw my running blogger pal Yahya Iskandar running on the other side of the loop and encouraged me to stay focus and fighting spirits to finish the game. It was just another 500 meters from the 29km U-turn mark. I took my 3rd energy gel after 26 km, I guess. I had my 2nd banana treat at the checkpoint and was given a Powerbar too. The next 10km was my break or make point. It was getting hotter and the lesser runners within my sight. It really tested my mental strength as I was getting fatigue and started to have some mild cramps. I gulped down my last gel on 35 km mark. Thanks to the medic volunteers for their muscles spray and hot cream. The volunteers were still cheering for me as I ran passed them. That really lifted my spirits, eventhough just a little bit. I managed to overtake some of the runners as I ran passed the Tun Fuad Stephens Road. It was already 5:50 as I reached 40km mark. The last 2.195km felt like an eternity to reach. Finally I clocked 6:09 (unofficial) and 6:11:51 (official timing), still within the cutoff time of 6:30. Thank goodness! I was ranked 150 out of 196 in Men's Category and 297/353 overall. Not bad for a lemau run. Thank goodness it was not my PW run... Fuhhh =D

Was it because of the lame song selections being played on my mp3 player during the 1st 10km? Or the soothing full body massage I had a day prior to the event that made me so complacent and relaxed? Or am I being overloaded with lots of carbs, protein and fat during the carboloading session? Or was it because of lack of interval, speed and tempo training that makes me run sooo slow and sendu? Or the lack of sleep? Maybe lack of  moral boost and support from my usual fellow compatriots runners (W.A.R.s and Le Sabuns Ultra) contributes to the lifeless run. Hopefully I'll get my running mojo back during this coming River Jungle Marathon 2013 (RJM). Sounds so military-ish hehee... It's going to be my 5th FM, my inaugural back 2 back Full Marathon events this year. Ready or not here comes the Queen of Amazon Jungle... Roar! LOL!

But before that, take a look at some of my post-race photo shoot session. It's a must y'all... Mihmihmih... 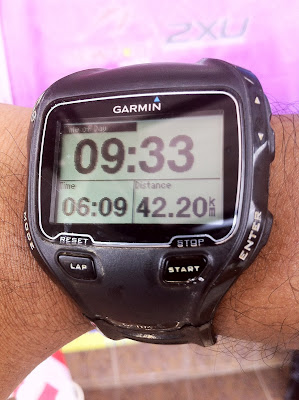