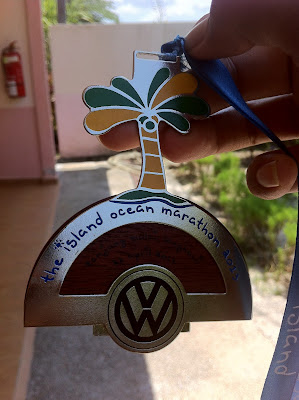 Hello there fellow readers and followers, my brothers and sisters of runninghood (if only there's such word =D). Happy lovely Thursday to all. I'm still couldn't forget my recent 2nd Full Marathon journey aka runcation aka island escapade. It was still fresh in my mind, as if it was being held yesterday. Guessed that everybody will have to agree with me on that department. I'm pretty sure many of us, runners had such a great time and sweet moments before, during and after IOM 2013. So here I am, would love to share my EPIC, so-called Dramatic journey... LOL!

Pre-Run Journey
I took our racekits from The Marathon Shop after I was temporarily lost my way (silly me) a week before the event. Rashid, my personal supporter cum photographer and I took our flight from LCCT at 6.55 pm on Saturday, 20 April 2013. Our flight has been rescheduled from 5.20 pm to 6.55 pm. See, we wasted some time here already. Sigh. As soon as we touched down at the Langkawi International Airport, immediately I drove the rental car to find for a decent "carbo-loading" dinner nearby. We had a heavy Thai seafood for dinner. It was delicious nonetheless. After that, it was time to check in to our motel. We've decided to stay at Desa Motel, located just opposite the Fave Hotel, the official accommodation for most of the runners too. I never knew I would be running in front of the motel on the very next day. Gosh! Hahaaa...


Next, it was time for us to assemble all the running related gears and put it aside all the prepared stuffs on the table. I've prepared three 250 ml hydration bottles, one was for drinking water, one was for isotonic drink and last but not least, one was for Hammer FIZZ Endurolytes drink. Just in case we might woke up late tomorrow morning. Must have some contingency plan, based on my previous late start experience during MWM 2013... LOL! Around 11 pm, it was time to hit the sack and called it a day, although I hardly could sleep at first. Super jittery feelings, I guessed.

Around 3.25 am, Rashid woke me up after he had his shower. I was so freaking tired and still pretty much in a sleepy zombie mode at that time. So I dragged myself for a hot shower and prepping up. We were already late when our fellow running friend, Azim and his wifey, Lydia were waiting for us. Goshhh! Luckily the starting venue was not that far from my motel, circa 3 km.

We arrived at Resort World Langkawi around 4 am. There were already many runners at the starting line, approximately 1,000 in total. After we observed the moment of silence for the victims of  the horrific Boston Marathon bombings incident, we were horned off  at 4.30 am with the majestic firework display.  I decided to start the run easy since I didn't warm up properly and I haven't done my no.2 business. Hahaaa....
After 3.5 km, we were ushered into the dark Cenang Beach. Since it was still dark, all I could hear was the crashing waves. It was difficult to run on the beach since it was really dark. I had to follow a runner who was wearing his headlamp and keep up with his pace too. I was surprised to see that there was a couple who were sitting in the middle of the beach route. Some runners might bump into them if they were not alert.

Once I exited the beach section, I ran towards the road along the airport area. Before that, I had to do a quick pit stop for my no. 2 business first since there's not porta-loo around the route. Sigh! We were running under the shining stars and it was pitch dark. Although some parts of the road were visible with the blinking signals light from the safety VW cars, but I almost tripped after I stepped on the reflective square thingy in middle of the road. Thank goodness I didn't fall down.


From KM17 onwards we were served with a variety of rolling hills. Some of them were mild, some of the inclines were continuously long and some of them were tormenting, especially in Bukit Malut Hahaha... I gulped down my 2nd energy gel circa KM18. I had to say that I ate hills for breakfast and brunch too. LOL... Definitely an awesome experience. I reached KM25 marker after 3:22:07 and 8'16" pace. I ate my banana like hell here as I was so hungry. I also took my 3rd energy gel after my pee stop even though my throat felt funny after gulping down several energy gels. Urghhh... Later on, as I reached KM29 water station, I was surprised to be served with a cold coconut drink. Totally felt like heaven sent for me, although my coconut drink tasted a bit sour-ish. Not that I complained. Hahaa.. One of the cheerful volunteer wished me good luck before I continued my journey. Later on I found out she was Ms. Farah. I first met her during my FMV in PBIM 2012 after KM33, I think so...
All seemed to be running pretty well even though I stopped at every water station to get both of my knees and calves sprayed. Suddenly all hell broke loose after KM32 when my iPhone aka mp3 player was out of battery. I was running music-less and with no mile indicator while tackling the vicious relentless killer hills during my last 10 km . T..T Plus it was super scorching hot with less shades along the route. I kept on chanting some zikr for my mantra to keep my rhythm and to avoid any mental breakdown. =(
It was sooo hard to run in this blazing hot condition that I gave up and resorted to walk and it took me forever to reach the next WS in KM35. It was the highest point of the route. I was very very happy as all my water bottles were almost empty. After refuelling and soaked some icy cold sponge onto my head and face, I kept on running towards KM38 WS. Once I reached KM40 WS, I was taken by surprise when my personal photographer took my picture as I was already felt super tired. It was almost 6hour at that moment. Moreover, the Fave Hotel served me an icy cold Coke. Another heaven sent on a super hot day. I poured more Coke into my water bottle and kept on running towards the final 3 km. 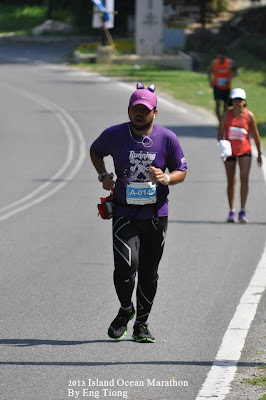 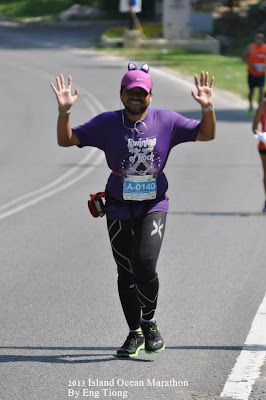 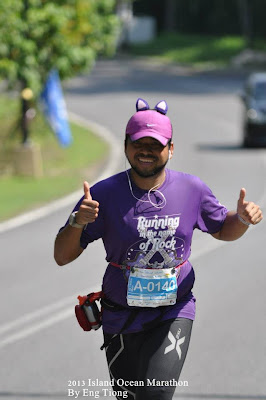 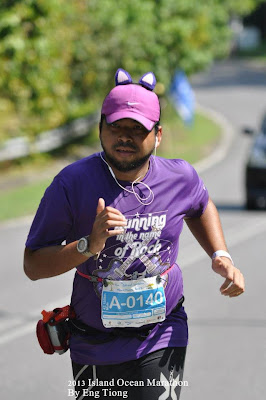 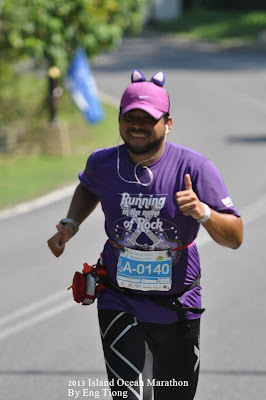 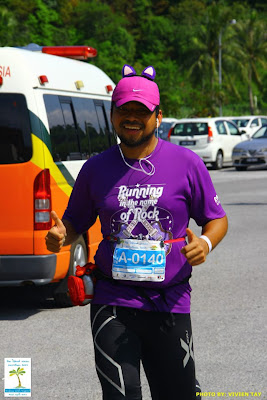 Mr Tey caught all my epic moments during the final 2 KM going the final uphill... Almost gave up already... That's the power of a camera... LOL! Thanx a lot Mr Tey... Awesome pic of a Kitty Guy.

The photographers were very clever to encourage us to keep on running even on an uphill by taking our pictures at the top of the final hill. Must stay strong and looked happy in picture liao. Hahaa... As I dashed towards the finishing line, another lovely ice-cream was being offered at me. I couldn't resist that offer, hell no! Hahaha.. Finally I could see the finishing arch and ran like hell towards it despite all the chaffings
around my thigh area. @..@ I managed to finish the run in 6 hour 08 minutes nonetheless...


After being handed the precious finisher medal, finisher tee and a cool goodies VW bag, I went straight way to refresh and rehydrate myself. Had plenty of watermelons slices, Gatorade drink and some bananas too.  I even took away 2 packs of nasi lemak, which was very yummy indeed. Now it's time for some post session photo shoots. Hehee.... =D


Well, what can I say, I was very pleased with this boutique marathon, where us the runners were their customers. We were pampered with cold coconut drinks, two extra energy gels, plenty of bananas, icy Coke and endless amount of Gatorade, Revive and cold drinking water. There was no timing chip and no cut off point as it was a non-competitive running event. I could see many runners ran in groups and took a group picture non-stop along the scenic route. They seemed to be having lots of fun too.

After the event, Rashid and I went for a lunch at the nearby ikan bakar restaurant in Cenang Beach. Since Rashid achieved his PB for this 2nd FM (4.44.02 aka Sub5, shaved 35min from his previous FM!), I asked him to buy me lunch to celebrate his victory.. Thank a lot dude! Keep on getting your Sub4 dream soon ok! More PB equals more free makan-makan celebration...Hahahaa! I love the grilled squid and the giant prawn... Yummeh! We dozed off once we reached our motel. Three of us went to Tanjung Rhu in the evening for a swim and photo taking activities. It was so painful to take a dip in sea with all the chaffings... Ouch!


We went to Pekan Kuah to buy some chocolates for our family and friends. Later on, we headed to Wan Thai for a scrumptious authentic Thai delicacies. I just loved their Somtam and Siakap Tiga Rasa... Definitely a mind blowing experience... =P
On the final day in this legendary island, we decided to take the Sky Cab to Mount Macincang. Unfortunately it was closed for their annual maintenance until 25 April 2013. Therefore we tried to have a look at Telaga Tujuh (Seven Wells). I've never been there before, as far as I could remember. So the three of us climbed the stairs up and reached the highest pool in no time. It was pretty tiring especially after the grueling IOM. We took some pictures too along the way. It's goofying time for us... Hehehee! 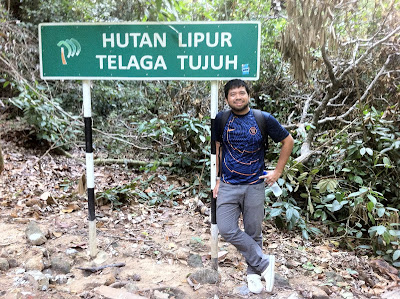 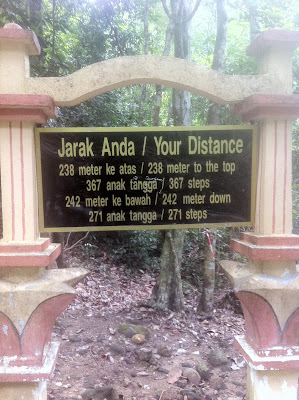 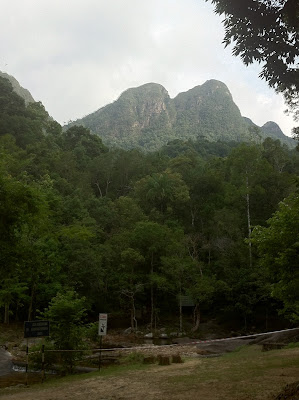 So, that's all folks for this race review aka random ramblings... Hahaa... Looking forward for my 2nd part of this Marathon Series, which is River Jungle Marathon (RJM). Can't wait to tackle the well known vicious Bukit Hantu in Hulu Langat... Bring it on, bebeh! Unleash the "hantu" inside me i never knew... ROFLOL!!! Thus i will try to improv my timing also... Ngeh2... See ya around then y'all... 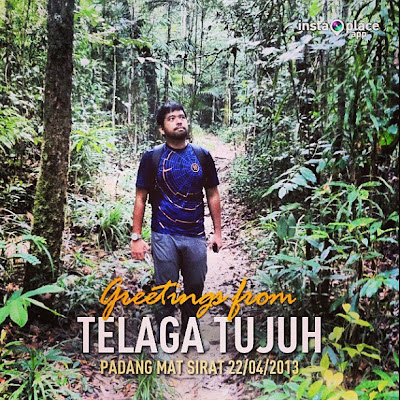