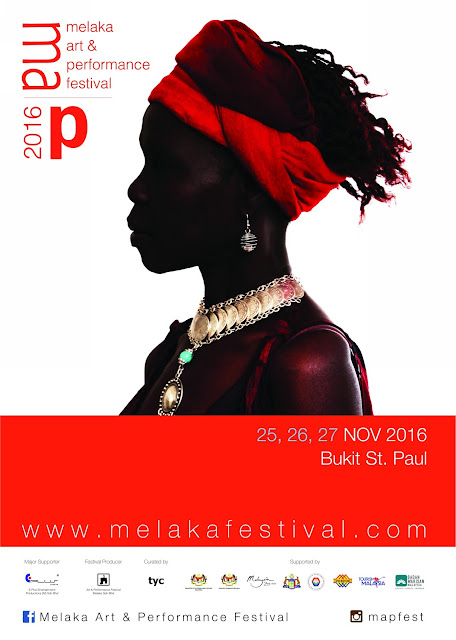 MELAKA, 21 October 2016 – The eighth Melaka Art and Performance Festival (MAPFest) returns to the majestic city of Melaka from Friday to Sunday, 25 – 27 November 2016, 10AM to 10PM, with world-class artists lined-up to showcase their internationally recognised works. More than 40 artists from 10 countries will muster at St. Paul’s Hill to paint the skyline of Melaka with multi-disciplinary art display like contemporary dances, visual arts, multimedia arts, paintings and video arts, just to name a few. All events and performances during the festival is free admission.

MAPFest, was established in 2009 by Festival Director Andrew Ching and Creative Director Tony Yap, and has since grew into a well-received and much anticipated event by locals and the global art community. Artists from Australia, France, Indonesia, Japan, Malaysia, Singapore, India and the United States of America will gather in the prominent UNESCO World Heritage Site, showcasing their global sold-out shows and newly arranged collaborative art performances.
“Over the years, MAPFest has brought some of the best art and performances to our audience and fans. The overwhelming support created a solid foundation for us to pursue our passion in promoting Melaka as a hub for various art disciplines. We knew that our efforts all these years paid off when we were informed that the global art community is supporting our cause,” said Andrew.

“In recent years, MAPFest was recognised and has received several awards for various categories by numerous local and international awarding bodies. We believe the festival has contributed to the growth of the art scene in Melaka and Malaysia. We will continue to undertake this path with hope that more corporations will join us to support the festival financially or in-kind, to share our passion and to cultivate budding artists. Public and private sectors are welcome to join us and play a more active role in uplifting the art industry.”
The eighth installment is set to elevate the festival with greater engagement, allowing visitors to conceive the art spiritually. Creative director and performance artists Tony Yap said that over the years, works presented in the festival were a stepping stone for the audience and fans to understand the fundamentals of art. “MAPFest has developed a philosophical vigor. The festival is now a rich ground where artists from different disciplines, background and levels of accomplishment can find a punctum for creation, collaboration, exchange and creative experimentation. Thus reminding ourselves of why we exist and the inexhaustible enthusiasm way for life is propelled through art.”

“We believe that the festival has reached its maturity for the public to further explore in art education. Only by examining the depths and the spiritual aspects of every work, will it allow us to immerse ourselves into understanding the true context and purpose of every art.”
One of the highlights of MAPFest 2016 is ‘Naked Peel Part 4 (The Metaphysical)’ by Christos Linou, a twelve-hour interactive cross-disciplinary dance installation that investigates cultural migration, racism and sexual stereotyping. The work was inspired by a Greek Cyprian orange peel recipe, reflecting the hardship of migrants to build a family in foreign countries, insulted with words of racism and sexual taunts. The artwork was developed by Linou during his Masters study in Melbourne University, and has since performed around the globe. A sequel from the first three parts will be staged during the festival.

MAPFest 2016 will be featuring various solo and collaborative performances over the 3 days festival. Main highlights include the MAPPING Programme, where performances are site specific and performed in various locations within the vicinity of St. Paul’s Hill; Cerita Pendik 1 & 2, a two hour solo or group performance by artists to showcase their individually unique art; and the finale, Eulogy for the Living, a two hour collaborative performance by all artists, directed by Tony. Other activities including free forums and workshops will be open for public participation.

“Themes of spiritual transformation create a frame for works of art. We inspire one another, support each other and encourage humble distinctions.” Tony added.

Enquiries can be e-mailed to mapfest@melakafestival.com.