Ever since I Did Not Finish (DNF) at KM48 68km category for R68 2015, I was so determined to finish my unfinished business. To slay this mental mind blowing killer route this year, no matter what. Honestly I was so traumatized with the bloody blistering heat last year that I've decided to downgrade to 50km this year. Seriously, I just want to get it done and dusted only. Hahahaa! Thank goodness I've made the right decision hehee...

Furthermore I've already had two DNFs for this year (Pink Ultra 2016 - 100km Duo & Kyoto Marathon 2016). So I could not afford to have another DNF. Berkecai mentalku nanti hehee...

I've asked my dearest training buddy Hazman to collect my racekit since I was away in Penang running 12km MHWHNightRun & JJCM Penang during the REPC hoho... Thanks bro!

Before the race day, I managed to squeeze in two 34-35km simulation route training. Wanted to get the feel while enjoying the elevation and lovely microwave heat. That really helps a lot! I felt safer running in a group too compared to running duo. Hehee... Thank you folks for joining my Upacara Lenggang Perut 34KM training before! =D

Two days before the run, I drank a lot of mineral water. Fearing the super hot and sunny Sunday due to El Nino phenomenon I was expecting dehydration & cramps would be some of the major issues during the hot and humid race.

The day before the race, I have been invited to attend the Exclusive Preview Day for Dragon Run in The Ranch, Genting Highlands. I took it as my warming up run along the 5 obstacles samples. Just want to loosen up the muscles and get physical. I'll blog about it in my next entry. Thank You CitrineOne for such a lovely invitation. I had so much fun too.... =D After having a scrumptious dinner and chit chat with Ben, Joll & Judin, I headed back to my crib and called it a day.
Managed to snooze a quality sleep that night although I was still feeling a bit sleepy upon reaching the race village circa 5.30am++. I had to rush to the venue because I need to hand over Marathonbaker Mocha energy bars to my fellow running friend, Ijan. He took part in 70km category. That's insane! After the flagoff I immediately went to the Dewan Orang Ramai and performed  Fajr prayer. Now it's time for me to prep up physically & mentally for the run. 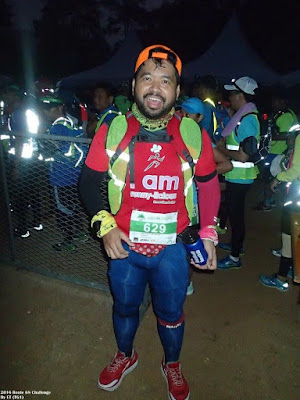 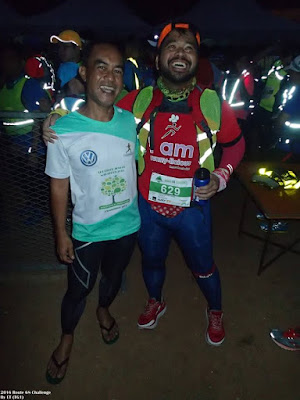 With Abam Jawa @ Nosly n the house y'all..ould not find his wifey, Eena Amir though...
After the quick inspection on all the mandatory items, I went into the starting gantries. We were being flagged off at 7am sharp. Off I go. Running at an easy pace at the first 3KM. Tried to run even at the first incline or whenever I saw the almost flat stretch. After 5km or so I tried to speed walk because I already felt my left calf tend to tighten up and cramp. After the first WS (KM5.5) I continued to run walk run along the incline. I smelled a stench at one of the corner but at first I thought it was a dog or monkey's carcass. Little did I know that I smelled a 3 Days rotten corpse once I ran back at the same spot. Yikes! Creepy much... ~~ 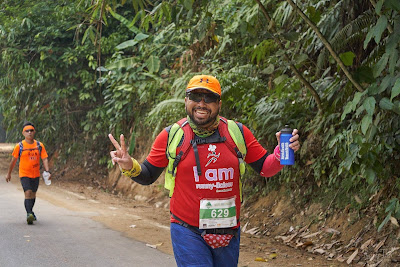 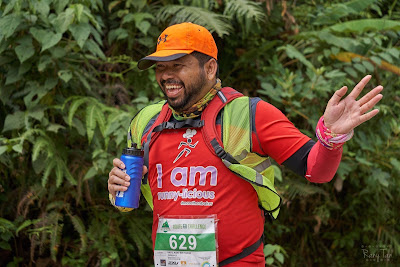 Stopped at the nearest bush for my no.1 business before reaching the 2nd WS (KM10) Refilled my bottle and off I go. No time to waste. I need to reach the next WS/Check point before 10am (3 hours). Jeff Ooi already told me earlier that they were very strict about the cutoff time implementation this time around. No more mercy. So I kept on run - speed walk - run until I reached the A3 Genting Sempah CP (KM16.5) by 2:45:23 ! Woot2! First mission accomplished..

I ate some biscuits, watermelon and bananas while refilling icy drinking water + 100Plus + ORS. I started to feel cramps had already building up on both of my hamstrings. No time to waste here as I had to make it to the u-turn point KM25 by 1 hour++ 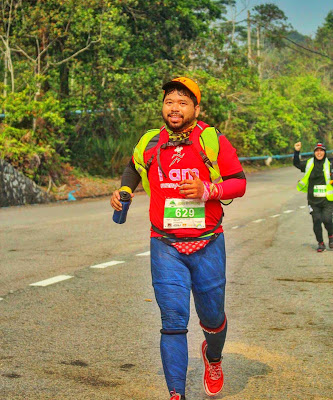 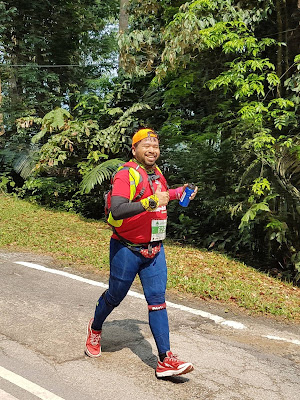 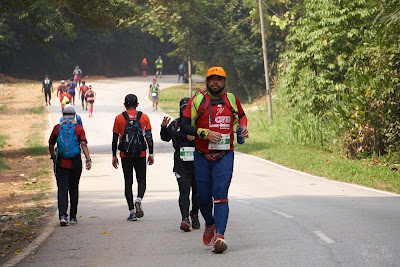 From there onwards, it was a 8.5km++ downhill run all the way. I started singing/chanting Crush song by Yuna featuring Usher during my downhill run. I kept on repeating the down, down, down, down lyrics hoho! I continued running/jogging down the hills as I need to compensate the time I've spent during the uphill battle. I really really require enough buffer time for me to get back to A3 CP before 1pm.
The downhill run felt like forever to reach the u-turn point at A5 CP. It was already getting brighter and hotter. Met so many dedicated photographers along the way. That really brighten up my mood & day. Thanks folks! Finally I reached the u-turn just in time for a quick break, refilled my bottle, put more ORS. No time to feast on the delicious looking spicy Nasi Lemak at that Checkpoint. Plus I don't want to run on an upset tummy later on.
Managed to cling on to Mr Yahya & Ms. Nasa, the ultra power couple on my way back to CP A3. We were speed walking all the way along the gradual incline. It was getting hotter and stuffier. So i put on my shades, buff and cap. That helped a bit hehee. Thank goodness Sis Suzie passed by and offered us cold Cincau (Black Jelly) drinks. Really need that icy cold sugary stuffs at that time because there were no longer ice cubes at the next WS. Thank you so much Sis!

Fearing that we might not be able to reach the CP before 1pm, they kept on reassuring me that we can make it in time. The incline was getting steeper at some point, meaning that we were getting closer to A3 CP. I really had to stop at the spring water at the roadside just to drench my face, head & buff with the cold water. Felt so refreshed & alive to survive the hot sun.

Finally we reached CP A3 back by 12.45pm (5:46:44). Yayyy! I took a longer break here just to get rid of the pebbles and put some ice cubes in my cap to cool down my head. Had some bananas, watermelons, biscuits coz I felt so hungry! It's already lunch hour hoho... After refuelled with Marathonbaker Runbananaz & refilled everything I made my way back when it was still cloudy and not so bright hehee... Thank goodness I really need to get moving by that time coz 3 hours solid was not enough for me! 😝🙈
After going uphill at the steep incline in Genting Sempah, I tried to run all the down. It was not that easy. With cramps started to threaten my both hamstrings. I decided to go easy but kept on moving. Again upon reaching at the crime scene, I thought I've arrived at the WS. Apparently there were many homicide police vehicles at the corner and I could see the family members of the victim at one side, mourning. Poor them. Felt awkward running through the crime scene, just like in CSI series.

After that I stopped at the next indie Solat Station to cool off my head and face. The icy cold syrup drink was definitely a heaven sent.. Not too sweet, just nice! Thank you so much akak baik hati tuh... 😍 👍
Not long after that I stopped at WS A2 to put more ice cubes in my drinking bottle. Although it was no longer hot and bright but the humidity was insanely a killer! It's impossible to run downhill in this weather. Felt so hazy too.

As I reached A1 CP, I knew I was running out of time to finish within the cutoff time. I could afford to DNF after running the whole route. Afer munching some bananas, I tried to run speed walk run. The final 5KM felt like forever. Apparently it was 2KM extra according to my Garmin. I really forced myself to run my heart out during the final 3KM. I gave my all. Finally I made my dash when I saw the FL Gantry was within my sight. Crossed 52km++ at the finishing line in 8:53:26 (Average pace 10.40 min/km) . Yayyyy!
At last I managed to redeem myself from the DNF last year. The awesome finisher medal and finisher tshirt were my ultimate motivation to finish strong! 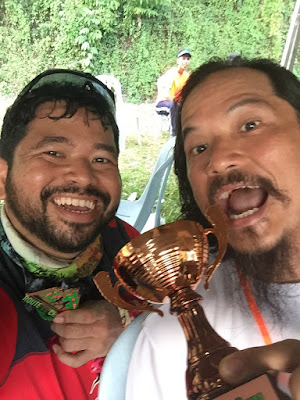 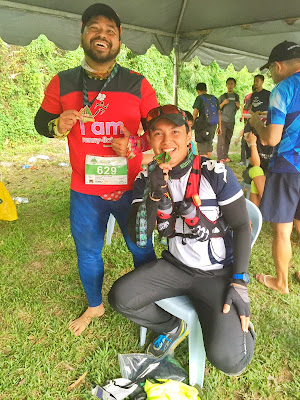 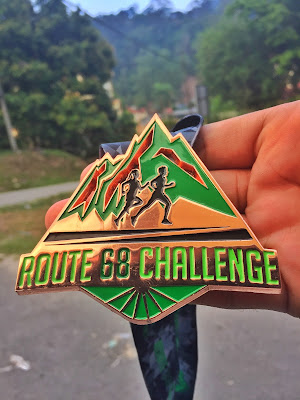 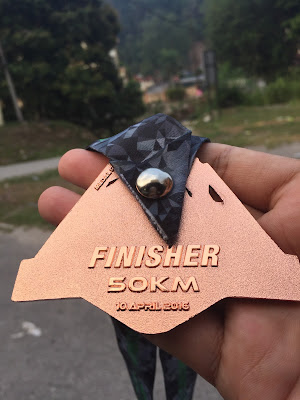 After the run, it's time to take some pictures with all my friends. Congrats to all the proud finishers regardless of 50km and 70km categories. For those who DNF this edition, fret not. It's not the end of the world. Come back stronger, train hard and smart to finish your unfinished business next year then. It was definitely a tough route for most of us.

Congrats to Mr Jeff Ooi and fellow organizers for the strict cutoff system and smooth running event, all the selfless dedicated volunteers at every WS, to all my friends who came to support all the runners under the blazing sun, Abg Nosly, Razinah, Atiqah, Amalina & Sis Suzie. Special thanks to al the dedicated photographers, ET Tey, Rany Tan, Sumer Heh, Maui, Ray, Soon Endurah, Chen Hong Bing etc. You guys were fantastic and amazing!

I really had a good time. No blisters, just minor chafings at the thunderous thighs. My knees were behaving well too. Thank goodness, syukur! Except for the sore hamstring hehee...

Till then, toodles chuols! =D