Hello there fellow silent readers, ever supportive followers, my brothers and sisters of runninghood. My utmost apologies for being hiatus for quite sometime at the moment. Being occupied with some other work related stuffs and struggled to keep both of my injured knees at ease. Let's recap my last running event before this holy month of Ramadhan Kareem 1434H. It was my 12th Half Marathon to date, Somban HM 2013. =P
At first me and Rashid, my trusted accomplice have already decided to participate NTV7 Feel Good Run 2013 by doing 15km run.  However, after being poisoned by my running buddy, Azim, we were thinking of ditching this run and wanted to run Seremban Half Marathon 2013 (SHM) since we've never run on this event before. Unfortunately there was a Campus Run MOA Sport that was being held on the same date 07 July 2013, where Rashid was appointed as the manager for MARDI Contingent. Therefore he didn't have any other option and need to participate in this event and manage other MARDI runners in all categories. Looks like he managed to grab the Champion title for MARDI and the Best Manager's title too. Many congrats to him! He's now a MOA Champion 2013... WoW! @_@

So, I've decided to "poison" my backup partner in crime, Zen. to accompany me on this new journey. My strategies worked just fine. I went to pick up the racekit in Petaling Jaya. I was surprised to see there were lots of goodies inside the bag. Hmmm, pretty good sign nih, I said to myself, since the quest for the Top 200 limited exclusive pewter finisher medals seemed a bit impossible for me. Thank goodness that there were 8 other running events that were held on the same date, such as PD International Triathlon, Penang Run Series 2, Ipoh International Run, NTV7 Feel Good Run, Peace Run Penang, Salomon S-Lab Jamboree Trail Run, Rise "N" Run 2.0 and Putra Charity Run Johor. It seemed that all the organizers did their best efforts to cram in their respective event before the arrival of the fasting month.

Before the D-Day, I went back to my Mom's kampung in Rantau, Negeri Sembilan to attend my beloved late Grandma's tahlil and pre-Ramadhan doa selamat recital. I saw several Tri bikes on the cars at the PD Toll Exit. There were so many vehicles heading towards PD on that day. For me, it was like a carbo-loading session (padahal lari HM jer pon... LOL!). I mean, who could resist the succulent taste of Nogori's delicacies, Daging Salai Masak Lomak Cili Padi, Ayam Masak Merah and Ikan Sembilang Goreng Bolado... Yummeh!

Fast forward to the historic day, Zen and I dashed towards Seremban as early as 5am. Although I was feeling sleepy upon waking up on that morning. I'm so not a morning person, most definitely. Yawned! Luckily there were not many traffic along the way. Parked my car in the State Mosque compound and performed Subuh prayer there. Once everything was ready, we walked down towards Padang MPS

The half marathoners were flagged off on time at 6.30 am by the royal highness,YAM Tunku Dato' Seri Utama Naquiyuddin Ibni Amarhum Tuanku Ja'afar.I was running along the route towards Taman Ming Hoe, Taman Rahang, Taman Seremban and Taman Merdeka Height. Circa KM3, I was surprised to see our favourite Femes Bunny, Kak Lina whizzed past me. Said hi to her too. It seemed that I was struggling to keep up with my pace and breathing at that moment. And then we were greeted by the first lovely incline. Not that mental because it was still dark and cool morning. I was running towards Senawang when I saw the infamous Taman Rashidah Utama on my left side. By that time, I have to run in a straight line after one of the runner advised me to stay on the line because there's no safety cones were being placed at the road side. Luckily the motorists in Seremban were very careful and patient bunch. I reached Tuanku Abdul Rahman Stadium Paroi around KM8. I took my first energy gel here. My running map could be seen here in my Dailymile.

Then we were running towards Bandar Baru Ampangan (KM10) and I could even drop by at my Auntie's house in Taman Purba, located just  behind the Plaza Angsana Ampangan. Never thought I could reach Ampangan by foot from Seremban. At 11KM, met two familiar faces and managed to smile happily upon passing these friendly peeps. Abg Zaini was my unofficial photographer that day, while Raimie was waiting patiently for his Mommy dearest. It was great to see some familiar faces here as it was getting brighter and we had to run facing the sun along this stretch.

Afterwards, I took the left turn upon entering Taman Kayu Manis. I could see many housing estates along the way towards Taman Sikamat. Took my 2nd energy gel once I reached KM16, if I`m not mistaken. From KM7 - KM16, it was like a "tag and chase" game for me and Kak Lily. I kept on hooking on her from far and managed to overtook her too once in a while. Thus making my HM run felt a bit effortless and not that dull boring one. After KM16, she pushed her turbo speed and I was left eating her dust, eh! =P

It did not get any easier upon reaching the main junction. There was another 2km to the finishing line when I had to brave myself to cross the busy traffic as the policeman was not controlling the traffict give way to us lethargic runners. Instead, he was giving way to those motorists. I could not wait any longer as it was getting hot and sweaty. "Good" job there, Mr Policeman! To make things worse, I had to run the last nastiest hill with a bunch of school kids doing their 10km leisure Sunday walk/jog hogging the lane. Mental I tell ya. Oh, the plot thicken when I almost bumped into a plumpy Chinese school girl who was taking her sweet time crossing the street without looking around. Sigh! 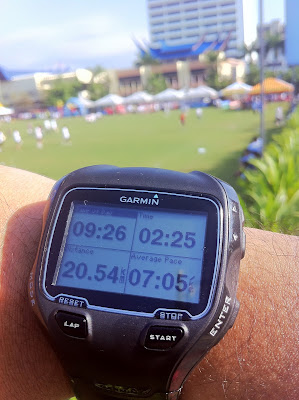 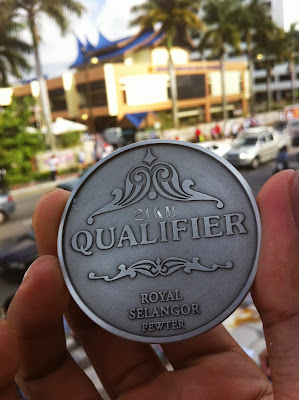 Finally I crossed the finishing line within 2:25:38. Thank goodness, although it was a wee bit under distance (20.54KM) but I'll take it for now. I thought I had already missed the limited finisher medal at first. But I saw my hard earned medal at the next counter with the certificate. I was ranked 126th out of 157 runners in my category. Ok lah, not bad at all... Hehee... Went to take my lucky draw stuffs aka light snacks, managed to drink some icy MILO and Fitnesse cereal before went for a post race photoshoot with SCKLM Pacer Irwan Anuar, Azim, Zen and Kak Lily. 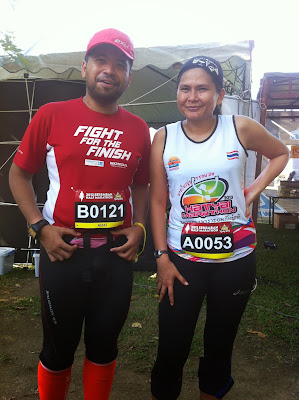 Overall, there were several pros and cons of SHM 2013. Here are the 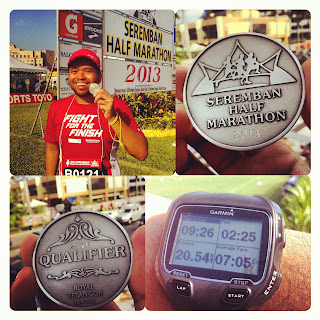 Oh, before I end my throwback race report, I would like to express my gratitude to Kak Lina and Abg Zaini for all the pictures of me during SHM and her exclusive giveaway stuffs, so lovely indeed! Can't wait to repay her kind gestures asap. Rasa nak hantar ke opis atau rumah beliau hari ini jugak, eh! Mihmihmih.... Thank you very very very much for all the awesome gifts and lovely pics. I'm flattered... =D