Perodua Crazy Hazy Race For A Cause 2013 - Lemauness No More! =D

Dear followers, silent readers, my beloved running buddies, brothers and sistas of running community. After the worst haze that has been enveloping our country, especially Klang Valley area for about 1 week, now it's about time to share with you guys out there on my not so recent race review. My utmost apologies for this late race review. Felt lemau to write eh? Sigh... T..T

I immediately registered for this run since I am a proud owner of a Perodua MyVi. Must support that brand name no matter what. Even though there was a MAEPS-MARDI Trail Run that was held on the same day. Perodua tetap dekat di hati, Chewah! After all, i can just run the trail everyday here. Hehee... ayat nak sedapkan hati sangat.. Huhuu.. I received my racekit 2 weeks before the event. Pretty fast too as I was completely forgotten that I opted for  it to be sent via courier. Senile old me... LOL! The running tee's design was nice although some of the little words stickers were easily peeled off after my 1st break-in run in the MARDI Trail. Hence, I've decided to not wearing it during the event. Could not complain much for the cheap RM30 registration fees, right? @.@

As the haze was getting worse and our legs were getting itchier to run, Rashid and I decided to join a LSD-ish run organized by POJ Runners, called POJ Kami Datang 2.0. It was a night run that was held on Friday, 21 June 2013. There were 17 runners came to support this event, just like le Sabuns Ultra LSD. Despite of my lemau-ness and sore muscles after the Mount Jerai Challenge the week before, I braved myself to finish 13km lemau run, with a long break after 6.5km for the makan2 and group photo session. Managed to break in my SCKLM running vest too.. Comfy just like last year one...  =D

Fast forward to the day, I woke up around 4.30 am, got up and had my Nutella sandwiches to stimulate my bowel movement asap. I went to fetch Fadzil, my running buddy in Taman Maluri and realized I forgot to bring along my knee straps. Oh well, let's hope that both of my knees will behave well today, I said to myself. On  the way to Palace of Justice (POJ), we stopped at the RnR MEX Highway for Subuh prayer and did my no.2 business.
We reached POJ circa 6.30am. Still got some time to do no.1 business (jittery pee, as usual) and did some light warm up. Although it was hazy, but I did not feel the lemau-ness anymore, unlike Mizuno Wave Run. Met with Razinah and Sis Eena before the race and took some pictures with them. After wishing each other good luck, we were flagged off by 7.15 am, I guessed.
The first 5KM was doable although I was struggling to keep with the pace. Tried to catch up with Padel for a few hundred meters before I slowed my pace. Then I tried to hook up with Aafong blistering pace at Sub 6min/km, but only for the first 5KM. I managed to do 5KM within 30 minutes, thank goodness! Mostly because it was a flat route. Bumped into Nadea Sukarno, my ex-pacee after KM3 but she had to slow down after 6KM, maybe due to the hazy conditions. She seemed to be having a tough time to run in the haze. I was huffing and puffing to maintain my pace after KM7 too. I could smell the smoke from the forest by the highway. Blerghh.. Gulped down GU Energy Gel - Mandarin Orange is my favourite after KM8. We were running along the Men's Health/Kidney Run route. Managed to do 10KM in 1:03, not bad lah, still within my targetted time of 1:40 hehee...

The last 5KM was the slight hilly flyover route heading towards POJ via 1Malaysia Futsal Court and the posh neighbourhood of Putrajaya. Still struggling with my pace at this moment although I know we were almost near the finishing line. I tried to pace up with one chinese girl but I could not go any faster, my left knee felt a tad sore after 10KM. I crossed the finishing arch in 1:37:46 (Garmin: 14.87KM), 4 minutes after Aafong. Yayyy... Later it turns out that I was at the 165th placing out of 479 runners in the Men's Category. It's a PB some how... No more lemau feelings... It's all in my mind... Yayyy... =D

After I took the finisher medal, certificate and light snack pack, I went to have the refreshing Dutch Lady chocolate milk drink as my recovery drink. I kept on commuting to the Dutch Lady van for 3times. Minum sampai lebam pun boleh.. LOL! Then it was time for a group and wacky solo photo session as the haze was getting worse.Took lots of pictures with the usual suspects, running maniacs and running bloggers... Hehee... I coughed non-stop when I could not stand the stingy burning smell. So uncomfy... Curse you haze! @..@ 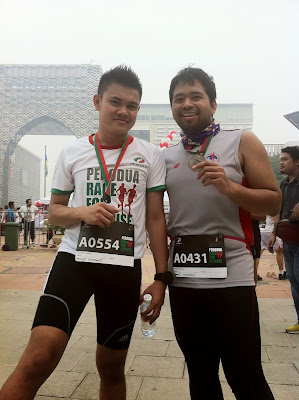 Group photo session with my We Are Runners (WARs) was a must! Even without Rashid in the picture... hohoho... I had a sore throat too you know... hiks! Oh by the way, met MatJoe, one of my blogger friend for the first time and a photo shoot was a must then... =D

Overall, it was a job well done. Credits to the organizer for being able to organize such a great event despite the bad haze conditions. Plenty of water stations along the route, 5 of them! All of them were serving us with cold drinking water and isotonic drink (100 Plus). The route was safely marshalled. The traffic was minimal too on that day. Looks like more people chose to stay indoor during this haze, unlike us, runners, the crazy bunch. LOL! I'm looking forward for next year's Perodua Run already... Felt so good!

After the health hazards run, eat lah, what else! It's melantak time... LOL! Had a scrumptious brunch with Fadzil, Chiew and Heng at Zouk, Putrajaya... Yummeh...