Hello there, Happy blessed Friday to all of you, my fellow readers and followers, my beloved brothers and sisters in this Running community. Thank you so much for reading my humble shabby so-so blog. I just wan to share with all of you out there on my recent running event. So, here is my chronology, as usual... Just bear with me ya!
I went to Port Dickson to attend my cousin's solemnisation and wedding reception on Saturday, the day before the event. Afterwards, I rushed back to collect my racekit along with Rashid and Azim's at POJ, Putrajaya. It was a bloody scorching hot Saturday evening. The racekit collection was a breeze, in and out in less than 3 minutes, since it was already 3pm. Love the flouro Yellow running vest, matched with my new Yellow Mellow GoRun 2 from Skechers too.. =D  I got dehydrated easily even though I was there for a while only. Had to blame the hot sunny weather in Putrajaya. Went home to rest my feet after the long day in the sun.

Fast forward to the Sunday's morning. Woke up circa 5am, getting prepared and get ready to go to Putrajaya with my usual accomplice, The Speedy Demon of Mizuno Wave himself, Rashid. Must highlight the Mizuno Wave shoes thingy here ya, huhu... We went to perform our Subuh prayer at the Iron Mosque, Sultan Mizan Mosque and managed to hand over Azim's racekit to him after the prayer. Fuhhh...

It was already 6.20 am when we reached the starting point. Deposited our bag safely just in time. I managed to do some light warm up and stretching only before we were honked off on time, 6.30 am. At first I tried to target to finish this 16k run within 1 hour and 45 minutes only. Little did I know that I'll be having this lemau blergh moments later on in my run.

The first 4 km route seemed new to me as I've never ran along this route before. As I entered the bridge, suddenly I felt the urge to do both businesses and forced me to stop at the Taman Sri Empangan toilet. i decided to do no.1 business only since I was running out of time already... Had to soldier up and tahan sajala... LOL!

The route afterwards felt familiar to me since it was the Putrajaya Night Marathon HM route. The only difference was this was a Day version of it. Hehee... The weather was overcast throughout the day. Looked like it's gonna be raining later on. Circa 8KM, I took one energy gel since I started to feel the hunger pang. Normally I took a bite on my Gardenia bread before any running event. But on that day, I refused to eat anything because it might stimulate my bowel movement during the run.


After 10 KM, I started to slow my pace not because of my old injuries strike back, but I became sooo freaking tired mentally and started to run it halfheartedly. To add salt to the wound, there was NO more isotonic drinks provided after 10KM onwards... Gosh! It shattered my motivation even more... The only thing that was on my mind at that moment which kept me driven to finish this race asap was the MILO Van at the finishing line. Like seriously... LOL! T..T

There I was running like a Lemau Zombie, especially the last 2 KM... Could not muster any strength in the tank and the urge to do no.2 business kept on bugging me still. Urghhh! You should see my pictures during that stretch towards the finishing line. It was windy and cooling but it didn't help much to boost my spirits. Finally I crossed the finishing mat in 1:52:37 (net time), 1:55:00 (gun time), got the 740th place out of 1438 runners in the Men's Open category. Not that bad lah kan... =) 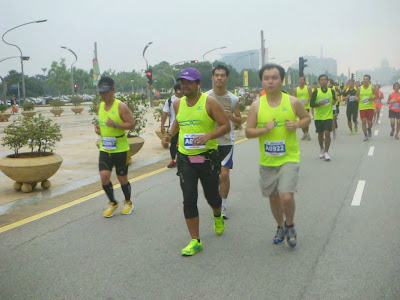 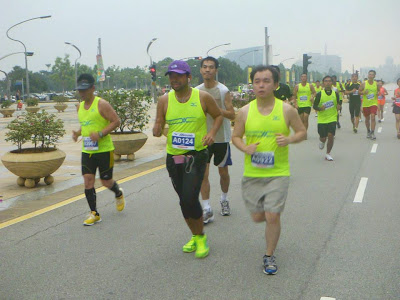 Then it was time to pick up my goodies bag, Oh my I could already see the rendition of Energizer Nightmare Run 2011 in the making already... O.O Not enough manpower of volunteers perhaps to cater the huge number of 16km finishers this year. But we runners were a very patient bunch, I must say. So we kept on waiting patiently for our turn to get the goodies bag sequentially, plastic bag < finisher medal < Nestle Fitnesse < Perskindol < Tous le Jous pastries.
Met with the superb Marathon Mommas aka KraziRunners (Kak Lina, Kak Hanim, Kak Nannoor and Kak Millie) after I took my icy cold sinfully sweet MILO drink. Managed to took some picture with them too... Then I had several slices of juicy watermelon and skipped the taufufah counter. It's time to take some pictures with my running buddies while relaxing around Palace of Justice and Putrajaya Holding area. 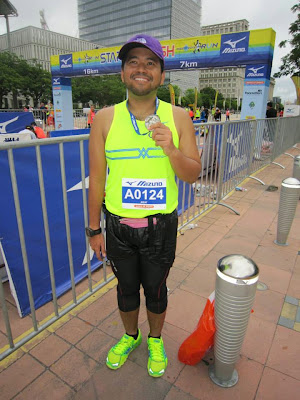 Overall, it was a good running event, could be organized better, esp more isotonis drinks, lots of marshalls along the route, perfect weather to run, looking forward for the next year event... Change venue to UPM please ;D Until then, wish me luck for my inaugural Kedah International Mount Jerai Challenge this coming Saturday (Gosh, tomorrow occay!) @..@ Ttyl.. Adios amigos!