Hello there fellow readers. my beloved brothers and sisters of Runninghood. Yeah I know this race report was soooo over-due, expired already since it is already May 2013 but better late than never, right? Any how, I must share my unforgettable experience running in MWM 2013, The First Women Marathon In South East Asia as a pacer with all of you.


Ever since I heard about this inaugural event, I was so psyched up and would really like to contribute in any way in making this event such a successful running event for the active ladies in Malaysia. The opportunity came when a cousin of my colleague, Miss Nadea Sukarno offered me to be her pacer for Half Marathon. It was an honour for me to be have a pacee like her. Little did I know that she was a triathlete and she has also finished several FM events before and I knew it's gonna be a tough run for me to keep up with her blistering pace... Especially when I was still recuperating from my inflamed ligaments (both knees) but I vowed to be a good pacer. Plus, it was all about being selfless and in support of the empowerment of the running ladies in Malaysia, in conjunction with the International Women's Day and also will be doing my 11th HM run too... =P
Since this is a Women Marathon, I chose to wear something fancy, something girlish yet looking strong. Hence, I chose to run as a Wonder "Fat" Guy (I'm not a Woman, obviously LOL!) with my golden tiara, "silver" bracelets and golden Lasso of Truth, inpired by the famous DC Comics Superheroine and one of the Justice League member, Wonder Woman. Pretty cool, huh? If I were to run an All Men's Marathon, Captain America or Thor would be in my consideration... #justsaying (Read: DC and Marvel Freak!). Me and Nadea wanted to run fancy since there's a prize for the Best Dressed Couple. Nadea had to run in tutu since all her AirAsia colleagues were wearing it too.

She told me that she was busy with her work schedule, so I offered myself to pick up our racekits on the Friday, 5 April 2013. The process went like a breeze in no time. I realized it was the official opening of the MWM when I heard the gimmicks of the launch. I was stoked when I first saw our respected legendary, Ms. Kathrine Virginia Switzer. She looked way younger and still maintained elegant than her biological age, 66yo. Must be the miracles of running that really defy the ageing process. One of the highlights of her achievement was very inspiring when she was inducted into the National Women's Hall of Fame in 2011 for creating a social revolution by empowering women around the world through running. I said to myself, how I wish I could have some pictures with this her, a renowned  legend in the running world.

Fast forward to the D-day. Well my race report will be incomplete IF and only IF there's no element of drama on the running day itself. For the first time ever, Rashid and I woke up late, OMG! (Read: 5am!!! Mujola tersedar bila Nadea call aku... *Sigh) @_@ Panicked like hell, yet still managed to get ready just in time since we have already prepared the running stuffs the night before. I drove to i-City like a maniac F1 driver. We arrived around 5.45am and started to run circa 6 am, 30 minutes++ late... Goshhh! So sorry, Nadea for kept you waiting since her bib number was still with me. T..T 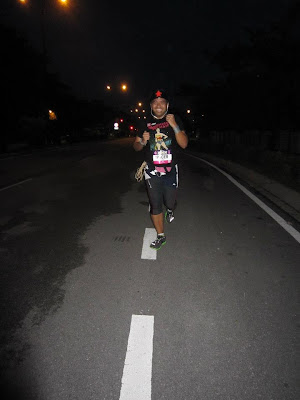 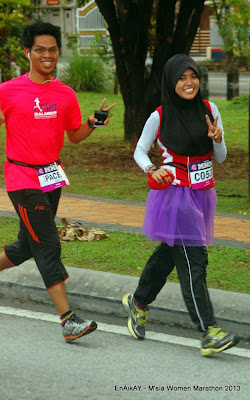 So the three of us, we ran in the darkness of the wee hours. Af first it felt like we were doing a normal LSD run minus the HM pace. There was no other half marathoners in sight until the first roundabout near Shah Alam Stadium, circa 10 KM. After 10 KM, my old injuries kept on bugging me, which forced me to decrease my pace and I could not keep up with Rashid and Nadea's pace. From that point onwards, Rashid was her "accidental" Pacer, since his pacee, Dr. Fong was already too far to catch up with. 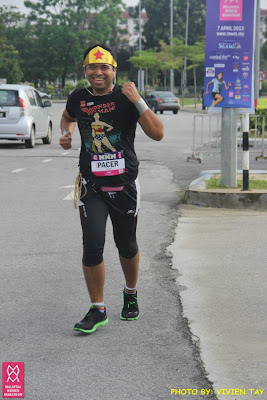 The route took me along the picturesque landmarks in Shah Alam like the majestic Blue Mosque, Raja Tun Uda Selangor State Library and Royal Selangor Theater made my run on that day felt almost effortless. The sky was overcast throughout the morning, thank goodness. They were running about 1-2 km in front of me until I lost their sight totally once I reached the uphill route near UiTM Shah Alam main campus.


Along the route towards Section 7 (KM 17 - 18), I saw the FMVs aka Krazirunners like Kak Nannoor, Kak Millie and her pacer, Ultra Kam, Razinah, Idot and her pacer, Izman and last but not least, our Fames Bunny, Kak Lina running strong and happily on the opposite side of the road. I could never imagine how did it felt like doing FM on a hilly hot route in Shah Alam. I must admit the inclines were ass-kicking nasty, especially for full marathoners. Full Respecto!

It was getting hotter around 8 am as I could see many lady runners were making their way back to the finishing line. The last incline towards the finishing arch was the nastiest of all and the photographers were forcing us to keep on running even on the incline so that we looked good in the pictures. Hahaa... My goodness! I crossed the finishing line in 2.29.11, 8 minutes after Nadea's timing of 2.21.26. I was so proud of my pacee for finishing it strong.

For the first time ever, I got to drink the icy divine sinfully sweet Milo repeatedly sampai lebam since there was no queue at all. The Gardenia's bread, bananas, apple and Fitnesse cereal breakfast served were sufficient and awesome. While waiting for my silver pendant to be engraved, it's post-run photo shoot moments for all of us. 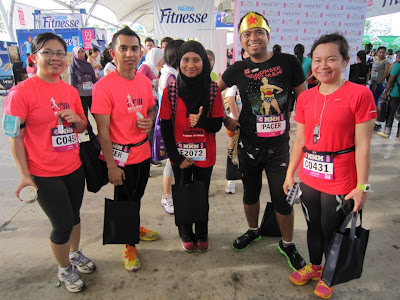 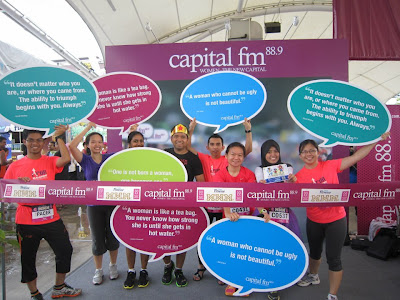 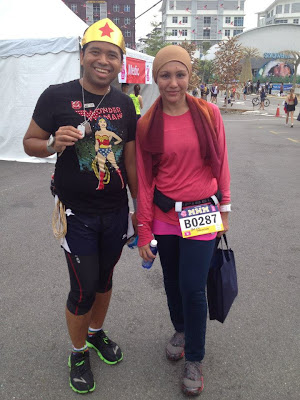 Out of sudden, my dear friend Yus told me that the living legend, Ms. Switzer was still around for me and Rashid to take picture with. I was in ecstatic. I just could not believe that I was very fortunate to meet and greet the legend in person. She loved my Wonder Woman shirt, stating that people once called her the Wonder Woman too. Yayyy... It's like a dream come true for me. She was super friendly and smiling all the way. =D


That's all for now. I've done my 11th HM here in my hometown, Shah Alam. Running as a pacer really taught me to be selfless and gave my best to pace Nadea. Who cares about the timing. What's more important is knowing that she completed her HM strong in this inaugural historical running event. Her tenacity really inspired me to train well for my future FMs and dualthon perhaps, since I don`t know how to swim... T..T

Special thanks to all the hardworking volunteers at every Water Stations, the marshals that manning every junctions and roundabouts efficiently even on a microwave hot day. Not forgetting Sifu Ultra Ray for being the Chief Volunteer and his fellow associates. Despite it was an inaugural event, it was well organized. Perhaps we can replace the pareo with a custom made kain batik? Much better then...

Till then, to all the runnings sisters out there, be proud and let's rejoice yourself because you were part of the history this year! Looking forward to see more and more women out there to take up running and practiced an active lifestyle. Thus, if you want to stay looking young, you must keep on running...  Rahsia awet muda foc lagi... X caya? Ask Rashid, the living proof... LOL!!! Ho-yeahhh!


P/S: For more details, do visit the Krazirunners blogs below for their FMV journey ... I told you, they are the true Marathon Mom @ Divas... Ada style lah... Definitely truly inspiring!!!  =D