Owh hello there to all my fellow readers, followers, my brothers and sisters in Runninghood... Have a Happy Productive Tuesday to all of you. I would like to share my 1st impromptu back 2 back 2 back madness activities during the last weekend and how I reap the benefits from it indirectly. Hehee... So, here we go!

Squash & 23K LSD POJ (Friday, 10 May 2013)
As usual, me and my colleague, Nizam has planned to play squash every Friday evening after  work, around 5.30 pm. We just played it for fun and polished our rusty skills after the long hiatus. But still, I sweat bucket loads. Gosh! So, after 7.15 pm, I drove to POJ since I've promised to do my last LSD before the Hat Yai Marathon with Kak Nannoor, Razinah, Izman and Baman by 8 pm.

Thank goodness, it was a pretty windy cooling night for us to do LSD. I saw many runners gathered around near POJ not knowing that they were there for a night run, photo session and for a cause, to show their support too. Kak Suzie and Arman was there too, so I was told by Razinah.

Me and Kak Nannoor targetted to do 25 - 30km LSD, while Razinah planned to do at least 15k. I followed Kak Nannoor easy peasy pace during the LSD session, while Izman and Baman did their LSD run at their speedy chatty pace, my goodness! Razinah could not keep up with both of us since her knees had not been fully recovered from her recent Mount Kinabalu hike via Mersilau Trail. In the end, I have to be satisfied with my 23k, while Kak Nannoor and her 20k, Baman (18k), Izman (15k) and Razinah (14k) since it has already started to drizzle a bit by midnight. As expected, I saw our living legend Sifu Ultra Ray was doing his LSD at his blistering speed of light pace. Full respecto!

Done with my LSD run, I went home and dozed off right away. Circa 5 am, I woke up and went to fetch my hiking companion at Klang to go for my 1st hiking ever. The last mountain that I hiked before was Mount Angsi, located in Negeri Sembilan in 2000. Earlier on, Zinov invited me to join him and his fellow running buddies to run the trail in Mount Nuang. I agreed to join but I'll just do the normal hiking since it was my 1st time to hike this majestic mountain. Plus it was the highest peak in Selangor (1,493m)! Yosh... 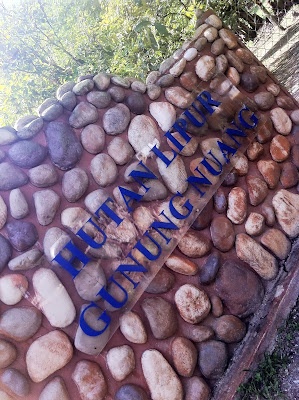 Mount Nuang - Maiden Hike (Saturday, 11 May 2013)
We gathered at the starting point at Kampung Kuala Pangsoon, one of the three trail trails going up Mount Nuang summit. Me and my friend started the hike first around 7.30 am, while Zinov, Kam and Khairi Muin took their sweet time. At first the trail was runnable with a mild incline along the way towards Camp Lolo, the famous camping site but we decided to just keep on hiking since it was still a longggg way to go.
Zinov and the gang overtook us when we were resting at the 2nd cement hut. We heard the torrential sound of waterfalls near Buluh Minyak rest stop (W6) and tempted to take a dip since it was getting hotter and humid. I slipped and fell into the stream as the stone was very slippery when I asked my friend to take my picture... Adei, basah sudah stokin ku... 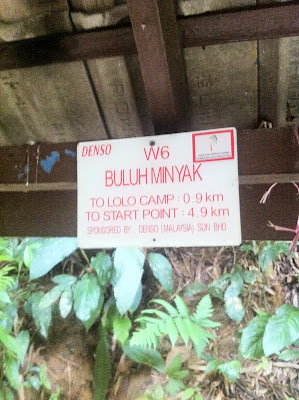 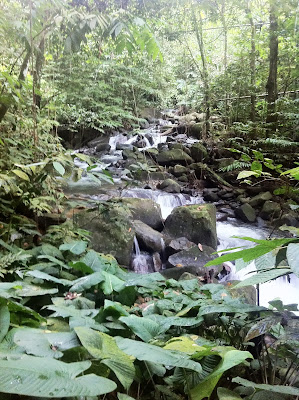 We managed to reach Camp Lolo shortly after that and decided to move on as it stated on the signage that it was 1.2 km away but it will take 2 hours and 30 minutes to reach Camp Pacat. With our high spirits, we soldiered on the steep inclines of slippery vine roots and muddy trails. Luckily it was not wet and super slippery. Zinov and his Ultra compatriots were seen making their way down  when we were still braving ourselves and kept on hiking up. Super fast indeed! @..@ 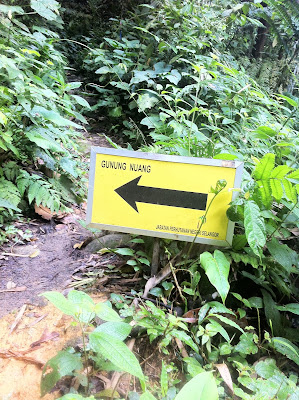 As we could almost see the sky clearly through the trees, I knew that we were about to reach Camp Pacat in no time. However, I totally underestimated the toughness and humidity of Mt Nuang offered as we were running out of drinking water, isotonic drinks and food. My friend was started to feel lethargic and running out of energy as his stamina was pretty low. We decided to call it a day and headed our way back. I had to descend slowly since he's started to feel extremely tired and dehydrated. We had to take several breaks along our way down. He even dozed off to recharge back his energy as we were hiking on an empty tank. I kept on motivating him to keep on moving faster as I could hear the soothing torrential sound of waterfalls near Camp Lolo was getting closer and closer. It was a bliss to sip the icy cold water and we immediately took our dip there to cool off the body temperature and quench our thirst. Thank goodness! \(^O^)/
After that the we continued our journey back to the base camp and stopped again at the 1st waterfall near W6 to take some pictures and soak in the soothing waterfall. Once we were more refreshed and started to feel the hunger pang, we kept on hiking down. I had to stick close to my friend since his legs started to cramp and had to walk slowly. (Tulah liat jogging and exercise bagai lagi, kan stamina dah ke laut..) I brought his backpack since he's getting very very tired. It was getting scorching hot around 2.30 pm. Luckily I brought my cap and shades with me. Finally we reached the base camp around 4 pm. It took us almost 9 hours altogether for our inaugural hike. My calves were very sore after the awesome hike. Sakit tapi nikmat LOL! I guestimated that we managed to cover around 10-12km on that day... Looks like I will have to revisit this Sleeping Beauty once again for my unfinished business, to conquer the summit. Game on Nuang! =D 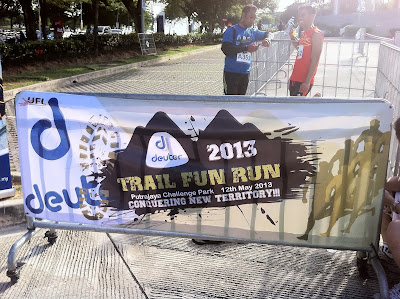 Deuter Trail Fun Run 2013 (Sunday, 12 May 2013)
I almost forgotten about this trail running event until Rashid told me that he'll be sleepover at my house on that Saturday. This is because I could not join this event at first, since it coincided with the actual date of Borneo International Marathon and GE13 date (5 May). After they came out with the new date, I immediately signed up especially when announced that the first 700 entries will be given a Deuter pouch bag worth RM55.00. Although the registration fee was a bit rip off for a 7KM Trail Fun Run, but the running tee was a very good quality one. Love the design too.


On that Sunday morning, we took our sweet time to prepare ourselves, since the event started at 8 am. At first many runners were worried about the microwave heat from the morning sun. Luckily it was slightly overcast and we were running mostly in the shades of the trail. Every runner was given a yellow lily wristband each for a safety reason, perhaps. Hehee... We were flagged off 8am sharp and we were running on the tarmac for almost 2km before we headed for the 1st incline. As I entered the trail route, I had to overtake some of the runners who were started to walk in  as the route was very narrow, only one person. And I fear that it will be getting more congested once the women and junior category started to pour in soon.
I really enjoyed running along this trail. Love the undulating ups and downs trail. All the inclines were insanely steep that I was forced to walk once. I could never get bored running in palm oil estate trail with a breathtaking view of Putrajaya Lake from far. It felt like going for a roller coaster ride along the route. Means more adrenaline pumping actions too for me. Almost tripped twice when my legs were getting jelly. And I stepped on a sharp root @ stump and felt the pain since I was wearing my Pure Flow 2 road running shoes only. Looks like I have to invest in some trail running shoes before my Mount Jerai Challenge Run next month. GoTrail is on my mind right now.


We were served with a drinking bottle, which was not convenient at all. Must be their 1st time organizing this kind of event. After 5km, I could hear the loud sound from the main stage and I knew the finishing line was not that far anymore. So I fasten my pace doing the downhills like mad yet cautiously. Felt like a superhero at that moment with some kungfu steps. Hahaa... Then we were ushered into the final stretch of the route, eight challenging ant hills. It was meant for the extreme mountain bicycle route. I have to tackle all those eight steep bumps on one go as it was such a thrilling experience as I was afraid I might slipped down. Hehee...


I finished my trail fun run in 51 minutes for 6KM . Not bad at all since I've been tormented by the merciless Nuang before this event. It seems that I've been prepared for this run without me noticing it. Thank goodness. Hiking Mount Nuang was a good call after all. Hehee... Fuhhh...

Well, after the race, what else to do other than taking lots of funky post race pictures together with my friends. Many familiar faces were spotted around the venue. Met Khairi Muin, KingKadok, Idot #gengkakilari and Speedy Dayat.
One thing about the event, there was no isotonic water being provided after the run. Just zam-zam drinking water and mineral only. The unique finisher token could have been a little bit heavier because it looked pretty cheap piece of wood. Other than that, it was a very well organised event, with lots of marshalls, volunteers and photographers along the route. Almost got lucky during the lucky draw... Sigh hehe... Looking forward for more trail running event like this next year... Double loops (12K) perhaps? Hehee.. =D