Oh why hello, hi there, hope I`m not too late to update my recent Brooks Half Marathon 2013 race report. Better update asap or else I might left some important points along the way. Hehee... So forgetful of me... hahaa...
Earlier on we pick our racekit along with our  runner friends at The Curve, Mutiara Damansara and did a quick gait analysis at the Brooks store nearby. It turns out that my left feet bear a higher weight than my right feet. Obviously I`m a left handed person... Hehee... Fyi, we did break it the running vest during my 21K LSD Run with the Le Sabuns Ultra LSD organized by Ultra Ray n Ultra Arman the week before the event. It was super comfy!

On the event day itself, I woke up around 3 am... Soooo damn early coz I have to pick Zen, my running buddy who lives in Taman Maluri. Rashid as usual my accomplice went along with me coz he`s not feeling well. As soon as we started fetching Zen, Rashid started to vomit. Goshh, that`s not a good start for doing his anniversary HM for him... Poor creature...

We arrived at the event venue around 4.35 am. The traffic was still not congested yet as I parked at my usual parking spot. A bit far but at least it wont be congested to go out once the event has finished.

Around 5.25 am, the HM runners were flagged off with a gun thingy, a honk I think. Hehee... I was running in a zombie mode the 1st  two kilos as it was still dark. We went through a different route this time around, unlike last year. I noticed we were running in the dark most of the time and were forced to tackle all the deadly inclines while it was still dark. At least it was not that mentally challenging like last year as it was already bright when I ran along the back to back inclines hehee.... Lucky us!

As I ran towards KM13.5 I saw a fallen runner was being treated with a CPR by a kind hearted selfless running doctor and the ambulance came to bring the poor runner to the nearest hospital. Later on it appears that the runner in his early 50s has died due to heart failure. RIP and my deepest condolence to his beloved family and friends. Bless your soul, doctor  for trying your best to revive him.  It was a sad day for us in running community. =(

I noticed that I could smell the green fresh grass cut fragrance all the way. It was so refreshing for me instead of inhaling the diesel and petrol from the non moving vehicles. I didn`t get the honks from the impatient drivers so I was all content. During the run, my right knee started to get very painful and sore. i stopped at the medic for a spray. Then my leg knee started to acting up too. I did felt that the decision to merge the 5KM and 10KM runners with 21KM runners was not cool at all. It was a bad call. If they want to merge all the runners, they should close the road completely. It`s for the sake of the runners' safety.

The last 2KM was the hardest part of all. I almost hit the wall because i screwed up my hydration plan. The water stations was not the same as last year. I was having a bad time as I was sooo thirsty and I decided to take my energy gel without the water. Around 1KM I decided to walk a bit, 300 meter until I finally saw the finishing line. I reached the finishing line in 2:40... Syukur Alhamdulillah... I managed to shave off 18 minutes from my last year`s Brooks HM. (2:58)

Next, it`s time to have a post event photoshoots... Congratz to all WARs for finishing strong, especially Rashid for finishing his HM with a PW despite had to vomit 21 times along the way... Poor him... Anything for a finisher tee...  Congratz to Zen and Fong, WARs for their Virgin HM run... They were even faster than I... Wuuaaa T..T Labi2 pace sangat aku nih... The design, just so-so, but that will do. At least they should put the 21KM FINISHER at the back, instead of only FINISHER.... Sighed! 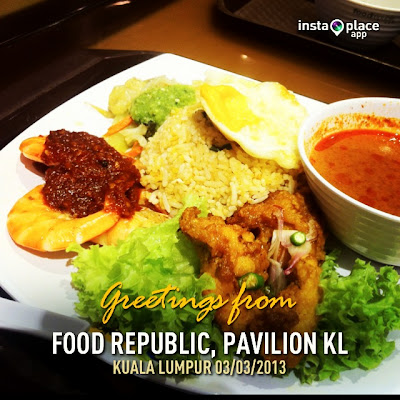