Hello there, happy barakah holy Friday to all my fellow readers and followers, my respected brothers and sisters of Runninghood. Hope it`s not too late for me to share with ya my several running activities. So sorry for not being able to update my blog regularely due to some inevitable circumstances. (Under the weather, sore legs and old injury creeping back, lazy much etc. LOL...) Well, better late than never, right...
So let me get str8 to the point, cerita basi pon basi lah janji sempat document in my Diva Runner blog... Hahaha... How narcissistic of me... LOL... I`ve been volunteering myself as one of the Zombie Runner for Zombie Run Malaysia 2013. It was held in Canyon Paintball Pak, Bukit Utama, Damansara on 2nd February 2013. I immediately signed up without a doubt once I read about it in Penonton. It`s about time for me to become one of the volunteer for this inaugural Zombie Run, the 1st in South East Asia as being depicted by Bangkok Post. Later on, I managed to "poison" Rashid to be one of the Zombie volunteer too, especially it will be held on his 31st Birthday... Yayyy, it`s gonna be a Zombie celebrating his undead day... The day he has turned.. LOL!

Before the D day, we were required to pick our character and request for our wardrobe. We`ve met Lord Chacha, our Lord Zombie (although he didn`t dressed up as one on the event day) and Ms. Sonyah, our wardrobe adviser aka person in charge. I chose to be a Fashionista Zombie (Read: Lady Gaga aka Ah Gua) while Rashid chose to be a Saree Auntie (Read: Minah Estet Mati Masa Menoreh). Both of us chose to be the Chaser Zombies as we would love to chase the runners for their brains life straps. Besides chaser, there were also stumbler and tank zombies. It`s gonna be hilarious and full of EPIC as I was told there`s will be Hooker Zombie and Beauty Pageant Zombie involved too... Sooo excited! The Rise of Tranny Zombies... LOL!
Afterwards, we had to undergo 2 - 3 sessions of training during the weekend consecutively for us to truly feel our characters, to be one with it too. It was so much like a military bootcamp, a glimpse of it I guessed. These 2 training sessions conducted by a famous well known actress Ms. Nicole Anne Thomas really "broke" our bones, just like an undead zombie. It was tough and gruelsome too... We were rewarded with sore muscles all over our body... Goshh, thank goodness we`ve survived...  Fuhhh...Hahaha... ;D

(Disclaimer: The following pictures might make you feel nauseous, jaw dropping and eye popping. Pretty not decent for pregnant ladies and those with faint hearted. You've been warned.... Mwahahaa...)

So now we are ready. Next we must learn on how to make up ourselves and transformed into a very real Walking Dead Brainiac fellas.. Hehee.... The make up lesson by Ms. Felicia Zoe, a rising make up artist, well known for her awesome masterpiece was very informative and the hands-on was cool too. It`s very easy to become an eerie Zombie with some simple tools, bloody real blood and make up. Rashid, as usual, volunteered himself to be the model of the day. Later on, he was featured in The Star. Glam abess hehee!

Moving forward to D day. We reached the venue around 6am after being lost for a while coz the venue was pretty much secluded and cant find it directly, even with a map. Talking about fashionably late... LOL... I immediately try on my wig and  dress while Rashid tried his turquoise saree... Soooo hilarious... Hahaha.. Unfortunately he lost his bangles during the fitting session, so 'tingtong' of him... 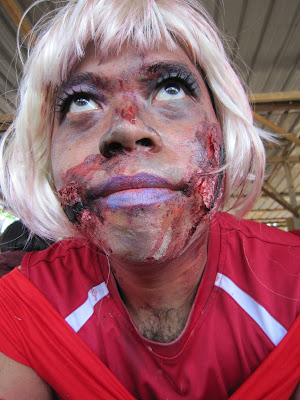 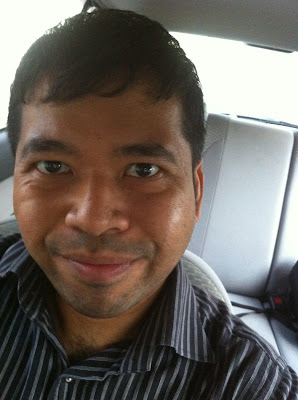 My before and after Zombie makeover.... Grotesque indeed... Exclusively only on this blog... Muahaha..

Since we were a tad late, we dicided to went for the 2nd - 5th (final) waves. I`m not ready to go for the 1st wave coz I really need more final touch up, thus I would like to know the feedback from the pioneer Zombies. The first two waves were like a warm up for me. I couldn`t able to snatch any of the life strap from the runners as most of them were fast and full of dramas, especially the ladies. (God!). Later on, I learned to be more fearless, merciless and managed to grab 5 straps from them. Yayyy... 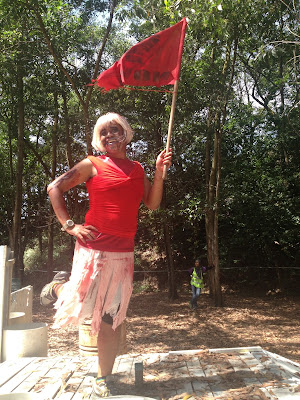 I witnessed so many runners fell down, tripped over, hurt themselves up while running for their lives as the course surface was not even (semi dried mud holes) and full of potential hazzards too , i.e. sharp twigs, dead trees, rusty car and drums. Creepy much. It was getting hotter during the 3rd wave. Even the zombies were dehydrated. Luckily our Miss Beauty Pageant Zombie was the Miss Congeniality of the day. "She" offered us his 100 Plus isotonic drink. Blessed you.  Oh I did managed to scare the socks out of them and made one of my runner friend from WARs, Fadhil sprained his ankle while in the Zone 4. Guessed that my Zombie make up was picture purrfect, even my running buddies couldn`t recognised me at all... Ngeh2... Martylarr masuk bakul angkat sendiri!!! 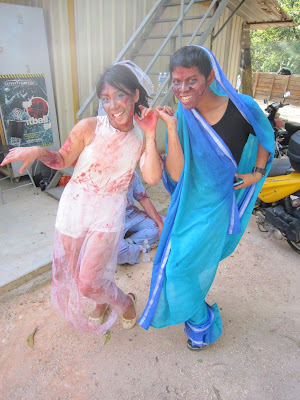 After all the excitement, it was time for camwhoring and photoshoots with my fellow Zombiemates and the organizers, our unsung heroes and heroins. Overall, it was truly a new experience for us. It was one of a kind running event where the Zombies rule in the end... Hahaa... I really had so much fun  chasing runners around. Would I do it again next year? Hell yeahh... Hahahaa.. Just wait for Auntie Cheongsam Zombie then... Kihkihkihh... Oh we were featured in Chera Miche`s blog " Leave Your Own Track" and Felicia Zoe`s too. Check it out y`all... Hehee!!! 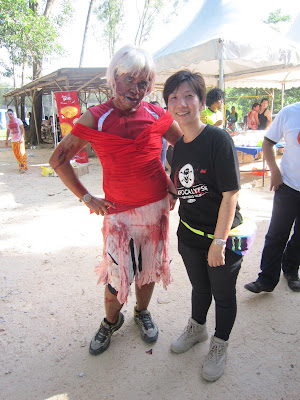 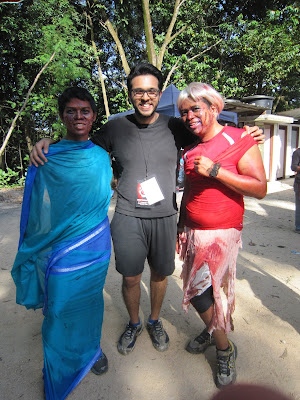 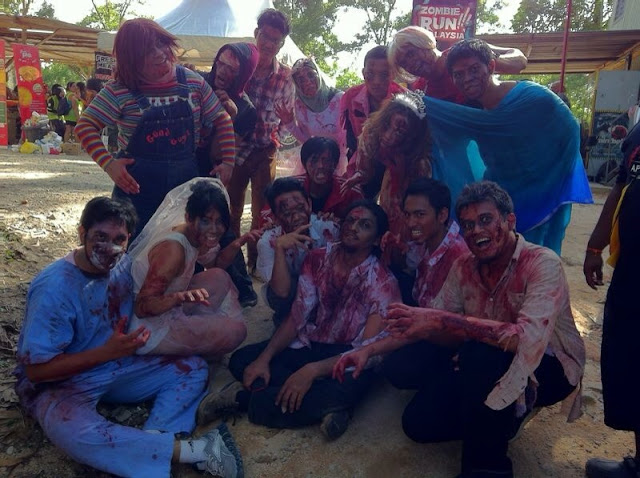 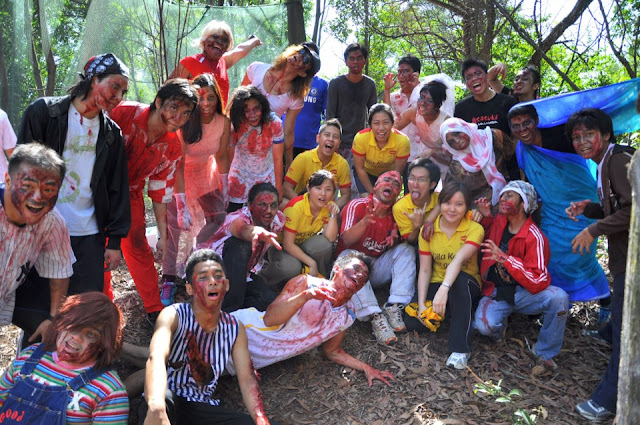