Hello there fellow readers, allow me to quote some of the info from The Bursa Bull Charge 2016 official website itself, "After its second successful run in 2015 the Bursa Bull Charge is back and charged up to renew its claim as the best capital market run in Malaysia.
Last year more than 1,800 runners charged through the streets of Kuala Lumpur and raised a total of RM1.8 Million for charities whose causes include economic sustainability among disadvantaged communities, support for entrepreneurs and the improvement of financial literacy.
This year the Bursa Bull Charge will flood the streets with even more runners, more die-hard supporters, more colour, more energy and more positive rivalry as the marketplace comes together to run for others in the name of fostering a sustainable and inclusive marketplace. The run will follow Kuala Lumpur’s Capital Market Trail, a route through the Central Business District that passes the headquarters of many Capital Market players in our community, a reminder of the sustainability of our marketplace"
Not so recently I had the opportunity to join the 5km route review for the Bursa Bull Charge with other Bursa Malaysia staffs and several other well known bloggers. I was so excited because I never run this part of Kuala Lumpur yet. Thank you so much to the organizer for the invite.
Besides than 5KM Corporate and Future Leaders Challenge, there are also 1.5KM CEO and 2.5KM Corporate and Future Leaders Challenge Relay category. Each category has a different route.
I was not really feeling well on that Saturday morning, 27 August. A bit runny nose and sore throat but I still can run and walk hehee... Dragged myself out of bed and voila! Arrived there a bit late around 7.10 am and I missed the group pre-run photo hohohi... Sigh...
Since I did not really remember the exact route, I just took a wild guess and went with my runner instincts. Strolled along Jln Raja Chulan and off I go towards the first km... I think I missed the first incline at the usual route there... Yikes! My bad

However I managed to keep up and join the rest of the group running along Jln Raja Chulan towards Jln Sultan Ismail. There were so many things to see along the way... Ambank Building, Wisma HLA, Affin Bank, Wisma Genting, MIDF Tower, Wisma Dion and Wisma KFC were among the financial institutions spotted in this route. Once we were running along Jln Ampang you will pass by AIA Tower and it's already 3km. Another 2km to go and I ran towards Dang Wangi LRT, Telekom Museum and took a small lane going up the final incline to St John's Institution. Such a historic red and white school building. Right before I knew it we were running towards the start/finish line in front of the Bursa Malaysia... Yayyy!
Once we finished our run, we were spoiled by the organizer with a hearty breakfast buffet. Nasi lemak ayam berempah, it's hard to say no, right? Plus a super sinful home baked chocolate moist cake with generous amount of caramel as the dessert. Normally i'm not a cake person but Marathon Baker's cake is totally irresistable! Hohohi...
Right before we went back home, we took a group picture together. Overall it was a good route. Mostly flat with only two run able inclines just to spice things up and served as a challenge for the speedsters. The weather was great on that Saturday morning. Overcast and pretty windy especially after the route review run. The main concern is running in the bustling city around 3pm onwards will definitely be scorching hot! Expect some heat element along the route, maybe it will be raining too? Just be prepared and hydrate yourself well before, during and after run too. There will be four Water Stations along the route, including at the venue. ORS and isotonic drinks are important too you know. Some of the stretch will be closed until 4.30 pm, so no worries folks!
I am so looking forward to join this run along with other participants and #run4others, especially those who are in need. It's all for a good cause after all. Don't forget to have fun and soak in the ambiance. Super excited for my first 5KM fun run! Yayyyy see ya there... Let's Get Ready To Charge! 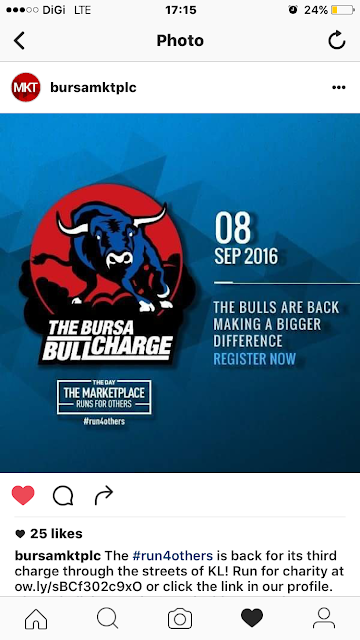