Hola! See, I told ya, I'll be back in Langkawi for this unfinished business. All thanks to Mr Ariff Syafik and the organizer of Bina Darulaman Berhad ~ BDB Climb & Run Langkawi 2016 for the complementary slots for Team Marathon Baker. It felt like a dream came true as I was about to sign up for this inaugural event. The first one in Malaysia that combined climbing the monstrous 4,287 stairs all the way up to Gunung Raya followed by running 15km all the way down. This was the first series of BDB Triple Challenge 2016 Orang dolu2 kata, "Pucuk dicita ulam mendatang..." Hehee... Oh you can read about my first encounter with this tormenting 781 meter of Tangga Helang Seribu Kenangan HERE.
So I took the flight from KLIA2 on the Friday and reached Langkawi International Airport around 3pm. Took a taxi (van) to Cosy Inn Motel for the check in. I chose this motel because it was the nearest and cheapest motel I could find to Geopark Hotel. Just in case if I want to take the free shuttle bus service to the race venue. Plus the Shaz Mamachaksonline and Zet, the Marathon Baker ladies stayed there as well. 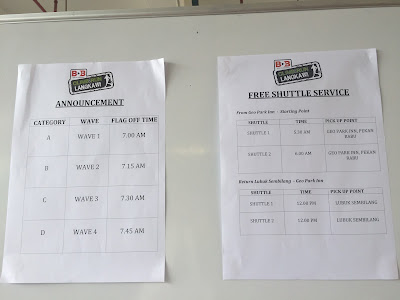 Went to collect my racekit in a jiffy. Everything went so silky smooth. Later I joined the ladies for the sightseeing + makanthon around the island. That one I had to post in a new entry lah. Must elaborate more about the event first hoho... =P

After having our early dinner near the hotel, it's time for me to hit the sack early as I hardly had enough sleep these past few days. Slept like a log throughout the night. Yup, it was a super cosy room for a RM70 per night rate.
Woke up the next morning around 5.30am and felt so sluggish sleepy still. Lazily prepared myself up. Sorry ladies, I was 12 minutes late... Yikes! We went to the race site by our rental car. Since I already knew the route, I drove the car. Reached Hutan Lipur Lubuk Semilang circa 6.30 am. Still dark ok! 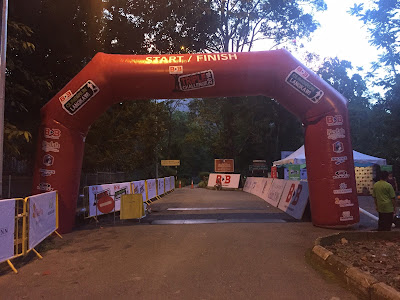 Not many people were around when we reached the race venue. Some of the them were already warming up while waiting for the flagoffs. There were 4 waves of flagoff, 200-250 participants for each wave. This was to ensure the comfort and safety of the participants while climbing the 4,287 steps of Tangga Helang Seribu Kenangan (Stairs Of Thousand Memories) as the stairs could only fit 2 person at one time.
I was on the first wave. The elite wave as I could see all the elite and champion runners were there for the BIG Top 3 cash prizes. Hahaa... It was such a honour to start in the first elite wave although I knew I would be the last person in this wave. :P
By 7.05 am we were being flagged off by YB Dato' Hj. Mohd Rawi Abdul Hamid, the Kedah State Committee Chairman for Religion, Tourism, Heritage and Public Works.

So here we go! Had to run 600m through Hutan Lipur Lubuk Semilang before we had to ascend 4,287 steps of Stair of Thousand Memories. I'm telling you climbing these dreadful stairs for the second time could not get any easier than the first time. Hahaa... With zero stairs training, I just kept on going tackling the stairs. The first 1,000 steps was done easily hehee.... =D
Once I reached 2,000 steps onwards, I kept telling myself that we were half way already. The torture was almost over, I said to myself. Then I reached 2,058 steps that's equivalent of conquering Kuala Lumpur Tower! Yeahhh...
Yeahh, I did saying to myself, why should I torture myself by doing this climb 5 days after my 29th Full Marathon in Hatyai International Marathon 2016. Hahaa... I guess that I was crazy enough to take this challenge since I need to finish what I've started before. Took several breaks to take a breather and admiring the beautiful canopy along the way up. My heart was beating like a war drums when the climb gets tough and seems neverending haha! 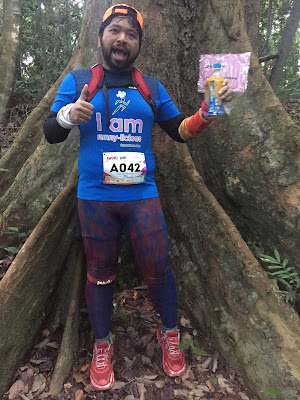 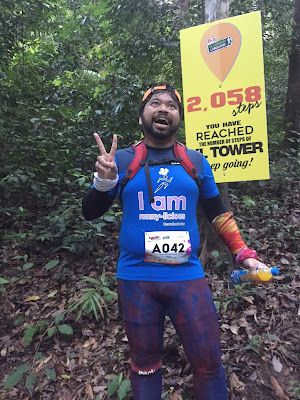 Spotted two flying giant hornbills along my way up. So big that you could hardly miss. They had this special sound just like a pelican or goose, I think. Felt like there's no air around me during the ascend although I was surrounded by lots of unique jungle trees and lots of oxygen.
Went down the mini descend first to reach the first WS after 3,000 steps. Plenty of water bottles for all the climbers. Once I reached the 3,600 steps marker, there's no turning back. Another 687 steps to go! Just keep on moving. Oh did I tell you that I had to dodge all those squeamish "ulat bulu" @ leaf furry worms along the way. They were everywhere, on the hand rails, wiggling on the stairs and dangling in the mid air on their fine threads. Urghhhh.. Must be extra careful for not touching them. Nanti miang baq ang hohohi... Geli geleman i...
As I reached the final 20 steps, it was getting really really steep. Luckily there was a photographer waiting for all the runners near the timing mat at the top! So I had to keep on smiling happily although my calves and quad were already tight and screaming in pain hahaa... Finish strong katanya... Every step felt so heavy fuhh that I had to use my upper body to pull myself up hehee...
Finally I reached the top of the stairs on Gunung Raya in 1h 44min 30sec, 26minutes faster than my first climb in April during the preview route session. I did take less selfies and break,perhaps hohohi... Yayyy! 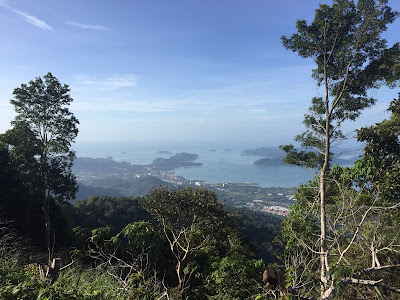 Once I reached the top, I was rewarded with a stunning view! Such a breathtaking view that literally took my breath away. This time around there was no fog or mist at the top. It was so clear. I could see everything from there, including Pulau Tepor. You could see Pekan Kuah and all those boats too. It was definitely worth the climb.

Did not waste my time after took some pictures and replenished myself with some Marathon Baker energy bar, bananas, juicy watermelon and drinking water, off I went for the second part. Running downhill all the way to the finish line. Yup it looks easy but it was not that easy. But first check this video out yaa... Thanks to bro Fadzil for capturing my moment at the top of Gunung Raya hehee....


After the tough climb my legs were still jelly. So I had to jog slowly to keep that momentum. This time around there's no "mountain" cows or monkeys in sight along the way down. Although the downhill route was not that steep but it was still a challenge to keep on running. 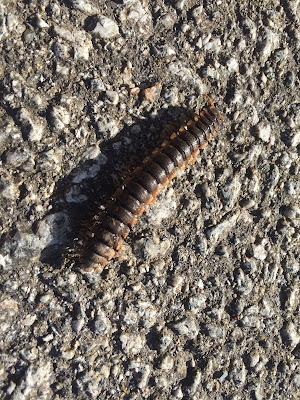 There were several mini inclines along the way but runnable. At some parts, it reminded me of Route 68 Challenge. I just could not stop myself from taking all the pictures during my downhill run. The vantage point from up here was outstanding. When else I could come here again to savour this magnificent view, right?
Plenty of distance markers every 3km or so with several WS along the way down. It was getting hotter and brighter. Luckily there was still some shades at some stretch. Spotted 3 more giant hornbills sitting on the tree top and flying around  gracefully Gunung Raya. No wonder there were several bird watchers and tourists sat patiently at one lookout point. These majestic creatures were amazing to see.
Running downhill felt like eternity to reach the lowland. I dug deep and kept on running while singing some songs just to kill the monotonous run haha... "Percayalah..." It was a bit mental but I persevered!
Once I reached the lowland, I had to run another 4km++ of rolling hills just to get to the Finishing Line. It was hot but still bearable. It's already 11am, what do you expect eh! Kept on run - walk - run mode until I saw the last 1km marker. Finish strong I must hahaa! Finally reached the finishing line under 4h 22min 36sec, yayyy! My Garmin recorded 21.11km total distance! Although I did not get to finish under 4 hours (my early target), but I was happy enough to finish my run injury free, no cramps at all.

The volunteer gave me the finisher medal and I had the refreshments. Icy cold drinking bottle and some bananas. The sweet pisang emas. The strong fast ladies were kind enough to tapau for me the famous Nasi Dagang Pak Malau for my late breakfast. Thank you so much Zet & Shaz! It was really really delicious even without the sawah bendang ambiance hehee...

Being interviewed by the organizer right after the race. Did not see it coming hehee... I kept on saying repeatedly how challenging the route was but it was really an enjoyable climb and run. Totally worth joining this one of a kind race in Malaysia. The inaugural BDB Climb And Run Langkawi 2016.
After the race, it was time for photo session with all my running friends, new and old. Took the shuttle bus back to my motel and had a good rest. Tired, hungry, dehydrated but all I need was a nice cold shower first.
Overall it was a well organised event. Awesome running tee design and finisher medal to attract the participants for joining this rare event. Perhaps they should have one or two portable loos on the top of Gunung Raya. Running on the road side too was a bit dangerous because some parts were narrow. They should put some marshalls or police traffic to slow down the traffic. Other than that, it was superb! The crew, volunteers and medic team were so friendly and helpful. Thanks for the great experience folks!
Kudos to the Race Director, Ariff Syafik for this awesome inaugural event. Looking forward for the next series BDB Extreme Challenge in Bandar Darulaman Jitra on 10 September! I'll see you there, perhaps? 😘👍👍👍