Hi there, welcome back to my humble shabby blog... I would like to share with you guys out there, my beloved running junkies aka enthusiasts out there on my not-so-recent Half Marathon run in Singapore. Just so you know, it was my 1st time experience running outside Malaysia, my 2nd so-called "Runcation" and my 10th Half Marathon to date. Thanks to 2XU Compression Run Half Marathon 2013 which was held recently on 31st March 2013.

I was tempted to sign in this HM run mostly because of the famous 2XU brand name and all the "delicacies" provided, namely the cool running vest, superb finisher tee and last but not least the unique out of the world finisher medal... Besides it was my 2nd time to Singapore after my 1st traumatized road trip before. Don`t ask, don`t tell... LOL!
Me and my partner in crime, Rashid took a flight to SG on Friday, 29th March... Way early in the morning as it was the cheapest flight during the AirAsia promo. Arrived at Changi International Airport around 10am and made our way to our backpacker hostel in Bussorah Street. We decided to stay at The Sleepy Kiwi because it was just a stone`s throw away from the magnificent historical Sultan Mosque. Plus, there were many Cafes and restaurants near Arab Street serving scrumptious halal Singaporean food.

Once we have checked in and had out lunch, we went to pick up our friend`s racekit for the NTUC 350 Run. The REPC was held at Orchard Central. We had some difficulties trying to locate the venue as I have never been to Orchard Road before. It is the most famous road amongst shopaholics as there were so many super massive shopping malls along the stretch. Gosh, I was blown away and my feet were killing me too LOL! Furthermore it was flooded with a very huge crowd on that day since it was Easter holiday. @_@

Let`s just fast forward a little bit. Azim and Faiez, the other dynamic duo checked in at the same hostel as us on Saturday, 30th March. Four of us went to collect our racekit at the Lion Building. Then we've decided to explore Little India and our lunch there. I had this mouth watering Tandoori chicken briyani  while the other were having banana leaf rice. Simply sinfully yummeh! We went to Marina Bay Sand that night and were entertained by a live music from an orchestra. I was already tired and need to hit the sack asap so we went straight to our hostel and called it a day already. All of us agreed to be ready to go by 4.30am.

Now the drama began. Me and Rashid woke up pretty early that morning, around 3.00 - 3.30am. One of our roomate was annoyed by Rashid`s alarm and shouted him to turn it off. Yeah, we runners were the insane bunch, woke up at wee hours. LOL! Around 4.15am, I thought Azim and Faiez were already awake and preparing themselves. Well, think again! They were still fast asleep... OMG! I woke Azim up and he hurriedly went to the shower. I smelled disaster in the making. We might be late for the flag off as we had to walk/run for 20minutes to reach the venue, F1 Pit.

Lucky for us as we bumped into this Singaporean uncle, who was going to the venue as well. Once we reached the starting line, we were released as the 3rd WAVE at 5.50am... Dang! Late flag off means I`ll be finishing it quite late n toasted again LOL... I was trying to give my best when my feet weren't very co-operative after 3KM. Must be still sore and tired after the long walk around SG... Sigh! Suddenly around 6KM, I felt the urge to do no.2 business, although I`ve already done it before in the morning. OMG, I could see all the porta-loos weren't available with a very long queue. As I was running in a park near Kallang, where badly lit and very crowded too, I could see there was a public toilet. Thank goodness! After done with my business, I tried to keep up with the targetted pace. However I felt restless. Every km felt like so far away and forever to reach. T..T

To add salt to the wound, we had to slow down and walked through 2 bottlenecks along the route, due to the construction works. The pavement was in a bad condition too. Very dangerous for the runners, especially in the dark. We were running along Geylang River towards Tanjong Rhu when the jogging pavement was very small to accomodate the large crowd. Some were even walking leisurely on the right side. Haish! I had to zig zag through and even ran on the grass  and tree roots beside the pavement. Azim catching up with me here and we were like racing each other... Hahaa...

I was running along Kallang River and heading towards Marina Barrage (KM17) and was able to see the magnificent Marina Bay Sands from the other side of the river. It was picture perfect moment. Then we have to run towards Marina Bay Sands through Gardens by the Bay. The loop was insanely long and mental too @..@ (Almost want to do walk break here, because it`s shady and I was mentally exhausted too.. hahaa!). I managed to cross the finishing line in 2hr52min... Thank goodness, still under 3hour... I was toasted by the sun along the way although it was only 8-9am. It was already freaking scorching hot!

To summarize my race report, here is the pros and cons.

Pros
(1) The running vest, finisher tee and finisher medal are awesomely nice and worth the fees. Catchy indeed!

(2) Love the tagline, "Unleash the you you never knew!"

(4) Plenty of Water Stations along the route, almost every 2km, providing lots of Pocari Sweat and drinking water, bananas and energy gel. I really love the

Cons
(1) The route in the park was pitch black. I could barely see the pavement and it was very dangerous. There was no source of light or blinkers at least.

(2) Two congestion moments when all the runners had to go through the bottleneck section due to the construction works near the route. When we have to walk slowly, our pace will decrease significantly and time will be wasted too.. hehe..

(3) Some parts of the pavement were in a bad condition. Runners might trip and stumble. The jogging pavement along Geylang and Kallang River was too narrow to accommodate the large number of runners.

(4) Running in this part of Singapore is damn boring. Not many stunning landmark and tourist attraction spots to see, unlike Sundown Marathon`s route. Should have study the route 1st before decide for my future running event.

After the race, it`s a must for us runners to take photo like crazy, flaunting the finisher medal and finisher tee, nonetheless. Hahaha... Because it was worth running here for. Then, we just walked ourselves home and stopped by for a self rewarding recovery drink at the Starbucks. Awesome!

After that, it`s time for us to explore the must visit tourist attraction spots in Singapore. We went to the Merlion Park and walk along the Esplanade. The weather was overcast and friendly enough for us. The view was spectacular... ;D 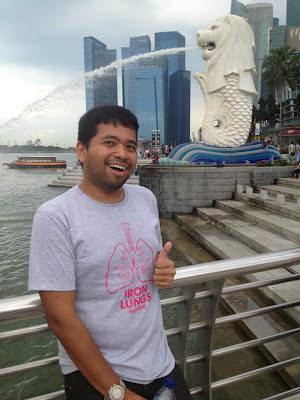 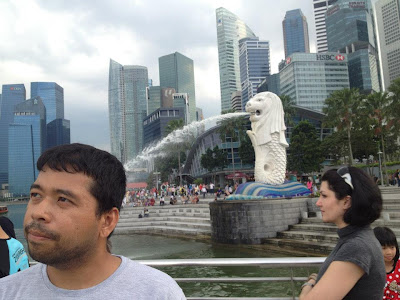 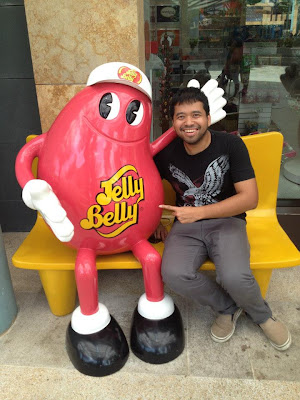 Till then, I`ll definitely be coming here again for TUC, MR25 or Sundown Ultra perhaps? Looking forward to do Ultra here in SG... Should be awesome... Cheers y`all...